Pinsa, the thin and crispy pizza famous in Rome, is the specialty here

by Robert Sietsema Dec 10, 2019, 9:13am EST
Photography by Clay Williams
A meal at Montesacro might include an app, pasta, main course, and a Roman style pizza called a pinsa.

Share All sharing options for: Rome’s Culinary Delights Are on Dazzling Display at Williamsburg’s Montesacro Pinseria

Montesacro Pinseria is a serious Roman restaurant masquerading as a pizzeria. The pizza, of course, is the almost faddish pinsa, an oblong flop of well-browned dough made from a combination of wheat, rice, and soy flour, tracing its roots back to ancient Rome. Part of a mini chain that includes another branch in Portland, the restaurant was founded in San Francisco in 2015, and claims to be the first pinseria in the United States.

Our branch — run by owner Gianluca Legrottaglie, chef Riccardo Buitoni, and wine director Emanuele Tibaldo — lies in central Williamsburg, just above the Lorimer L stop on Union Avenue. If the place seems eerily familiar, that’s because it was the former and much-missed bistro DuMont. Now, the front room is quiet and serene, with a bar running along one side and an open kitchen at the end of the room, so open you can reach in and grab a loaf of freshly made bread, warm, moist, and with a dense crumb.

But a crooked hallway runs around the kitchen to the place most diners settle down: the covered rear patio. With a black interior and bright spotlights, it feels like an airport runway at midnight. The patio seats 70 or so, and potted plants are scattered here and there. Big tables can be easily pushed together into bigger tables, where groups seeking post-work pizza hunker down, with huzzahs rising up to the retractable ceiling.

Let’s ignore the pinsa for a minute. Romans are very fond of variety meats, and evidence of this is a marvelous pig head roulade ($11), composed of smoky and greasy swirls of white fat and pink flesh. There’s also a tripe dish, Roman-style in a cheesy tomato sauce. What’s the difference between it and the famed tripe of Florence? Well, Roman tripe is further seasoned with fresh mint, an herb often seen in Roman cooking. You’ll be seeing more of it at Montesacro.

Unless incorporated onto a pinsa, vegetables ($13 to $16) will not be the most memorable aspect of your meal. Most are grilled or shaved raw — stiff artichokes with stripes of char; fractal Romanesco, also undercooked; and Brussels sprouts shaved like a monk’s tonsure. The notable exception to the meh vegetables is delicata squash. It gets crumbed like tempura, making the mellow orange vegetable crunchy and soft at the same time, and then dribbled with honey and heaped with grated cheese. Get three orders and it could happily be your entire meal.

Pastas play an important, if minor, role on the bill of fare, and all I’ve tasted have been unfailingly excellent. Closely associated with Rome, egg-yolky carbonara ($18) shines yellow in its bowl, dotted with cured guanciale in little salty tidbits and poured over mezze maniche, stunted tubules that trap more sauce than the spaghetti traditionally used. The effect is like breakfast bacon and eggs.

But make sure you examine the easy-to-miss special menu, which flaps on a tiny slip of paper stapled to the regular one. Special pastas have included potato gnocchi, soft as a winter mitten, mired in a fibrous beef cheek sauce that clings in great globs to the pasta, and burrata-filled ravioli lavished with fresh chanterelles and grated truffle pecorino. At $20 for a substantial serving, how can the restaurant afford to offer it?

There are only three proper secondi: a fish, a steak, and a chicken. The waiter warned us away from the steak, which comes in a salsa verde more appropriate to Florentine cooking. You might choose the crisp-skinned chicken pressed under a brick instead, but conventional entrees here will never be the highlight of your meal.

Inevitably, we come to the pinsas. The variety is vast, and the individual diner will pick the pizza with the combination of ingredients that pleases her most. I can see digging the one with broccoli rabe and spicy sausage (Maranella, $20), or the pie that sports tomatoes, fried eggplant, and two kinds of cheese, including the unmeltable ricotta salata (Portonaccio, $19).

I selected instead a pinsa that’s assembled after the pie comes out of the oven, making the toppings warm but not hot. You won’t burn your tongue out of eagerness on the Garbatella ($21), which features wads of really great albacore tuna, purple onions, and caper mayonnaise. Yes, it tastes like the world’s best tuna salad sandwich. Another favorite outlier merits a special box by itself on the menu — focaccia der muratore, wherein a thin layer of pinsa dough sheaths slices of mortadella. For bologna lovers, this is pig heaven.

Besides pizzeria and Roman restaurant, Montesacro enjoys a further identity as a wine bar. The list has many diverting specimens that would go well with pizza. Unfortunately, many tend to be a little pricey for this usage, including a nero d’Avola and an Etna rosso from Sicily ($60 and $70, respectively), reds with a flinty taste issuing from volcanic soils. Other wines come from Spain, France, Turkey, Slovenia, and Chile, but the one that drinks best with pizza, to my taste, is a fizzy and almost sweet red lambrusco ($48) from the Emilia-Romagna producer Vecchia Modena.

On the other hand, you should never be ashamed of eating your pinsa the way Romans often do, with that venerable Roman beverage, Coca-Cola. Only in this case, it will be a bottle of Mexican Coke.

Our review of Montesacro Pinseria Romana 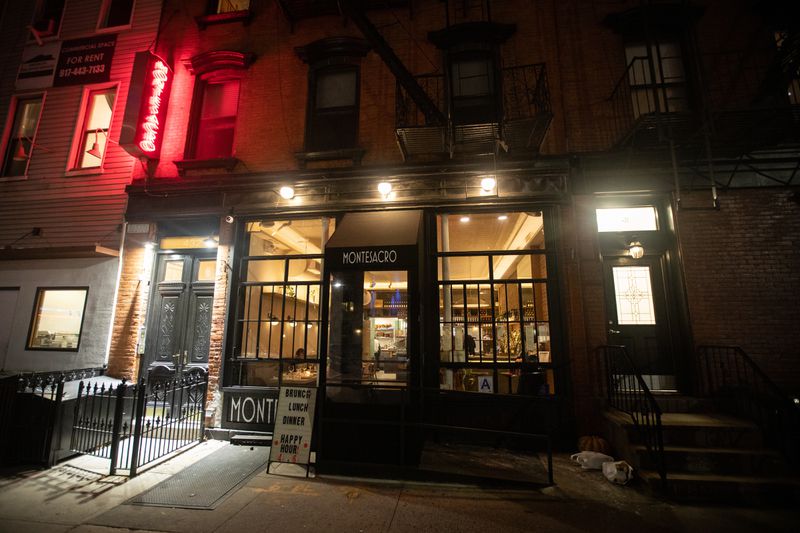 Cost: Dinner for two, including one appetizer, one pinsa, and one pasta, plus two glasses of wine and tax but not tip, $90.

What to Drink: Any sparkling wine by the bottle or glass, white grechetto from Lazio, draft pilsner beer, or bottled Spanish cider.

Bonus Tip: While you won’t have room, there are some commendable desserts, including a panna cotta flavored with dried fennel, and navel-shaped biscotti that come with a free glass of red wine. Drink and dip.

Ipanema Moves Out of Little Brazil and Modernizes Its Menu