Three stars for Biryani Darbar, which offers a stunning lineup of 15 biryanis

Share All sharing options for: A Breathtaking Treasure Trove of Biryani Cements a Jersey City Newcomer as a Star

Review and information for Biryani Darbar

No dish, except possibly the dosa, is as popular as biryani in Jersey City’s India Square — a two-block stretch of Newark Avenue that descends from Kennedy Boulevard to a tangle of highways on the edge of the Meadowlands, and a three-block hop from the Journal Square PATH station.

Six restaurants in India Square specialize in biryani, while many of the other 25 or so dining establishments offer it as a sideline. It’s a composed rice dish dotted with vegetables and morsels of meat or poultry that was probably inspired by the pilaf brought to India with the Muslim Mughal Empire in the 16th century. Many agree that the recipe’s sentimental home is the northern city of Lucknow, but biryani also migrated to southern India, where the dish is often associated with the high-tech city of Hyderabad, though regional variations, many of them vegetarian, exist nearly everywhere in the south.

My favorite place to score biryani in India Square is currently Biryani Darbar. Over a year old, the restaurant lies at the top of the hill, a plain room with wood wainscoting and white walls that gets narrower as you proceed to the rear. The menu offers a breathtaking 15 biryanis, but don’t prepare yourself for a visual extravaganza: If set side by side, they wouldn’t look all that different.

I’ve tried 10, and all arrived in a deep, bone-colored bowl heaped with brown, white, and orange rice, surmounted by a boiled egg, cilantro, and a few rings of sweet purple onion. Each vessel was voluminous, enough to satisfy two or three diners.

Don’t be fooled by the uniformity of appearance: The biryanis here taste distinct, though subtly so, presenting a swath of styles. The variations originate both in Hyderabad and in nearby Vijayawada, two cities where a tooth-and-nail competition over biryani has been raging.

Some with meat, seafood, and chicken, others vegetarian, there are 12 biryanis available in the Hyderabadi style. The flagship of this fleet is Hyderabadi dum chicken biryani ($11.95), featuring pieces of bone-in chicken hidden deep within, and multicolored rice with a delicate flavor. Break up the boiled egg to make the dish even richer, and pour on the tangy yogurt raita and the brilliant chile-peanut sauce called salan, a special feature of southern Indian biryanis.

Other versions of the Hyderabadi style deploy goat, mutton, ground mutton, shrimp, Indo-Chinese chile cauliflower, paneer given a smoky flavor by being pre-cooked in the tandoori oven, and boiled eggs. The egg version makes a particularly good brunch dish along with a cold beer on weekend afternoons, when Biryani Darbar’s dining room fills up with shoppers who have come from all over northern Jersey to buy South Asian groceries, sweets, and jewelry.

The final three biryanis on a menu created by owners Fahad Kolani and John Sehpur, plus chef Ravi Rajendran, are attributed to the Vijayawada style, and you can tell the minute you look at them because the rice is darker and richer tasting. The one called avakai biryani ($10.95 to $14.95, depending on the main ingredient) sports a lacing of mango pickle, while gongura biryani depends on an acidic fruit treasured in southern India. “But it’s not really a pickle in our sense of the word,” Kolani cautions. “It’s more of a green pickle gravy. It shows how much sour flavors are valued in southern India.”

Finally, when the version known as Vijayawada goat biryani ($13.95) arrives, the first thing you note is the stronger scent and darker cast to the rice. Though any biryani can be adjusted for level of heat, Vijayawada biryani is notably more highly flavored than the Hyderabadi versions, a veritable symphony of sweet spices. (Kolani — a Jersey guy who grew up with Hyderabadi parents — explains that Vijayawada biryani involves mixing pickled ingredients and pungent gravies into the rice at the last minute to make the flavor more intense.)

That said, Biryani Darbar has a much more ambitious menu than just its eponymous dish. The bill of fare includes several Indo-Chinese recipes, a full selection of tandoori-baked meats, and northern Mughal vegetable standards like saag paneer and aloo gobi, in addition to a slew of specifically Hyderabadi specialties. Street-food staple chicken majestic ($10.95) is one of those, coarsely shredded and breaded poultry in a lively yogurt sauce colored bright yellow by turmeric. It could become your favorite fried chicken.

The menu is also loaded with vegetarian stuff, including gutti vankaya, baby eggplants with a stuffing of coconut, peanuts, tamarind, garlic, ginger, and assorted spices. The filling tends to escape and threatens to drown the eggplants. Is this a defect? Not really, because as with southern Mexican moles, the sauce is the thing — the more the better. Another intriguing vegetarian dish is methi malai muttar ($9.95), which finds peas dunked in a forest-green fenugreek sauce. If you’ve ever wondered what fenugreek tastes like, this is your best chance to find out.

Yes, Biryani Darbar is a great all-around Indian restaurant, and a good place to discover some of the non-vegetarian south Indian staples that are harder to find in the NYC area, like the aforementioned chicken majestic and the spectacularly sour gongura mutton curry. But your exploration should begin with one of the restaurant’s superb biryanis from Hyderabad or Vijayawada.

Our review of Biryani Darbar 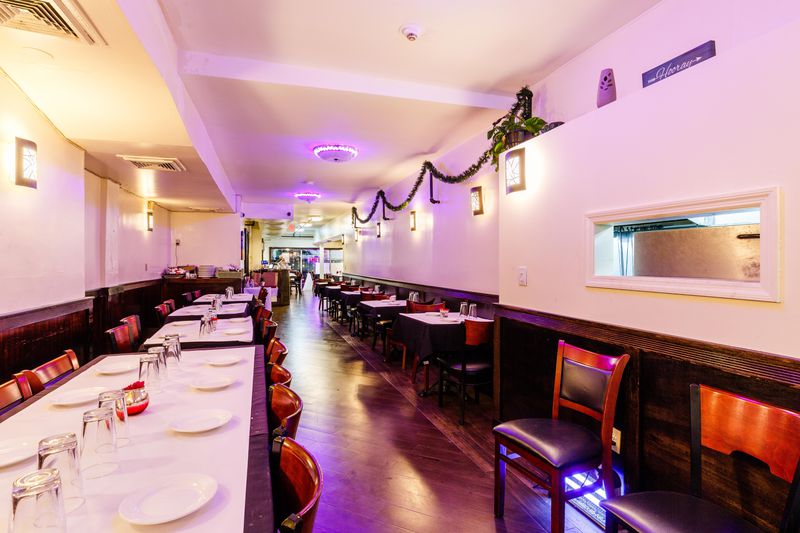 Cost: Dinner for two, including one appetizer, one bread, and one biryani, plus tax but not tip, $50.

What to Drink: Buttermilk, masala soda, chai (sweet or unsweet), and mango and salt lassis are all offered, but I prefer good old Jersey City tap water.