Review and information for Llama San

Ambitious modern sushi is typically a very specific thing in New York. That is: a traditional and expensive omakase parlor hawking exquisitely butchered fish, much of it endangered bluefin, over vinegared rice. Sushi at Llama San in Greenwich Village, however, is a very different thing. The stunner of a Peruvian spot offers just a single type of nigiri, forged from duck, cilantro, and fried banana.

There is no chef standing solemnly behind a counter, doling out pristine morsels piece by piece. Chef Erik Ramirez simply sends his creations into the blonde-wood dining room, where Fiona Apple’s “Criminal” pipes through the sound system. A staffer walks to and fro waving burning palo santo sticks, blessing the space with pungent smoke.

Four nasturtium leaves, so green they’re practically glowing, seem to hover above the plate. Under each one lies the sushi: a mound of coriander rice below a sheath of paper-thin duck breast. The perfume of coriander hits the palate first, then the savoriness of the rice, then the the earthy essence of aged waterfowl. And just when the gaminess starts to creep up, the banana, tucked between the grains and the bird like a pat of wasabi, issues a whisper of sweetness.

This is sushi that’s as worthy of critical contemplation as any toro hand roll. And while Llama San offers an omakase that runs $500 for two after drinks, the duck nigiri is only available a la carte, for $24.

What Ramirez is doing at Llama San, however, constitutes a branch of Andean cuisine with less obvious (if growing) stateside representation. That style of cooking is called Nikkei, a fusion of Peruvian and Japanese sensibilities that’s deeply ingrained into the South American country’s culinary ethos. Scores of Japanese people emigrated to Peru starting in the late 19th century, often as exploited indentured servants, thousands of whom were persecuted and deported to U.S. internment camps during World War II.

Anyone who’s been to a Nobu has encountered some form of Nikkei. Its chef brought worldwide fame to tiradito (sashimi) with rocoto chile paste and filet mignon with zippy anticucho sauce. But while Nobu has turned into a blandly internationalist chain that bills its food as Japanese, Llama San proudly calls itself Nikkei, exhibiting a deeper level of virtuosity in the style.

Ramirez slicks translucent rice noodles in a sesame soy vinaigrette. They slurp up easily until a sucker punch of pepper pricks the tongue. He douses crimson cubes of tuna in ponzu; they seem to pulsate with the nuclear level of soy and yuzu. He pairs fried Iberico pork loin — at once crisp, nutty, and hammy — with a ropy pile of pesto-tinged udon. And he matches scallops with a pool of cherimoya, an Andean fruit that channels coconut as much as it does lychee. The mollusks sport the taste of tangy fruit before giving way to their own sweet, coastal flavor.

His tofu acts as an essay in the colors yellow and white. A rectangular block of soy curd covers a mash of shrimp mousse, while a golden pool of garlicky seafood sauce imparts warmth. Rice crackers hide a pile of tender lobster, displaying a charcoal-grilled singe, and smoky chunks of corazon — no gamier than skirt steak. It’s a surf and turf like no other; the shellfish jus and beefy heart drippings, fortified with oregano and vinegar, enrich a serving of sushi rice underneath.

Hand rolls are not uncommon in Nikkei cuisine, but the way Ramirez prepares them is. He takes soft, heady chicken thigh and wraps a layer of seaweed and rice around it, sprinkling the cylinder with toasted sesame seeds. Tableside, a waiter drenches the entire dish in a silky, chile-spiked walnut sauce, transforming it into a high-wire aji de gallina, or spicy creamed chicken. The combination of poultry, dairy, and spice — thanks to aji amarillo peppers — is as avant-garde as it is nourishing.

Ramirez has emerged as the city’s most studied and satisfying purveyor of modern Peruvian in all its diverse forms. He serves up beef corazon skewers at Williamsburg’s Llama Inn; shrimp noodles and rotisserie birds at Llamita in the West Village; and now, at Llama San, a compact menu of creative and visually striking small plates.

Most people in the dining room will justifiably only order off of the a la carte menu. But Llama San also offers a $150 omakase, a rare South American tasting in New York. The 10-course meal largely pulls from the regular menu and is best for solo diners who want to experience the brilliance of Llama San in a single sitting.

The meal kicks off with a bite of kaluga caviar between two crisps. The kitchen could have easily let the roe stand alone; instead, it’s paired with a swatch of miso manjar blanco — a South American dulce du leche of sorts. Purists might recoil at this combination, but the mix of oceanic brine and aromatic sugars is simply a perfumed riff on a sea salt-laced caramel.

Ramirez also sneaks in an off-menu oyakadon, a Japanese chicken-over-rice bowl, which he crosses with estofado de pollo, a Peruvian poultry stew. For this, he uses gizzards. Japanese restaurants love to highlight the snappy texture of the digestive organ, but Llama San takes a more rustic tact, braising them until they’re barely firmer than a chicken nugget. The little knobs, which flaunt just an inkling of poultry funk, sit sandwiched between an egg omelet and a layer of rice. The flavor profile recalls sweet tamago sushi crossed with rich sausage.

Does one need a hefty plate of wagyu short rib after six previous courses? Probably not, and perhaps Ramirez should consider showing off his stronger dishes, like the surf and turf or Iberico, instead of ending yet another Manhattan tasting menu with this ubiquitous luxury. That said, Llama San sends out an impressively beefy cut, fortified with what might be the world’s greatest potato salad, which is laced with bites of squishy egg and tiny, sweet shrimp.

Ramirez operates with just as much skill at dessert, showering an undulating blob of custard with Fanta-colored satsuma ice and halved gooseberries. The combination speaks to its component flavors: the egginess of the cream, the cool citrus punch of the granita, and the rampant acidity of the pulpy fruit. I ask the waiter if it’s based on a Peruvian dessert. She responds that it’s based on a creamsicle. Right on.

Older, fancier tasting spots cap off dinner with a flurry of petits fours. Llama San instead offers a single bite and a shot of booze: a matcha truffle infused with muña (Andean mint) and a few sips of pisco. The candy’s dusty exterior boasts a tannic astringency, but that bitterness quickly yields to a soft, buttery, grassy interior. The accompanying liquor parries the sugary blow.

A restaurant doesn’t need to send out a mignardise to qualify as “fancy” or “good,” but inasmuch as the wagyu crowd considers this sort of thing as a signifier of luxury, Ramirez and company are arguing that they can tango with the best of them. Indeed, they can.

Our review of Llama San 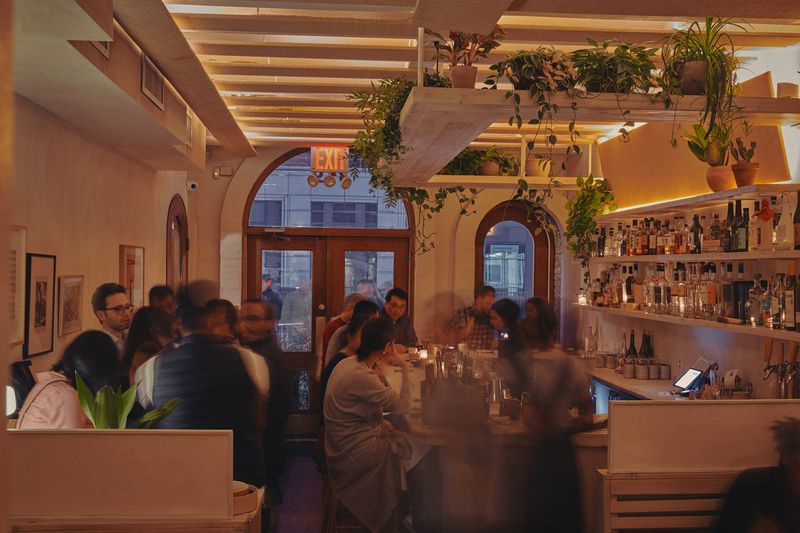 Cost: Most dishes in the $20s and $30s. Expect to spend about $100 per person or more for about three to four courses for each diner. The tasting runs $150 and must be booked in advance.