The Greenwich Village mainstay is seemingly stuck in the past, even with a new menu from chef Victoria Blamey

by Ryan Sutton Nov 19, 2019, 9:37am EST
Photography by Alex Staniloff
62 comments / new
The entrance to Gotham Bar and Grill

Review and information for Gotham Bar and Grill

The sale of foie gras — a fatty indulgence that punches you in the gut, steals your money, and tries to make you feel good about that transaction — will soon be illegal in New York City. Most restaurants, however, won’t have to do much to comply. Force-fed duck livers don’t enjoy as much popularity among young culinarians, a class of hospitality types that turns to nimbler luxuries like uni, abalone, and truffles. In fact, simply encountering foie on a new restaurant menu is somewhat rare.

Gotham Bar & Grill is an uncommon establishment in this regard. Foie takes center stage at the famed American venue. This is all the more surprising given that the Greenwich Village fixture, for the first time in 34 years, boasts an ambitious new chef: Victoria Blamey, who takes over from Alfred Portale.

Blamey lets foie show off its sweet side, juxtaposing it against saltier, chewier ham hock. For a more savory affair, she glazes the product with a layer of truffled seaweed gelee, imparting the stomach-distending, main course-sized appetizer with bass notes of earthiness. And in a third dish, she lets foie take the airier form of foam over poussin. It’s a fine ode to 1996, when Gotham paired this delicacy with guinea hen or squab, or to 2013, when the restaurant featured a trio of simultaneous foie preparations as well.

Excess is the point of this extravagance, and Blamey prepares it well. But as a legacy restaurant looks toward the future, perhaps a wallet-busting old-school indulgence shouldn’t occupy so much real estate on a tight bill of fare. And while the poussin-foie is now gone, there’s still something retro about the larger framework of the venue, a contemporary Greenmarket restaurant serving two big steaks and two types of caviar while offering just a single vegetarian main.

“In a city obsessed with the shiny and novel, Gotham Bar and Grill is an outlier,” wrote New York Times critic Sam Sifton in 2011. It was, in his words, a restaurant that celebrated “stability and excellence.” And while the owners in 2019 decided to seek change — a claim backed up by hiring Blamey — Sifton’s assessment still largely holds true.

Portale, in his early reign, ranked among the most influential and envelope-pushing New American chefs. In the mid-’80s, he acted as an early champion of seasonal, local fare. And more famously, he built dishes vertically, constructing seafood salads as if they were edible Marie Antoinette wigs. But even as Gotham trended more internationalist in the 21st century, its influence waned amid the brash, stripped-down small-plates era of the aughts and beyond.

The acquisition of a younger chef, who built a reputation for whimsical and inventive tavern fare at Chumley’s, could have been an opportunity for a full reset. But notwithstanding a touch of high acid here, a bit of Maine uni there, and smart smattering of chiles everywhere, it’s not clear this is truly Blamey’s establishment. Gotham very much remains Gotham, minus any long-faded excellence.

Yes, the dishes are new, but this is still a big restaurant with big portions, big prices, a bar longer than some entire East Village restaurants, a lounge menu with an epic crab galette, and a fortified host stand operated by four people who look like they spearhead J.P. Morgan’s private wealth management division.

On the way to your table, you pass under puffy fabric chandeliers, past a party of five guys (each of them wearing blue-collared button-downs), past three gray-haired men in suits (two of them order the foie), and up and down a few stairs. A waiter is quick to mention they are sold out of the $90 caviar, and can only offer the $140 version.

Sometimes the food feels in sync with both new and old gastronomy. The kitchen laces beef tartare with confit tomato, showers it with fluffy gran queso, and tops it off with a wavy tendon chicharon. The layering recalls the altitude of Portale’s architectural tuna tartare, but in a way that’s distinctly, well, Blamey.

But on those rare occasions when the menu feels loose and modern, the service takes a strange and stodgy turn. If a party of three has one man and two women, should a host really ask: “Will the gentleman sit in the middle?” Should servers say things like, “I’ll bring a cocktail list for the lady?” Should a waiter really ask me, the only male at the table, about whether to clear the wine list after a female companion does all the ordering? Should he make eye contact only with me when asking to clear a course? Does Gotham require that certain staffers follow Robert’s Rules of Order (1876) in addressing guests by the third person? If so, Ryan Sutton doesn’t like it.

A modern restaurant seamlessly weaves meat-free (or meat-light) dishes into its offerings, prompting diners of all stripes to order them without qualms. Gotham instead sends out dishes that can feel like obligatory concessions to those with dietary restrictions. Beet kimchi ribbons, tomato, and trout roe sit over a pile of stracciatella doing a bland impression of cream cheese. The result is a preparation that tastes like a failed take on a 1980s chevre and beet salad.

Lapsang souchong adds a whisper of smokiness to Japanese eggplant with Sea Island peas, but for naught. The dish is simply a bland, mushy mess (though on another visit, it boasts a more complex roundness and tang). Pea dal, in turn, sit in a rich bath of coconut milk and curry leaf oil. It’s a preparation that begs for naan or rice — or really anything to placate the grainy wallop. At Gotham, it comes with nothing. It is simply a thick, gritty, unbalanced stew of legumes, an incomplete side dish posing as a composed appetizer.

The good news, however, is that the sole vegetarian entree showcases Blamey at her best. She chars Caraflex cabbage, drenches it in brown butter, pairs it with a seaweed gremolata, and throws everything over firm beads of fregola pasta. The dish is a striking blend of starch, smoke, restrained fat, and buzzing savoriness.

Ruth Reichl, in her own three-star review over two decades ago, described the mains as “straightforward,” a qualifier that still feels apt in 2019. Madai (sea bream) expresses itself as a run-of-the-mill, “here’s a clunky slab of overcooked fish” over a zingy green tomato and poblano sauce. Better is slow-cooked lamb shoulder. It shows off the animal’s agrarian musk with greater degree than most fancy spots, while a calabrian chile sauce lights the palate ablaze. It would be a perfect four-bite starter. As a more Herculean main, though, it feels burdensome.

And then there’s the foie gras-laced poussin, whose breast mimicked the texture of overcooked tofu dragged through sand.

At the bar, a shorter collection of dishes shows off the calculated risk-taking that Blamey was renowned for at Chumley’s. Her spreadable boar rillette packs equal parts funk and heat; it is like an American answer to ’nduja. She stuffs smoked sturgeon into little “everything” eclairs for an haute hat tip to Ashkenazi appetizing traditions (currently off the menu). She douses raw scallops in citrus and granada chile, resulting in what might be the city’s most wonderfully pungent and peppery ceviche.

The true showstopper is the crab galette, a riff on the traditional chupe stew of Chile, Blamey’s native country. A puffy disc of pastry yields to a thick layer of pulled Dungeness meat. The flesh is laced with chartreuse, tomato, and chile. While an ordinary crabcake often feels lethargic on the palate, her pie hums with acid, spice, and the rich taste of the sea. On a good night, at least. A repeat sampling resulted in more muted flavors.

For dessert, consider the souffle. No denser than soft meringue, it shows off a whiff of perfumed peach, checked by the farmer’s funk of tart sheep’s-milk yogurt ice cream. A tarte tatin for two does everything that’s expected of it, employing soft, flaky, buttery pastry as a conveyance mechanism for bouncy, caramelized, autumnally aromatic apples.

But pain perdu, alas, functions as a pedestrian elevation of the classic French toast dish, albeit for $15. It feels like a dessert that could come from any fancy restaurant from 2009 or 1999. And that pretty much sums up Gotham. The establishment isn’t so much moving the culinary scene forward as it is acting as an ode to itself. For a restaurant of a certain age and its patrons, that’s probably okay. Let them eat foie gras.

Our review of Gotham Bar and Grill 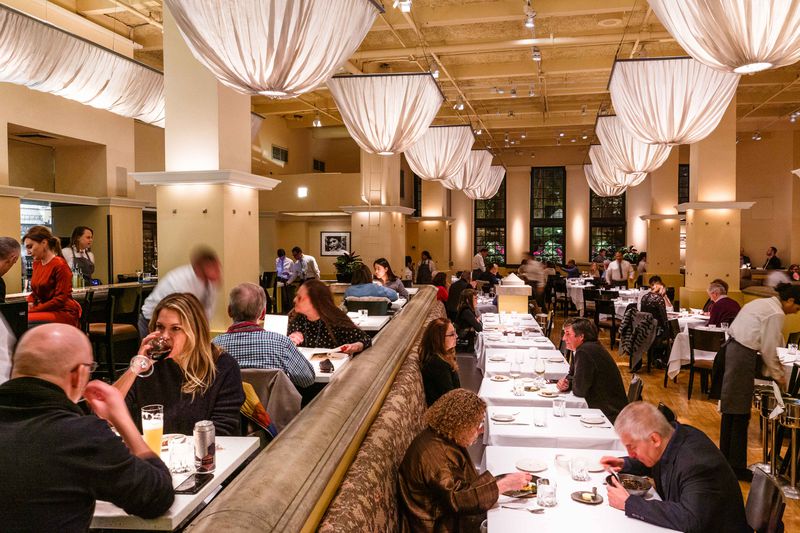 Bonus tip: The restaurant is reasonably busy, and sometimes packed, on any given night, but the expansiveness of the space means that same-day tables aren’t too tough to come by on Resy; Gotham also accommodates walk-ins both at the bar and the dining room.