Review and information for INTERSECT BY LEXUS

On a stretch of 14th Street where boutique workers on cigarette breaks sometimes seem to outnumber pedestrians, there lies a shiny new restaurant, cafe, and retail space. The first thing a prospective patron sees is a sign advertising a brownie, which is decorated with an edible symbol for Lexus, the luxury automaker that encourages humans to gift other humans $75,000 vehicles for Christmas.

The second thing a diner sees at this venue, which serves the food of Gregory Marchand, one of the great chefs of Paris, is a full-sized SUV — an actual Lexus. It sits in the lobby of this space operated by Union Square Hospitality Group’s Danny Meyer, a hospitality guru who likes to choose low-key names for his projects. But this restaurant is named after a car company.

Welcome to Intersect by Lexus.

Anyone who orders a bacon maple scone — heady with the scent of sweet pork — will have a fantastic view of a two-story wall of car parts, and a nice view of the car too. One can learn a lot about that automobile here, from an eight-panel museum exhibit in the back to souvenir cards at the cafe tables explaining how the vehicle “adheres to the Japanese tradition of omotenashi, or hospitality.”

Information about Marchand is slightly tougher to come by, which is too bad, because this restaurant sponsored by a car company happens to serve the most creatively ambitious food to come out of any Meyer restaurant since Gramercy Tavern or the Modern.

One of the pleasures of dining at independent restaurants in 2019 is that they feel immune to the corporate takeover of the city, a town where cheap hot dog stands close to make way for chic juice bars. They serve as an escape from the branded experience encroaching upon so many aspects of modern American life: a president who tweets out photos of fast-food buffets; mobile ads tailored so perfectly that people have begun to wonder whether apps are listening in on our conversations.

Intersect offers no such escape, though the restaurant itself, located on the second floor, is free of any full-size sedans or obvious Lexus paraphernalia. Marchand — who helped dress down fine dining at Frenchie in Paris — is guest chef until the end of March. After that, another chef will take over, and then another every four to six months.

Therein lies what might be the upside to this type of sponsored restaurant. The fact that Meyer operates it without the same financial constraints of a traditional venue, as a manager mentioned to me, means it can afford to experiment a bit more.

The Catalan avant-gardist Ferran Adrià, who operated El Bulli in Spain at a loss, famously toyed with the idea of a corporate-backed space. Museums and opera houses have historically relied on the patronage of rich benefactors — not just ticket prices — to fund new exhibits and productions. So couldn’t the same work for restaurants if the arrangement encourages risk? If it highlights new or out-of-town talent? In theory, yes.

Marchand — whose vision is executed on a day-to-day basis by executive chef Nickolas Martinez and pastry chef Kazuo Fujimura — crafts the type of visually stunning and modern dishes one might expect from a tasting temple charging $600 for two. Here, a great meal costs about $200.

The kitchen aces buttery rectangles of foie gras with long slices of pastrami, redolent with the scent of clove. Smear it on a slice of sourdough, and the result is an open-faced spiced meat sandwich that would make a convert out of even the most devoted patron of Katz’s.

So many chefs use raw fish to show off skillful knife work — turning raw tuna into geometrically perfect squares or rectangles. Marchand and Martinez prefer to practice their hammering skills, pounding fluke into a carpaccio that takes up as many square inches as schnitzel. The fish is neutral and translucent; it acts as a clean delivery mechanism for salt, greens, and crispy quinoa.

Martinez also finds textural correspondence with a bowl of mushrooms, gnocchi, and sweetbreads. Every morsel, simultaneously rich yet packed with acid, yields to a soft chew.

A giant cross-section of cauliflower sits underneath a crumble of seeds, nuts, and dates. You cut it like a steak and drag the florets through a curried puree of the vegetable. And an (oversized) duck breast flaunts a sesame-honey-glazed skin that seems to shatter like candy when cut; quenelles of sunchoke puree impart a haunting smokiness.

As for the desserts, Fujimura serves the type of technically advanced yet delicious sweets that wouldn’t feel out of place at a three-Michelin-starred spot like Le Bernardin, where he once worked.

He takes banoffee, a dense and caloric British pie, and transforms it into a cloud, piping a dulce de leche foam over banana ice cream and compote. One doesn’t eat it as much as inhale it. And he makes a Mont Blanc to end all Mont Blancs. Spaghetti-like swirls of chestnut cream surround a base of creme fraiche chantilly — nothing out of the ordinary there. But at the base is a mound of candied chestnut, an unusual addition that adds a warming, chewy savoriness. And on top of the tiny “mountain” is another twist: a dollop of yuzu-yogurt sorbet, cutting through the sweetness.

It doesn’t do too much good to go on too long about a menu that will change entirely this spring, but it’s worth musing upon some larger aspects of the space — and the Lexus agenda — that bode less well for sponsored culinary establishments.

Restaurants are many things, but they don’t historically act as lifestyle ambassadors for brands whose products many of their own patrons will never be able to afford. Alas, in the past few years, New York has seen Blue Box Cafe, which sells a $32 “Breakfast at Tiffany” inside the jeweler’s flagship, and La Mercerie at Roman and Williams Guild, where hosts advise guests to browse a store selling $16,000 couches.

The self-proclaimed purpose of Intersect, which also has locations in Tokyo and Dubai, is to act as a “unique, permanent space in select global cities where people can experience the ethos of the Lexus lifestyle without getting behind the steering wheel of one of our cars.” It’s not a mantra that screams “restaurant” or “hospitality.”

Perhaps this is why everything feels a little different here. Bathrooms lie behind two sets of space-age sliding doors; toilets come equipped with heated seats. Cool. Anyone who uses those restrooms must pass by that SUV — not to mention a video installation showing sleepy b-roll of that car. It’s... less cool. And since Lexus supports “local and international artisans as they develop their trade,” a retail area sells $350 sunglasses and a reinterpretation of a soccer ball for $410.

The main dining room is a window-free affair, accented with off-white bookshelves, light-brown woods, and a generic open kitchen. The space is as removed from the city as an upscale airline concessioner in Denver, Las Vegas, or Cincinnati.

Lexus should find a way to move at least part of the dining room to street level, imparting a sense of vibrancy to a stretch of Manhattan that’s often bereft of pedestrians after 8 p.m. Instead, all that passers-by see is that cafe space, which can appear as barren as the retail shops nearby. A restaurant should foster a sense of community. The community defined by Intersect feels like a sterile world dreamed up by a wealthy baby boomer from the suburbs. It feels built for aging Lexus owners, with the sound system piping out Billy Joel, Petula Clark, and Jackson Browne.

And that brings up the menu format. Marchand is one of the leading members of the French bistronomie movement, which generally favors small plates (or tasting menus) in casual, affordable-ish settings. It’s a movement that helped bring a more personal and accessible approach to ambitious dining to Paris, and it paved the way for auteur-esque New York venues like Estela or Contra.

Intersect, by contrast, takes the brilliant cooking of Marchand but confines it to a clunky three-course menu. It’s as if the pulsating urgency of Parisian gastronomy is being retrofitted for a stereotypically fancy restaurant in Manhasset, Long Island.

So can a sponsored restaurant work? Yes, but the model needs tweaking. Intersect claims it wants to be an “immersive cultural experience,” and to “to engage, inspire and stimulate young creators whose ideas will shape our tomorrow,” and that’s great! But for now, the only “programming” listed for cultural experience is the Valentine’s Day prix fixe, as well as an offer to “meet the vehicle combining high performance with unrestrained luxury.” It’s referring, of course, to the car in the lobby.

Our review of INTERSECT BY LEXUS 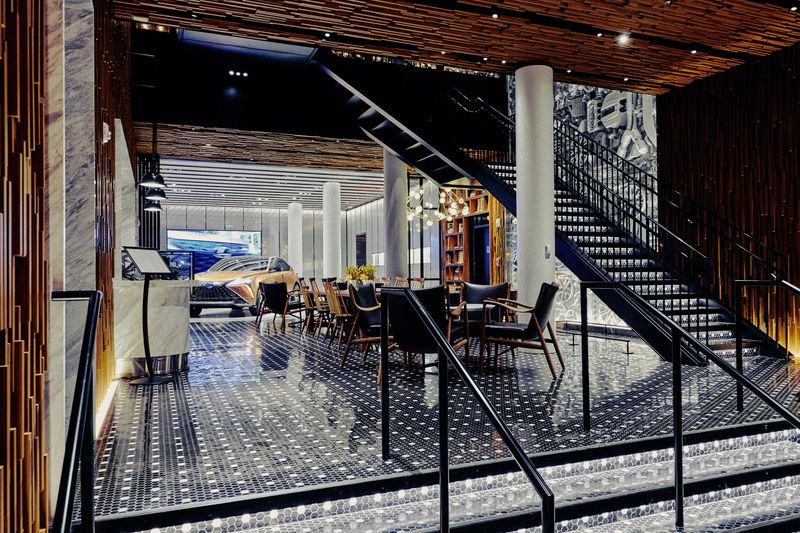 Bonus tip: The cafe space, during the day, is a much more pleasant space than Starbucks Reserve Roastery to type away on a laptop with a cup of coffee and a pastry. The cafe, unfortunately, is card-only, like the restaurant.

Critic’s note: This review is presented without stars due to the regular chef changes