Share All sharing options for: Manhattan’s New Meat Destination Is a Charcoal-Grilling Haven Near Port Authority

Review and information for Farida

Farida claims to be “the first and only Central Asian cuisine in the heart of Manhattan,” according to its website, but that’s not strictly true. As long as two decades ago, Kosher Uzbek restaurants such as the legendary Taam Tov flourished in the Diamond District, regaling customers with plov (rice pilaf), manti (boiled dumplings), lagman (handmade noodles), and shish kebabs, picturesquely grilled over a hoodless charcoal trough placed next to an open window. I’m not kidding! Though the place is still open, the hazard has long since been remedied.

Much more recently, quick-service Central Asian places have popped up, such as Kebab Empire in Hell’s Kitchen, which calls itself Uyghur cuisine. But what Farida claims is not far from the truth, since the majority of our full-service Central Asian restaurants are in places like Sheepshead Bay, mainly night-clubby spots with pumping Casios like Palmyra, Kaifuem, and the original Nargis, which cater to Central Asian and Russian customers and specialize in banquets.

Farida is named after owner Farida Gabbassova-Ricciardelli, who runs the restaurant along with her husband, chef Umitjon Kamolov, nicknamed “John.” The place lies a few steps south of the Port Authority on Ninth Avenue, far from the mass of Central Asian restaurants in Brooklyn. But the couple opted for the Midtown neighborhood, declaring that it’s “always been a destination for international dining,” Gabbassova-Ricciardelli says — plus a great area for visitors.

It resembles neither a nightclub nor a quick-service cafe, but looks like many of the other small ma-and-pa restaurants that populate Ninth Avenue’s restaurant row. The dining room is deep and narrow, with an alcove in front, and a counter in back that looks into the kitchen. Murals and artifacts are distributed evenly, including battle axes, embroidered pillbox skullcaps, hanging caravan lanterns, and antique pistols. The servingware is particularly handsome, with a jagged blue pattern edged in gilt.

A Central Asian menu similar to others in town is offered, though not as complete as those of the Brooklyn plov palaces. Both Kamolov and his co-chef, Firdavs Saidov, hail from Samarkand — one of three most important Silk Road cities in Uzbekistan — while the owner is from Kazakhstan, but they try to have dishes from all over Central Asia.

Each part of Uzbekistan has its distinctive version of plov, the rice pilaf with Arabian roots. Elsewhere it usually comes heaped with ragged hunks of fatty lamb, but here the chefs substitute tender cubes of beef. Not a bad idea, unless you crave mutton’s funky musk. Carrots lend sweetness and fresh scallions are heaped on Farida’s agreeable version ($15), which is the one associated with the city of Samarkand.

The fist-shaped steamed dumplings called manti have a thinner noodle wrapper than usual, and can be ordered either stuffed with oniony lamb or pumpkin that’s slightly sweet, but not too sweet. Make sure you get some of that pumpkin filling one way or another: The same bright orange mince fills the flaky brown turnovers known as samsa ($8 for two), which are sprinkled with both black and white sesame seeds.

That brings us to the kebabs. Here, they’re called shashlyks, the term for Central Asian skewered meats that was popularized throughout Russia in the 19th century. Like Argentines and Texans, Central Asians demand the taste of smoke with their meat, choosing their cuts accordingly. Lamb is the king of kebabs due to its high fat content and ability to absorb maximum smoky flavor, and nothing is tastier at Farida than a lamb rib shashlyk ($9) left on the skewer, strewn with onions, and sided with a couple of garlicky shredded salads. Get fries or naan bread on the side.

The chicken wing shashlyk is also exceedingly succulent, but even better is the onion-laced lulya, which is made with ground beef shaped into an undulant column that ends up leaner than lamb.

But Farida is hardly a health-food restaurant. Take the Tashkent salad ($15), named after another of Uzbekistan’s glittering Silk Road cities and its capital. This decidedly ungreen salad features shredded daikon radish and shredded beef, with crisp fried onion on top, bound together in the Russian style with thick mayo.

Want something healthy? Check out the mellifluous-sounding achichuk, which is mainly tomatoes goosed with fresh dill and onions. The soups are also magnificent at Farida, including a meal-sized lagman with plenty of handmade noodles something like udon.

There are further high points. Shot with chickpeas, the oxtail stew ($21) is a version of the Samarkand wedding dish, but you don’t have to be betrothed to enjoy it.

Farida presents a “greatest hits” of Central Asian cuisine, with an emphasis on Uzbekistan. The food is wholesome and freshly prepared by a chef and crew that display a real zeal for the cuisine. And aside from Texas barbecues, it’s your best chance to get charcoal-grilled meats that taste powerfully of smoke in “the heart of Manhattan,” just as the website says.

Our review of Farida 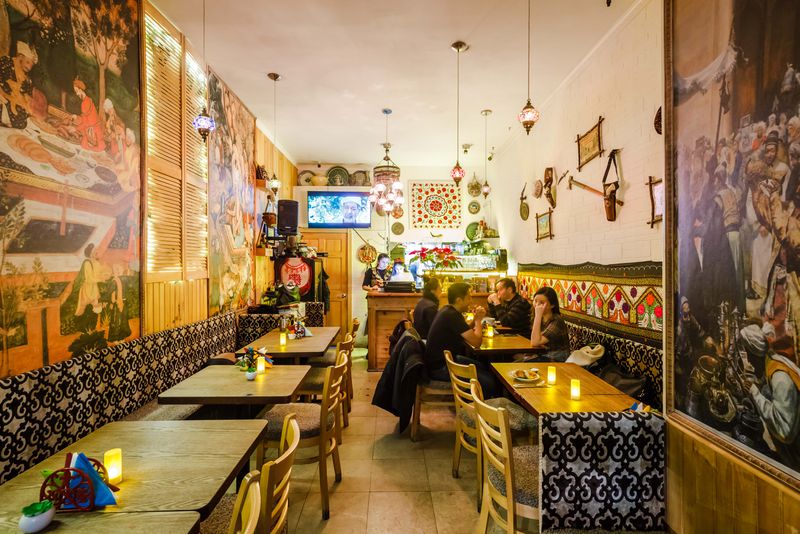 Cost: Dinner for two, including two kebabs, a shared bowl of lagman, an order of pumpkin manti, and a pot of tea, plus tax but not tip, $55.

What to drink: The traditional drink in Central Asia is a pot of tea, available here in green and black varieties, but Russian beer and Tarkhun, an amazing tarragon soda, are also available.

Bonus tip: If you feel overwhelmed by the quantity of meat at Farida, consider ordering the massive pickle plate, which features tomatoes, carrots, cauliflower, and Persian cukes in a light pickle. It provides enough vegetable matter for several diners.