New York Feels Alive at Danny Meyer’s Manhatta, Even If the Food Doesn’t

The sky-high French restaurant is a gift for its stunning views and accessible price point, though the food is less memorable

Share All sharing options for: New York Feels Alive at Danny Meyer’s Manhatta, Even If the Food Doesn’t

Review and information for Manhatta

Right before the end credits of Sam Raimi’s Spider-Man (2002), superhero journalist Peter Parker swings through a sun-drenched Manhattan as if it were a schoolyard jungle gym. Viewers watch from up close as Spidey hurdles himself past a cluster of Midtown high-rises, an exuberant perspective that exaggerates the city’s sumptuous vertical topography. That bit of fiction is one of the first things that came to mind while dining at Manhatta, Danny Meyer’s new French spot in the Financial District; the 60th floor digs afford such intimate views of neighboring towers that the effect is like a comic. Everything is larger than life.

An elevator slingshots diners skyward. Thirty seconds later, they’re nearly 800 feet above street level, gazing down upon the East River and its graceful bridges. Manhatta’s dim lighting and neutral browns (think: wood-paneled floors, walnut-hued tables, and leather sofas) speak to a simple design ethos: Don’t distract from the view. Giant windows provide an IMAX-style panorama, framing the quartz-like asymmetries of Hudson Yards, the polychrome of the Empire State, and the Jenga-like stacking of 56 Leonard — just a hang-glider ride away in Tribeca.

Patrons who head to the main room for, say, lobster quenelles — the bulky crustacean transformed into ethereal fluff — will encounter another treat: the Art Deco 70 Pine. The building’s lithe spire looms so large it’s like dining near a Depression-era fantasy of a spaceship. And if that’s still not vivid enough, kindly put down your Champagne and pick up that pair of binoculars on the windowsill. You can see families watching Monday night football in the chic Frank Gehry building across the way.

New York feels bigger, grander, and more alive at Manhatta, with the surrounding buildings in conversation rather than in competition with one another. It’s a welcome contrast to our increasingly sterile billionaire’s metropolis, where eight-figure dwellings and exorbitant observation decks rise so high that everything below appears tinier and flatter, more like a Google Earth satellite image than the richly textured city we know.

The price is right here too. In the smattering of Manhattan bars and restaurants with serious views, admission comes with an elevation upcharge; one thinks of the $25 cocktails at the Aviary, or the upper floors at One World Trade, where the entrance fees can top out at $130 for two — before food. Meyer, by contrast, keeps things a bit more reasonable; he asks $78, service included, for three courses. Gourmands could easily spend more on a ground-level meal in Midtown.

For restaurants at altitude, Manhatta might be the city’s best deal. And while the dining room books up a solid month in advance, the chef’s counter and a la carte bar, which boast some of the best sightlines here, are reserved for walk-ins.

One can simply swing by the south lounge for a daiquiri at sunset, watching the sky turn pink over the turquoise dome of 40 Wall Street — a neo-Gothic gem from the 1930s — while the Statue of Liberty shines below in the harbor. It’s a view you won’t find anywhere else in the city, and it’s a calming prelude to snacks at the counter, perhaps an order of croque-madames, a trio of deliciously messy mini-toasts stacked with ham, quail egg, and bechamel, for just $10.

There are also tempura scallops on par with the catering operations at a good wedding hall.

Manhatta’s cooking, courtesy of Gramercy Tavern and Per Se vet Jason Pfeifer, sometimes does such an efficient job at not competing with the vistas that you practically forget what you’re eating halfway through a given course. A crimson puck of tarragon-laced tuna tartare, next to a few pretty lettuce leaves, serves as an inoffensive protein delivery mechanism, dissolving on the tongue without much heat or acidity. It is simply food. Cavatelli, in turn, is virtually indistinguishable from other generic pasta dishes around the city; it’s a ho-hum melange of tomato, sauce, and pecorino. It is plain nourishment.

The token vegetarian option, zucchini and squash roulade, is best described as cooked vegetables on a plate.

Pfeifer’s generic approach to French-leaning cuisine is what one wishes first-class airline fare always tasted like, which is to say vaguely fancy and well executed. You work your way through a roasted halibut over beans — a touch overcooked, but not dreadfully so — or pan-seared sweetbreads in a creamy blanquette sauce, the organ meats as silky and soft as fresh mozzarella. And then you continue on with your ogling of the cityscape.

In one regard, such a setup is thoughtful; no one wants anything requiring a tableside “here’s how to eat this” speech while soaking up a once-in-a-lifetime vista. But in another sense, there’s something decidedly stodgy about the implicit premise of Manhatta, which is that diners up high almost exclusively want another safe breed of continental-American fare, another serving of flaky turbot with brown butter and capers. It’s an assumption that has governed the “dinner with a view” class for venues for decades, from the old Windows on the World to the Rainbow Room to the current offerings at One World Trade. And barring a people’s revolution, it’s an assumption that will likely inform the upcoming rooftop offerings at 70 Pine and 15 Hudson Yards.

One wonders: As observatories, by their nature, attract some of the city’s most international crowds, should they not diversify their offerings just a bit? Shouldn’t these tourist-drawing venues act as diplomats to the city’s multitudinous culinary offerings below?

Alas, until that happens, Pfeifer does an impressive enough job with wagyu bavette steak, cross-hatching the top layer of beef to act as a sponge for a rich beef jus. He delivers a very good duck a l’orange, expertly rendering out the fats in the gently gamy breast. And he has a near work of art with his foie gras, a geometrically precise terrine over a layer of barely chewy tete de veau. It is a sweet-salty candy bar like few others.

The meal winds down with desserts, perhaps a competent vanilla souffle or a requisitely sticky date cake. If this were an a la carte menu, you’d probably skip these sweets, but it’s not worth complaining much here; the prix fixe means spending a bit more time overlooking nocturnal Manhattan in its luminescent glory. And while the city doesn’t suffer from any shortage of good Gallic food, Meyer’s ability to make this space unusually accessible is a true gift to New York.

Our review of Manhatta 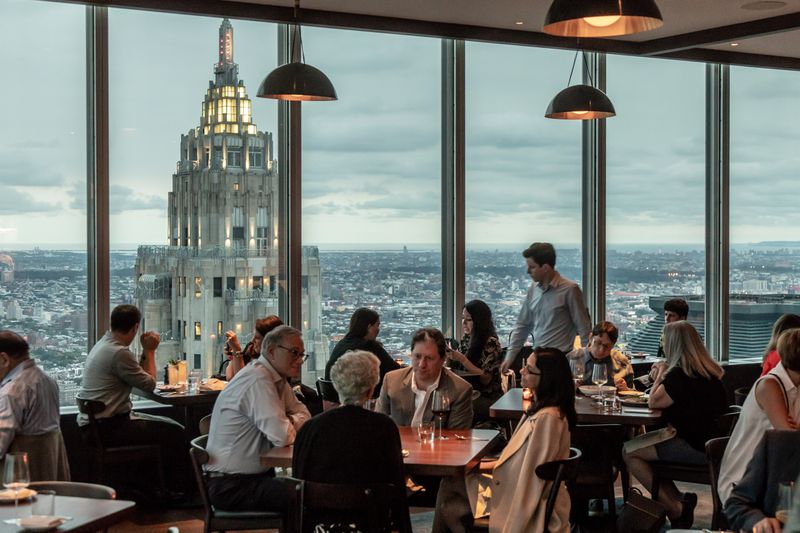 Cost: $78 for three courses in the main dining room or at the bar. A la carte is also available in the bar room, with most small plates under $20. A French onion soup burger is $28. All prices are service included — no tipping.

Bonus tip: If you go as a walk-in (which is likely, given how far in advance tables book up), try calling ahead to get a sense of the wait, or consider checking the social-media feeds to see if Manhatta is closed for a private event, which seems to be the case more frequently than at other establishments.