Share All sharing options for: Smoke and Fire Make Jerked Meat Magic at Peppa’s and Glady’s

You will wait at Peppa’s Jerk Chicken. This is not a criticism of the capable staffers, who briskly take orders, wrap festival fry bread in wax paper, rag on one another, speak in calm voices to customers who spew expletives about the wait (wasn’t me), strategically turn chicken thighs on the fire-spitting grills, and hack the finished birds with a shiny meat cleaver, all with an easygoing efficiency. The wait is a product of a simpler fact. People like the chicken at this Crown Heights counter-service spot. Lots of people.

So you wait too. You listen to the reggae-tinged playlist. You place your order. And you snag one of two tables outside or one of six seats seats inside. Five to 15 minutes later, a counter worker presents you with an aluminum container filled with haphazardly chopped poultry parts. You squeeze Scotch bonnet sauce all over the steaming poultry, which smells of smoke and ashen fat. You crack open a Coke. And you start to devour a bird whose charred exterior and bracing capsaicin buzz make it, without question, one of the city’s finest chickens.

The cost for a small order is just $6.

Island culture is New York culture. And if there’s any doubt about that, consider the following: Nearly 2 million people are expected to attend this weekend’s Labor Day Parade in Crown Heights, an annual West Indian celebration of such epic proportions it earned a line in Jay-Z’s anthemic Empire State of Mind.

One in five foreign-born New Yorkers hails from the non-Hispanic Caribbean, which explains why the city packs such an ample supply of Trinidadian roti, Haitian griot, and Belizean curried shrimp. Jerk in particular thrives along Nostrand and Flatbush avenues in Brooklyn — the heart of the city’s West Indian community. The culinary style traces its mouth-stinging lineage to Jamaica; it developed in the 1700s as a fusion between the pit-cooking techniques of escaped West African slaves and the native Taino spice rubs designed to prevent meat spoilage.

The question of exactly what jerk is in the 21st century, however, has become “open for interpretation,” Island & Spice editor Rochelle Oliver wrote for the Times in July. “Is it a flavor? Is it the ingredients? Is it the way the meat is cooked? The truth lies somewhere in the middle,” she argued. In Jamaica, jerk typically involves seasoning whole hogs or chicken with a pungent mix of ingredients that grow in the island nation’s verdant interior: scallions, thyme, allspice, and chiles. The meats are then slowly smoked over resinous pimento branches, either underground or in a steel drum. In New York, this is the style loosely employed by LoLo’s in Harlem and Glady’s in Crown Heights and, as of this spring, in Prospect-Lefferts — more on that later enterprise in a bit.

Cooking with hardwood fuel, alas, requires expensive ventilation systems and emissions filters. That means jerking in the city often means forgoing the smoker in favor of a gas grill or oven. Miss Lily’s in Manhattan, which sells a bird that tastes like any backyard chicken, is an example of how to do this New York style of jerking poorly. Peppa’s is an example of how to do it expertly.

Kingston-born Gavin Hussey is the person to thank here. He opened the first Peppa’s just south of Prospect Park in 2004 and has since expanded the business with his brother Jason and his daughter Jessica, who share ownership. A Crown Heights location opened in 2016, followed by a Peppa’s near Brownsville later that year. The Hussey family is striking while the iron is hot; fast-casual chicken concepts are proliferating, from David Chang’s Fuku to Seamus Mullen’s Whirlybird to the poultry-centric Made Nice. Peppa’s is better.

The Crown Heights location, the subject of this inquiry, is the only one with seating. And like all the other locations, there are a few non-chicken items, including a pile of goat curry, gorgeously funky with gelatinous meat and thick gravy and a sweet stewed oxtail over coconut rice.

But really, you’ve come here for the chicken. The meat is scored, washed in vinegar, marinated overnight in a rub whose ingredients no one would reveal to me, and grilled for approximately 45 minutes. Certain bites pack a clean poultry tang; others are earthy and woodsy from the flames. The skin comes off with ease, yielding to a gentle chew like a charred campfire marshmallow. The hot sauce causes your tongue to tingle or five minutes afterwards, maybe six. You dampen the heat with a forkful of coconut rice, or a sweet, craggy festival — essentially sweet, fried cornbread. The near-perfect jerk here is the type of preparation that calls into question spending $60 on a chicken for two at a passable brasserie, or $10 on the bland, overcooked birds at Whole Foods.

Peppa’s is a chain worth rooting for.

Strolling by the sophomore location of Glady’s, on the corner of Lincoln Road and Rogers Avenue, means inhaling the heady aroma of smoldering wood. That scent is chef Junior Felix’s beacon. For nearly half a decade, Michael Jacober, a Rhode Island native not of West Indian descent, has been the unlikely public face of the popular Caribbean restaurant. But with the opening of the Prospect-Lefferts outpost this spring, Jacober has stepped back, letting the chef, a native St. Lucian who’s been involved in virtually every recipe Glady’s has ever developed, oversee the space as a co-owner.

Felix ensures that anything carrying the name jerk is jerked the classic way: via a sauna of fragrant smoke. He prepares all the meats over a custom smoker that sits behind the counter, a rectangular steel edifice built by a guy called Alabama Joe. He cooks pork and chicken at 275 degrees for about 2.5 hours — hotter and faster than most American ’cue. The wood selection, in turn, departs a bit from Jamaican traditions. Felix uses a mix of domestic maple and ash, alongside traditional pimento chips, which impart a flavor that some liken to bay leaves.

The jerk, sweet and vaguely piney with expertly rendered fats, calibrated heat, and bracing pungency, is so good that Glady’s is as much in conversation with Peppa’s as it is with a place like Hometown or Mighty Quinn’s. The comparison is important. There’s long been a tendency to overcategorize affordable or unfamiliar foodstuffs, to relegate them to a series of polite “best of brackets” rather than to critique them within the larger context of the city’s dining traditions. And so in the case of Glady’s, its place within the jerk community is just one story; the bigger picture is that it’s one of the the city’s most accomplished barbecue restaurants. And Felix is without question one of New York’s top pitmasters.

Warning: The Prospect-Lefferts sequel doesn’t have the same frenetic, the-waitlist-is-full, everyone’s-cramped-together-jerk-eating energy as the original location. The space here is larger and emptier. There is no wait and there are no waiters; the new Glady’s is counter-service only. And the design ethos is technicolor eclectic with wood-paneled benches, cushy teal banquettes, crimson flooring, orange pressed-tin walls, outdoor picnic tables, and church-like stained glass windows.

My prediction is that the crowds will pick up for a very basic reason: the food is better here than at the original. Glady’s 1.0 cooks with a combi-oven, an expensive device that lets Felix bombard his meats with wet heat, dry heat, and the pleasant fumes of wood chips. The proper smoker at Glady’s 2.0, by contrast, makes a noticeable difference, imbuing the chicken ($9.50) with a deeper mahogany hue. That exterior is wonderfully leathery, a toothsome counterpart to the soft meat. The flavor is all sweet smoke at first — the poultry flavor isn’t as assertive as at Peppa’s — followed by the clove-like warmth of the allspice berry and then bucking heat of the Scotch bonnet. The tongue vibrates in such a way that recalls good Sichuan fare.

You quell the pain with a Pinata, a bracingly tart slush of mezcal, grapefruit, and lime, or a Kid Kreyol, a perfumed blend of Haitian rums, lime, honey and guava. Shannon Mustipher is the mind behind these creations; she’s one of the rare restaurant bartenders who can put together a list of drinks that’s simultaneously original, well-balanced, and food-friendly. The painkiller ($10), that classic mix of rum, coconut cream, lime, and nutmeg, is somewhat sugary on its own, and rightly so. It counters the aggressive salting and sharp aromas of Felix’s jerk pork ($9.50). On some nights the swine’s fats are pleasantly chewy; on other nights they’re softer and more rendered, with a flesh that evokes tender jerky.

Guyanese chow mein — ramen tossed in soy and sesame — is a good way to keep from overloading on the luscious proteins, even if it omits the traditional egg noodles. For flavors that are lighter on both salt and smoke, the goat curry serves as a study in using coconut milk to convey the musky flavors of the ruminant and the gentle heat of habanero. Jacober tells me he’ll soon start exporting the Jerk Center meats to the flagship, but for now, the Prospect-Lefferts location is the Glady’s to visit. May there be more Caribbean restaurants.

Our review of Peppa's Jerk Chicken 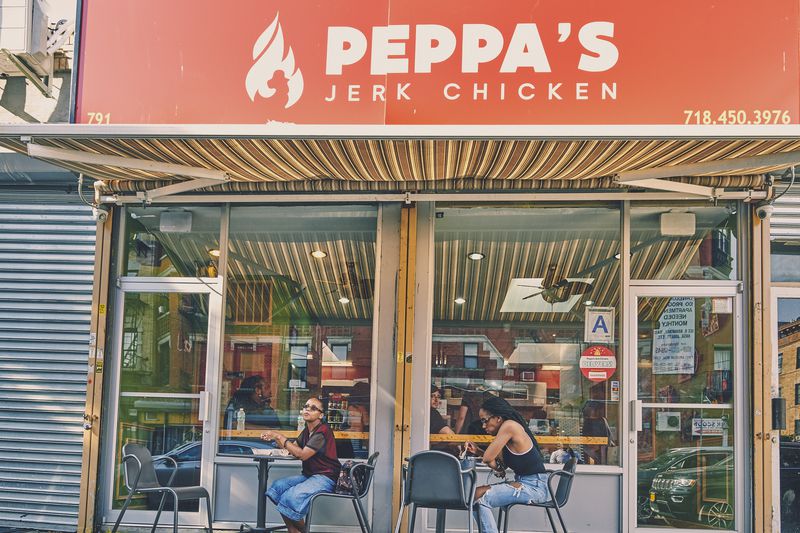 Cost: Nothing over $13. Small lunch orders are $6. Dinner for two should cost no more than $20-$25. There is no alcohol, and no line for tipping on the credit card receipt.

Bonus tip: The beverage selection is not wide here; consider swinging by Gloria’s beforehand, just down the block, for a cup of its excellent peanut punch.

Our review of Gladys Jerk Center 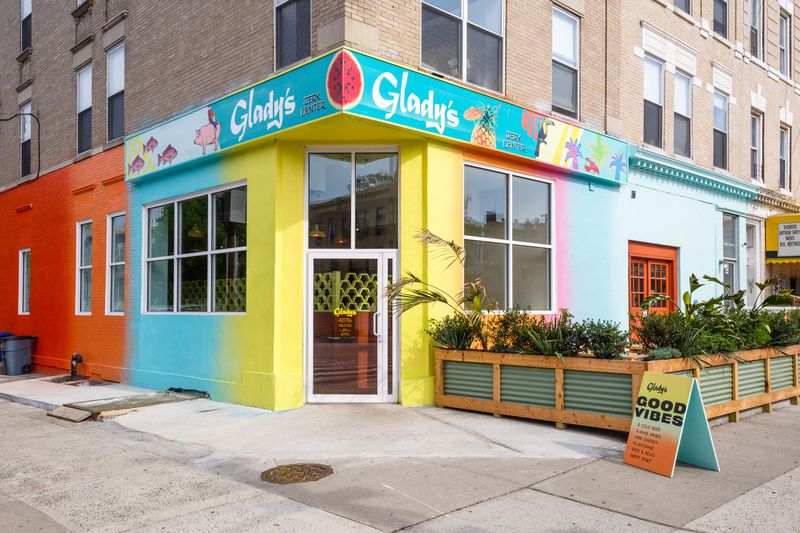 Cost: A full dinner for two, including two meats, two sides, two cocktails, tax, and 20 percent tip (optional at a counter-service spot, but one of the suggested options on the payment screen), will run about $80.

Bonus tip: Glady’s Jerk Center is especially ideal when the wait is long at the original location. And like the original, brunch is served on weekend afternoons, with ackee and saltfish, jerk pork hash, and breakfast roti all on the menu.