Share All sharing options for: NYC Gets a Shot of Hip LA With Wood-Fired Taco Destination Oxomoco

Review and information for Oxomoco

When Salazar debuted in 2016, it shook up the LA dining scene. Located near the Los Angeles River in a semi-industrial neighborhood known as Frogtown, the restaurant combined Mexican recipes and wood grilling in a way the City of Angels hadn’t seen before. The menu evoked the cuisine of the Sonoran Desert, and Salazar’s dining area was a dusty expanse of tree-shaded ground that rose up among the surrounding freeways. No better place to chill outdoors with a couple of charred carne asada tacos and a tumbler of cerveza.

It was an experience worth having again, and one that I’ve sought at various New York restaurants in spite of certain climatological limitations. Claro, though the owner never stepped foot in Salazar, came close, showing that the Gowanus Canal and the Los Angeles River maybe aren’t all that different. A wood-fired hearth flickered in a backyard filled with tables beneath vine-covered trellises, while cicadas buzzed merrily in the background. But though it was outstanding, it still didn’t quite recapture my LA experience.

Another promising contender was Gitano, an open air pop-up on Canal Street that actually originated in Tulum. There, though, the wood-fired bill of fare was half-hearted, and the atmosphere that of a battlefield combat hospital.

All that brings us to Oxomoco. Named after the Aztec goddess of the night, this restaurant recently planted itself deep in Brooklyn’s Greenpoint — not exactly Frogtown, but close enough when the setting sun shoots directly up Greenpoint Avenue from the East River on a sweltering summer evening.

There’s a spare front yard with umbrella-shaded tables that you wish had a tree or two, and a high ceilinged interior from which the vines called devil’s ivy hang down from the skylights. With its cream and beige color scheme, the room seems lavish despite its battered walls and general lack of decoration. The executive chef is Justin Bazdarich, who previously hatched the pizzeria Speedy Romeo.

Besides all the ways it resembles LA’s Salazar, the restaurant is yet another example of the accelerating appreciation of Mexican food in New York — in part due to the taquerias and decades of immigrant participation in restaurant kitchens. Now, the city has an increasing awareness of regional Mexican cuisines and a willingness among diners to pay more for it, as with Italian and Japanese fare in the past.

Though some of the most notable restaurants serving ambitious, expensive versions of the cuisine are run by Mexican chefs (Cosme, Casa Enrique, Atla), it’s a scene that’s also conspicuously filled with people who have come to enjoy the cuisine as outsiders — like Bazdarich and his business partner Chris Walton, self-described “white kids from Missouri.” Claro and Gitano are also examples, as is the Empellon empire, where Oxomoco’s chef de cuisine Matt Conroy once worked. Here, Bazdarich pulled from his memories of traveling to the country; he and Conroy also brought on Oaxacan-born chef Kaelin Ulrich, son of famed Oaxacan chef and teacher Susana Trilling, to consult during the initial months of menu creation.

Despite the goofy unevenness of Speedy Romeo’s menu, Bazdarich has really hit the culinary jackpot at Oxomoco, where the tacos are every bit as good as the ones at Salazar.

Best is barbacoa. At Oxomoco, lamb that has been grilled over wood, slow-cooked, and then loaded into a coarse-textured corn tortilla that will remind you of Los Angeles’s. A relish made of pipicha — a feathery herb that tastes like dirty mint — crowns the jiggly meat, as does a squash blossom that doesn’t add much but sure looks pretty riding shotgun. Sadly, the price of $16 for two tacos is exactly twice the cost at Salazar.

Other Oxomoco tacos worth tasting include pig cheek with green avocado salsa, flank steak with smoked eggplant relish and rubbery cotija cheese (now served with caramelized onions), and tempura-fried hake (now it’s shrimp), reminding us that the Baja Peninsula, the original home of the fish taco, is considered part of the Sonoran Desert. But a vegetarian taco of beets and potatoes intended to resemble chorizo is bland and boring.

Other antojitos, or corn-based staples, are worth ordering, on a menu twice as long as Salazar’s. Whatever you do, don’t miss the creamy charred-carrot tamales, which come pooled in a verdant sauce. The steak tartare tostada ($16), exceedingly fresh beef cut into a ragged dice, is preferable to a tuna tostada that makes too-lavish use of soy sauce, which clashes with the corn tortilla. In fact, I’d skip anything featuring raw fish at Oxomoco, including the hamachi aguachile. What New York City really needs is a full-blown Mexican cevicheria.

Instead, head for the salads, which are an unexpected delight. The heirloom tomato salad ($16) hoists little heaps of snowy queso fresco among its peaks; the dish is one of the most cooling things imaginable. A Caesar salad made with grilled Romaine is not the most original idea in the borough, but here, this commonplace dish has been turned into a top-notch treat, sodden with dressing and tasting almost as meaty as steak.

In fact, the chefs have proven they will smoke almost anything, including fruits that go into the cocktails. That extends, of course, to the full-blown entrees, of which there are only three. All are shareable, and two are spectacular enough you should forego some of the tacos to get them. The whole branzino ($42) has been splayed, grilled, and brushed with a piquant green sauce based the fresh Mexican herb hoja santa. It’s accompanied by Oaxacan mole amarillo, which doesn’t belong with the fish, but makes a nice dip for tortillas.

The best entree is a 32-ounce dry-aged ribeye, a massive hunk of meat at $99. And here we encroach further into Salazar territory. Take one bite of this juicy pink masterpiece, sliced thick, and you’ll feel like you’re dining in an isolated restaurant in LA on a warm summer evening with the traffic streaming all around you. Here, it’s Greenpoint traffic. 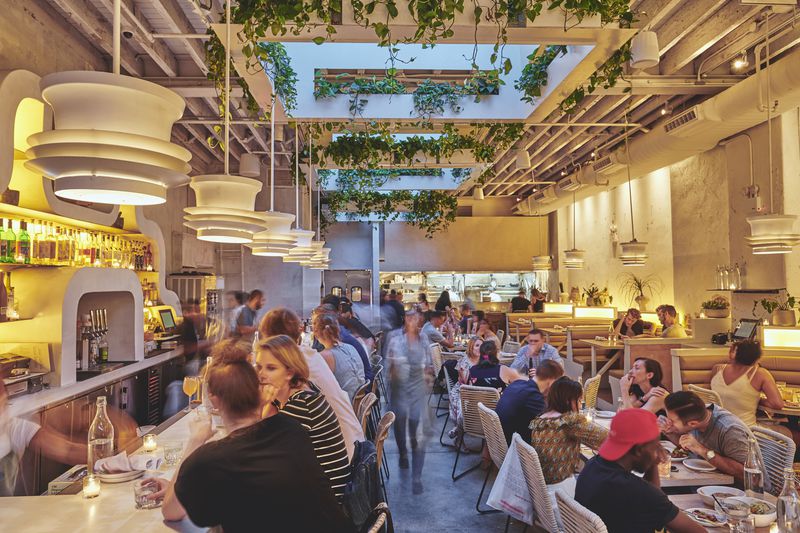 Cost: Dinner for two, including an heirloom tomato salad, two barbacoa tacos, a grilled branzino, and two cocktails, including tax but not tip, $115

What to drink: The margaritas are particularly luscious, including one made with smoked peach and another featuring watermelon juice and hoja santa.

Bonus tip: The menu leads off with four snacks that are something of a bargain, including roasted red-skinned peanuts with garlic and chiles ($3), and dried and smoked mango ($4). Both are good for filling up, on a menu that’s more expensive than it ought to be.