The sleek new Prospect Heights restaurant delivers on Iranian flavors with a stunningly complex saffron rice, but service and other dishes are still uneven

Share All sharing options for: Sofreh Is a Flawed but Vital Newcomer to NYC’s Persian Scene

Review and information for Sofreh

When rice was primarily a staple, “a stomach filler, a vehicle for other foods,” it was, and often still is, “simply cooked by steaming,” author Najmieh Batmanglij writes in her excellent A Taste of Persia. But as modern cultivation methods developed over the centuries “the grain itself became a luxury,” she states, stressing that this was the case in Iran, as in Asia. Her geographic comparison is an astute one. The most expensive rice is generally sushi rice; aficionados tend to comment on its vinegar and temperature levels as if they were praying to a first-growth Bordeaux. But during whatever little discussion there is about Iranian cuisine in New York, rice itself is rarely mentioned as the complex indulgence it can be.

The process of making saffron rice can involve rinsing the grains up to five times, parboiling them, steaming them, and gently scorching the bottom layer to form a nutty, golden crust called tahdig.

It’s a recipe whose steps are as precise as those of a more heralded paella or risotto. And when made correctly, as it often is at Sofreh, a modern Persian spot in Prospect Heights, it is as worthy of anything that an omakase chef anoints with tuna belly as part of a $250 tasting.

The rice is firm, almost al dente. Like a mound of good caviar, the grains roll around on the tongue separately, without clumping. The dish smells richly of butter. On the palate, the flavor starts as vaguely sweet, and is then followed by the unmistakable pungency of saffron. It is not difficult to find decent saffron rice at the city’s kebab-heavy Persian spots; it mostly comes free as a side dish. At the skewer-free Sofreh, by contrast, this masterful version justifiably carries a separate charge, steakhouse style. Even next to gently griddled patties of ground beef in a pomegranate sauce, the strikingly nuanced rice steals the show.

Sofreh is an ode to the multitudinous flavors of Iran, from fruit-studded meat plates to sour ash soups to its use of rose in everything. It is also very much a work in progress. Food shows up before drink orders are taken. Drink orders take ages to arrive. Crumbs and errant splotches of mint-oil-infused eggplant puree (pretty delicious stuff) can sit on the table for uncomfortably long periods of time before things are wiped clean. Tahdig, sold separately from the saffron rice (as is the norm), exhibits the texture of a plastic toy.

And poorly cooked meat dishes leave the kitchen more frequently than they should; I’m thinking of a sad gray lamb shank and arid beef meatballs that tasted like they died under a heat lamp.

But then you take a bite of dill- and cilantro-studded rice, and Sofreh’s problems seem to fade away. You’re willing to look past the inconveniences when you tear off a ragged, sesame-studded chunk of sourdough tabrizi and dunk it into what looks like a bland, monochromatic yogurt sauce. That puckery dairy hides a dose of refreshment in the form of diced cucumbers — a typical pairing at local Iranian restaurants — and a less common squish of sweetness from a fistful of plump golden raisins, an addition that’s common in the chef’s native Isfahan.

The chef-owner in question is Nasim Alikhani. She ended her law studies at Tehran University in the years that followed the Islamic Revolution, leaving for the States in 1983. In the New York decades that followed, she worked as a nanny, cooked for Persian families, catered, opened and sold a printing business, went back to school, and, during the six years it took to ready Sofreh (briefly: Landmark regulations got in the way), attended culinary school and traveled throughout Iran.

Designing the restaurant was a tripartite effort with her husband, Theodore Petroulas, and art director Rozhia Tabnak, whom Alikhani described as “like a niece” during a phone interview. The family-like collaboration yielded an unmistakably sleek venue: Gray tables, walnut chairs, calligraphy carved into the walls, a bathroom plastered with pulpy Iranian movie posters from the 1970s, and swooping arches in the bar area that recall the great Safavid architecture of the 15th century. The stark white bar acts as a stunning background for a bright rose fizz, a pink-hued highball that transforms gin, lemon, cream, and egg white into pure, fragrant, effervescent froth. It is a fine accompaniment to a relish of pitted olives, a mind-bender of a starter wherein the briny vegetable is tamed through a sweet slick of pomegranate molasses and a crumble of soft walnuts.

New Iranian restaurants in New York are a rarity, a reality that won’t be helped by President Trump’s travel ban, which indefinitely prohibits the issuance of immigrant or non-immigrant visas to citizens of the Islamic Republic.

And while New York boasts the country’s second-biggest population of Iranians behind Los Angeles — where the diaspora is the largest outside of Iran — most local Persian spots tend to serve reasonably uniform, kebab-laden menus, often in stodgy white-tablecloth settings. This older class of venues, from Persepolis to Ravagh, ranks with with classic steakhouses and Korean barbecue spots as some of the best places to eat meat in New York.

New York, however, lacks the pulsating diversity of LA’s Iranian community, packed with cafes, sandwich shops, bakeries, ice cream parlors, and even a Persian pizzeria. In this regard, Sofreh’s more contemporary cooking — and bare tabletops — functions as a compelling change of pace. Alikhani’s cooking also serves as a vital counterpoint to the city’s larger Middle Eastern culinary scene, where the diverse foodways of the Muslim majority region are often filtered through the lenses of Israeli-born chefs like Einat Admony, Meir Adoni, and Eyal Shani.

Alikhani stands poised to help local Iranian food evolve. She says her dishes are elegant takes on traditional homestyle preparations rather than, say, riffs on what’s coming out of the kitchens at Tehran’s more cutting edge-restaurants.

For example: She prefers not to fully immerse meats or fish in liquid, as is common in Persian cooking. Instead, she slowly cooks a melange of plum, saffron, and barberries by themselves, preparing the chicken separately, on the griddle a la minute. The result is a supremely crispy and flavorful bird, with a sauce underneath that bursts with muted sweetness. She does the same for halibut, letting the pan-seared fish speak for itself, New American-style, atop a puree of onions, herbs, and tamarind. The mixture vibrates with a type of sourness that is quintessentially Iranian and straight up Wildair.

If rice is where Sofreh (usually) excels, desserts are where it dominates; its saffron ice cream is simply smoother than elsewhere. Its yogurt parfait, topped with a neon orange-carrot jam, could easily take on spendier versions at fashionable breakfast spots around town. Its puckery faloodeh, icy vermicelli with rosewater and lemon sorbet, lacks the cloying sweetness that brings down this affair at other restaurants. And a pale white-rice custard packs a wonderfully coarse, horchata-like texture to convey the lemon-tinged flavor of cardamom.

Sofreh, despite its flaws, is a vital addition to this year’s already strong crop of new restaurants.

Our review of Sofreh 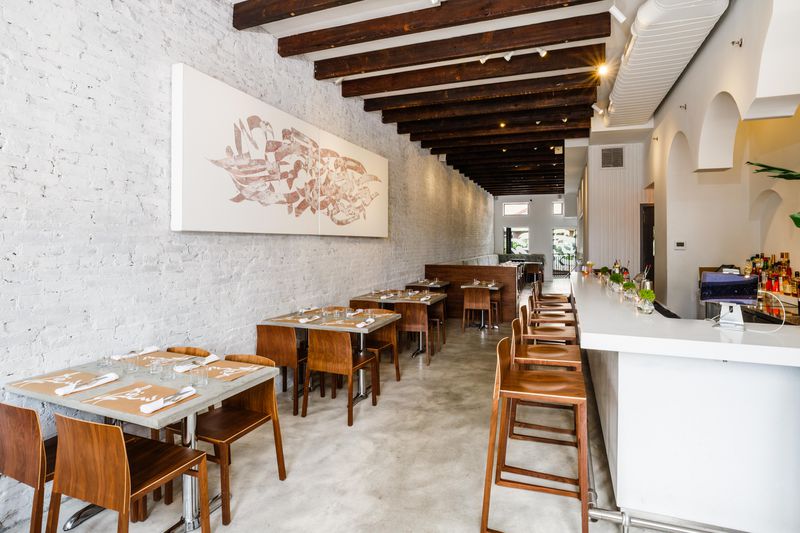 Cost: Starters at $14 or less, with all but one main (the spicy fish) under $30. Desserts are $8. Sofreh is a touch more expensive than other Persian spots, but is priced on par with most contemporary New York restaurants.

Bonus tip: Those who enjoy Sofreh really should consider the city’s other fine Persian spots, including Ravagh and Persepolis, two venues that are distinctly less crowded (if less hip).