Review and information for Bajeko Sekuwa

New Yorkers are already familiar with a wealth of barbecue traditions — and their associated starches. Eat Jamaican jerk chicken at Peppa’s and expect a sweet doughnut called festival. Texas barbecues like Hill Country dole out slices of white supermarket bread, while in Uzbek kebab joints like Cheburechnaya, the parabolic cracker-thin flatbread noni toki will probably make an appearance. So you shouldn’t be shocked when your Nepalese barbecue rolls in on a bed of puffed rice.

Located right on Queens Boulevard, the main drag of Sunnyside, Bajeko Sekuwa (“Grandfather’s Barbecue”) is the first international branch of a restaurant originating in the mountainous republic of Nepal, sandwiched between India and Tibet. The chain traces its roots to a grilled meat shack that opened 38 years ago near the Kathmandu airport. It attracted enthusiastic customers — according to the website — but also flocks of crows that proved such a nuisance to aviation that the shack had to be moved.

Dinanath Bhandari founded the company that’s now run by his son Chetan, a chain that currently comprises 13 restaurants in Nepal, as well as our own orphan branch, where Nepalese-born Surendra Rayamajhi is chef. The dining room sports a peaked ceiling, rustic wood rafters, and a lighting motif that suggests glowing village windows. A bar at the end dispenses cocktails, wine, and beer, while a native kitchen is mocked up by the front door. On top of the wood hearth a fosi (narrow-mouthed copper pot) and a karahi (wok-like cooking vessel) are perched.

Single item servings of barbecue known as sekuwas ($9.95 to $14.95) form the crux of the menu. As mentioned previously, these charcoal-grilled meats are served on puffed rice, which absorbs the grease and juices. They’re sided with a small undressed salad and a few pieces of root-vegetable achar (pickle). Due to agricultural conditions and a nomadic past, vegetables remain limited in Nepalese cuisine.

Your barbecue choices are confined to chicken, goat, hyakula (mutton), and bandel (wild boar). Pick any of the last three. One of the most appealing features of Bajeko Sekuwa is that it presents meats that are underexposed here. Yes, the mutton is as funky as you might wish, while the boar favors fatty belly meat, almost tasting like pig but not quite. (The menu also offers the same boar in steamed form with seasoned salt and a chile dip. Skip it.) Sadly, the actual Nepalese barbecue part of Bajeko Sekuwa’s menu is small compared to the rest of the menu.

The balance of the bill of fare falls into three categories, including distinctively Nepalese dishes, Indian-Chinese offerings, and food from northern India. The latter includes tandoori selections that, I suppose, might be considered part of the restaurant’s barbecue mission. Into this category fall pink and slightly charred tiger prawns, a delectable deal at $15.95 for seven. The usual tandoori chicken and its clay pit pals are also provided.

Bajeko Sekuwa distinguishes itself from the dozen or so Nepalese cafes in Jackson Heights and Elmhurst by being more meat oriented. Nevertheless, a handful of starchier dishes are available, which are the main focus of most Himalayan menus in Queens. These include the wonderful bhatmas sandheko ($5.95) — crunchy fried soybeans tossed with scallions, garlic, and lemon juice to make one of the world’s best bar snacks. And yes, there are momos like those that fly from carts near the Jackson Heights subway stop.

Momo fillings run to vegetables, chicken, and goat, and one should spring for the optional chile sauce that forms their perfect accompaniment. But even better is jhol momo ($7.95 to $11.95), which immerses the thick-skinned dumplings in a sesame soup something like tahini. It’s so good, you’ll lap up the remaining liquid. But the thukpa are a big disappointment. Instead of the usual ragged homemade noodles, which look like they were torn by a cook in a hurry, this restaurant’s version seems like overcooked spaghetti.

Yes, Bajeko Sekuwa is a place where you should head for the unusual stuff. The bone soup ($5.95) is a delight, resembling the bone broth so newly popular in Greenwich Village, only loaded with goat pieces. “Tauko fry” is a catalog of goat face parts that will leave you trying to distinguish ear, cheek, and lip. (The same assortment is less beguiling in its boiled form.) Avoid the Indian-Chinese food. Dishes like chow mein and fried rice are better at the local Chinese carryout, so go for the gingery goat biryani ($13.95) instead.

While the Indian fare like palak paneer and chana masala make some the menu’s tastier vegetarian options, one is better off getting those things in one of the Punjabi steam table joints that dot the neighborhood. Although, come to think of it, the best thing on the menu, in addition to the barbecue on puffed rice, is an Indian regional dish.

Utilizing a creative spelling, Bengoli fish curry ($14.95) originates in the Bengal region of India and Bangladesh, a stunning mince of freshwater fish in a supremely creamy sauce of mustard oil, onions, and tomatoes. And that mustard oil — a signal ingredient in Nepalese cooking — leaves an enjoyable tingle in your throat with every swallow.

Our review of Bajeko Sekuwa 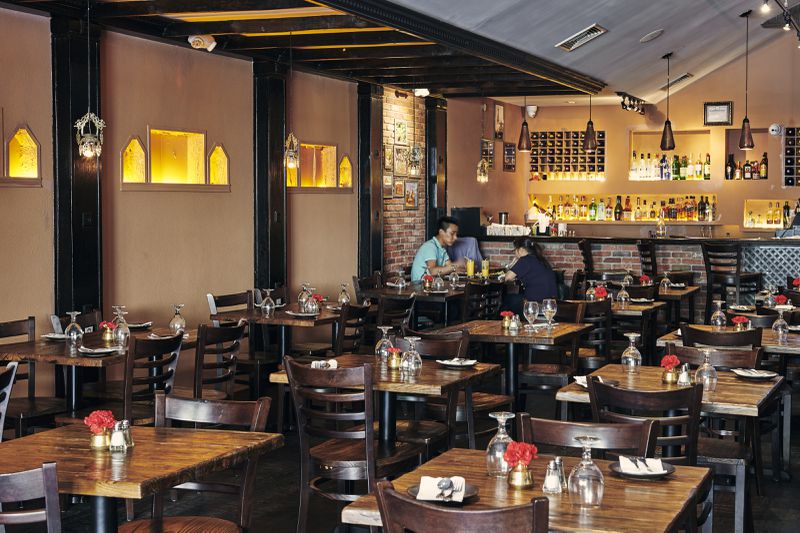 Cost: Dinner for two, including fried soybeans, Bengoli fish curry, and goat sekuwa, plus two beers, including tax but not tip, $50

Bonus tips: You may be tempted to use this place as an Indian restaurant, since the renditions of Punjabi dishes and tandoori meats and vegetables are up to par. But eating the specifically Nepalese stuff is more rewarding. The restaurant is particularly adept at entertaining offal lovers and big groups.