Anthony Mangieri’s once-supreme pies have lost some of their luster, especially at $25 apiece

When Andrea Clurfeld of the Asbury Park Press reviewed a small Jersey Shore restaurant in 1997, she used the type of exuberant yet technical language one might associate with a French fine dining palace. Except this was a humble pie joint — Una Pizza Napoletana. The baker was Anthony Mangieri. The ingredients were imported from Italy. And the recipe for the naturally leavened dough was “handed down by the gods,” Clurfeld wrote.

Mangieri, alas, would shutter his first pizzeria. He relocated to the East Village in 2004, at a time when the city’s top pizzerias were Brooklyn stalwarts known less for showcasing top-tier products and more for following their own traditions. But the crowds came to Una, paying $17 for the margherita. In 2009 Times critic Frank Bruni called the cherry tomato pizza the city’s best — less than two weeks before Una 2.0 unexpectedly served its final pies. Mangieri was moving Una again, this time to San Francisco. His priest performed mass at the restaurant on opening night. He initially charged $20 for his creations, eventually upping the price to $25. When he closed it last year to move back to New York, local food writers penned eulogies whose tones suggested the premature death of a beloved humanitarian.

It’s hard to think of any extant pizzaiolo, other than Chris Bianco, who has been the subject of such critical praise over the past two decades. And it’s almost impossible to think of a single other American chef who, instead of building a small empire, has chosen to live the life of a solo craftsman, closing his successful restaurants whenever he moves. This is what brings us to the Lower East Side, where Mangieri has partnered with chefs and restaurateurs Fabian von Hauske and Jeremiah Stone to open Una 4.0. It’s with a nod toward statistical probability, rather than cynicism, that one supposes it might not last forever.

And it’s with a nod toward reality that one realizes his pies aren’t as good as they should be, not at $25 apiece, and not in the crowded, experimental, ingredient-obsessed, regionally focused pizza biosphere that is contemporary New York.

Una’s new digs suggest a futuristic diner crossed with a place of worship. There are stark white walls, black floor tiles, bare brown tabletops, emerald green chairs that fall over easily if you lean back, gray screens arranged in Mondrian-like patterns, and a pizza oven spitting fire from behind a glass partition. How sepulchral. Mangieri stands behind that partition, making pies. Patrons watch as he molds the dough, applies the toppings, and pours olive oil from a copper cruet. He uses a metal peel to methodically rotate the pies in his oven, momentarily lifting them (to even out the cooking) before extricating them from the flames.

His movements are efficient, elegant, hypnotic. And his bread is without equal among the city’s Neapolitan spots. The pie’s outer rim is as fluffy as a fresh doughnut, releasing steam when torn. The crust is only gently blistered, with a subtle sourdough tang. It’s the stuff Mangieri puts on top of that pie — subpar imported mozzarella, too much parsley, uneven salt — that often make the main event a letdown, however. Such an oversight would’ve been a problem of critical proportions under any other variant of Una, where only the only items up for grabs were Mangieri’s four or five pies, plus beer or wine.

But Una 4.0 spreads its risk, boasting a slightly longer menu that bookends the baking with starters and sweets. If one were to rank things, the chief reasons to visit are, in this order: the ice cream, the tiramisu, the small plates, the natural wines, the three tomato pizza, the marinara pie, the cherry tomato pie, the air conditioning, and then the margherita, which you can quite frankly skip. This Lower East Side spot, in other words, generally functions better as a modern Von Hauske and Stone restaurant than a classically minded Mangieri joint.

Ice cream is among the chief summertime draws of any tristate pizza parlor, and so it’s worth noting that Von Hauske’s are among the city’s most electric. For the plain vanilla variety, he laces the dessert with a sucker punch of sodium, leaving an aftertaste that recalls the salty milk at the bottom of a bowl of corn flakes. For pistachio, he uses a Turkish paste that balances the product’s deep nuttiness with its heady perfume. And for all his ice creams, he builds his bases without egg, spinning equal parts cream and milk from Five Acre farms, resulting in a dairy drop kick so concentrated it almost tastes malted.

One wouldn’t be faulted for dropping by Una for just for dessert — any dessert. Von Hauske brings life to the tired staple that is panna cotta by decorating it like a birthday cake, garnishing the outer rim with a fragrant ring of strawberries that have been sliced, whipped, and juiced. He also serves a rum- and Cynar-laced tiramisu, dense with ladyfingers and mascarpone, in a chalice, giving this kingly and complex confection the regal serving device it deserves.

Starters, compliments of Stone, are equally destination-worthy, even if they’re more in loose conversation with the concept of a pizzeria than a kowtow to the form. The chef cuts raw filet mignon into thick strips and showers them in olives, pistachios, and a carbonara’s worth of parmesan. He uses ceci not in a chickpea salad, but rather to surround a circle of yuzukosho-spiked raw lobster, a wickedly delicious tartare. To channel pepperoni, he spreads spicy ’nduja sausage on a plate, topping it off with rounds of watery turnip and peppery nasturtium leaves; the effect evokes an edible version of Wassily Kandinsky’s abstract circles.

Some will find such appetizer experimentalism to be incongruous with traditional pizzas. I’d counter that it’s a valiant study in how refinement and rusticity, artistry and craft, deserve to coexist. Why? Because when I’m swigging back a honeyed Tokaji or frothy lambrusco, the fact that these small plates seem to belong to a separate restaurant take a back seat to a more important reality: They’re delicious.

If only Mangieri’s pizzas — particularly the toppings — were as reliably delicious as those at Razza, Roberta’s, Sullivan Street, and so many other spots that charge $7-$12 less. Una’s filetti pie, to be fair, is still impressive, with the gorgeously pulpy cherry tomatoes acting as foil to a pile of (not terribly milky) buffalo mozzarella. The margherita, somewhat creamy on certain nights, can suffer from curds as flavorless as Polly-O string cheese on other evenings; Mangieri occasionally uses cheese so low in moisture its tastes like saline rubber.

His marinara pie is more smartly composed, with a layer of fragrant garlic and olive oil yielding to the gentle fragrance of San Marzanos. The fruit doesn’t boast the compelling acidity or assertive aroma found in comparable pies around town; this is a more restrained study in the tomatoes’ complexity. Sometimes this is maddening; you often need to close your eyes and concentrate to divine the nature of these tomatoes. And sometimes, for just a bite or two, it all comes together; the pulp mixes with a salt crystal, resulting in a concoction as aromatic as rose.

Then on another night the marinara is underseasoned. So you ask for salt. A waiter shakes his head. This decision, for a nanosecond, is understandable. One wouldn’t walk into an opera house and tell the soprano to sing louder — but there’s something to be said for using a hearing aid. For some, salt is that hearing aid for flavor. Even at the city’s most expensive sushi parlors, chefs often give diners a tiny ramekin of shoyu, just in case. It’s a nice act of humility, and a comparable gesture at Una would go a long way given that dinner for one (a starter, a pizza, a dessert, two drinks) can run nearly $100 after tax and tip.

The right move is to swing by on Fridays for the new “Concetta” pizza. Mangieri blends house-made tomato paste, roasted tomatoes, crushed San Marzanos, and pecorino. It’s an epic ode to the classic New York-style tomato pie. The flavors and textures are alternatingly jammy, tart, sugary, pulpy, umami-rich, and floral — at least that’s the case if you pick off the forest canopy’s worth of parsley, an herb whose bitterness overwhelms the tomato’s subtleties.

Pizza-making is tough, manual labor. Diners who click on the “about” section of Una’s website will encounter an article about Mangieri discussing the mental stress of the job and the toll of inhaling flour and smoke. For these sacrifices we should all be paying more. But it would help Mangieri’s case for higher prices if he were making better pizza.

Our review of Una Pizza Napoletana 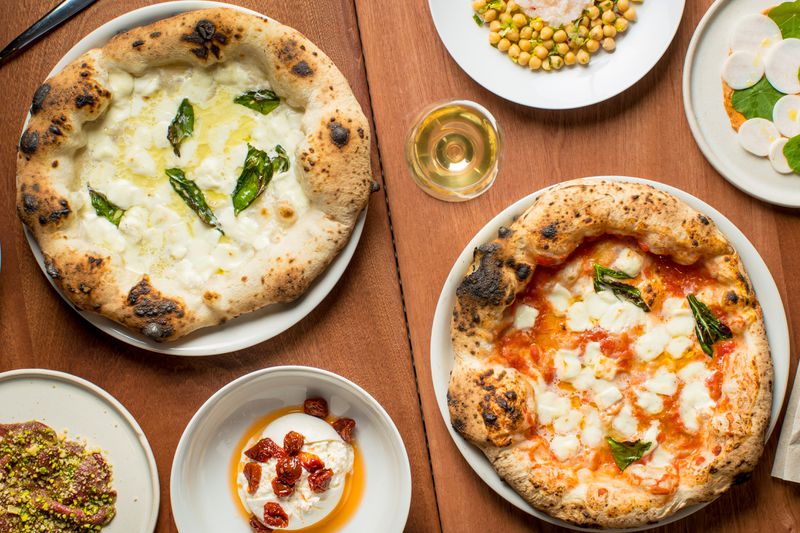 Bonus Tip: The chief reasons to come here are the small plates, the desserts, and the natural wines. For pizza, Friday is your best bet for the three-tomato pie.