Review and information for Le Sia

Within view of Cooper Union, across from a Ukrainian church, and down the block from McSorley’s Old Ale House, New Yorkers gather for a nightly festival of shirt-staining shellfish.

This is Le Sia, where Dungeness crabs, their black eyes peering over a cast-iron skillet, sit in a heady garlic and oyster sauce. Crimson lobsters, with claws bigger than human hands, sop up a gravy of tingly Sichuan peppercorns. And scarlet crawfish, at least 15 per pot, absorb a blend of pickled Thai chile juices. Waiters take by-the-pound orders via iPad, and the kitchen sends out the platters in 10 minutes or less, leaving beer-swigging patrons to gnaw on errant maritime appendages as Destiny’s Child plays in the background. Life is good. And affordable.

Ordering a collection of shellfish is a frighteningly easy way to burn through a wad of cash in New York. Multi-tiered fruits de mer platters run up to $170 at Balthazar; Catch in the Meatpacking District charges $92 for king crab; and Oriental Garden commands dizzying prices for elegant preparations of crystal crab or geoduck. But the packed Le Sia asks just $15 for a pound of crawfish, $30 for whole lobsters, and $5 more for Dungeness. An entire dinner for two will doubtfully cost more than $100 after tax and tip.

Le Sia, a surprisingly accessible seafood spot, translates as “Happy Prawn.” The Mandarin sia, or xia, also hints at the word for crawfish, xiaolongxia, the restaurant’s speciality. The bottom-feeding crustaceans, sometimes known as mountain lobsters, crawdads, yabbies, or mudbugs, have been part of Gulf Coast Cajun cuisine for centuries, but are still relatively new to the China; they were brought from the States through Japan as food for bullfrogs in the 1920s. And while crawfish were once the bane of regional rice farmers, they have become, largely over the past few decades, part of a multibillion-dollar industry that employs over 5 million, primarily in the Hubei, Anhui, Hunan, and Jiangsu provinces.

The Chinese are now the world’s largest producers, and possibly consumers, of crawfish.

Cooks at Le Sia prepare the xiaolongxia in the typical mainland fashion, boiling the creatures in aromatic broth before wok-frying them in one of six sauces, the most famous of which is “13 flavors.” Supposedly developed in the 1990s in Xuyi, where there’s an entire museum dedicated to crawfish, the sauce involves an umami-rich blend of clove, star anise, angelica dahurica, nutmeg, ginger, fennel, black cardamom, Sichuan peppercorn, dried tangerine peel, cinnamon, and galangal. The hodgepodge of spices are used to fortify a shellfish stock that’s cooked until it’s as dark and flavorful as the brown goo that spills out of a scorched shrimp head.

Patrons don plastic gloves (don’t even bother with chopsticks) and black bibs (which will save your shirts, not your pants). They rip the crustaceans in two, push out the sweet tail meat with their thumbs, and slurp up the heady, spicy juices from the thorax. Gloves are licked, noses are blown, and chile-triggered sinuses are cleared. The Financial Times reported last year that this style of crawfish eating was highly social because it effectively prevented people from checking their phones; I’m embarrassed to say it didn’t stop me or anyone else in the room from doing precisely that.

Le Sia is the brainchild of debut restaurateurs Tina Chen and Yang Liu, as well as chef Zac Zheng, who previously worked at the spendy Peking duck chain DaDong. Their goal was to serve the crawfish they grew up with in their native China, though they’re also filling in a larger New York gastronomic gap; American crawfish boils aren’t in high supply in the city, be they of the lean Louisiana variety or the Viet-Cajun garlic-butter-lemongrass style popular in Houston.

It wouldn’t be an exaggeration to name Le Sia one of the most exhilarating places to eat shellfish in the Big Apple.

The setting is simple: a single rectangle of a room with wood-paneled floors, a brick wall, metal stools, and a few firm leather booths. Large shellfish platters sit on most tables; smart guests supplement those feasts with grilled skewers, from chewy five-spice-dusted squid legs to crispy chitlins to beef tendon as soft as gummy bears to cumin-laced balls of juicy, fatty lamb.

In deference to the mudbug traditions of the Gulf Coast, there’s also a crawfish jambalaya — really a perfectly greasy fried rice, studded with bits of sweet tail meat. The grains are best dunked in one of the boil sauces, letting the rice act as a conveyance mechanism for all the dark, drippy fats.

The founders plan on opening additional locations in Midtown and near Columbia, though there’s something fitting about a flagship on Seventh Street near Third Avenue. There’s long been an abundance of East Asian restaurants in the East Village, from Sichuan spots to Korean wing joints to ramen shacks. Still, the steady stream of contemporary Chinese restaurants constitutes an important culinary reality: Young operators from the PRC and Taiwan are using the East Village as a testing ground for introducing Manhattanites to (and reminding expatriates of) the harder-to-find specialties of their respective homelands. I’m thinking of the cold skin noodles of X’ian Famous Foods, the fiery dry pots of Mala Project, the Yunnanese mixian soups of Little Tong, and now, the messy seafood boils of Le Sia.

The significance of these venues can’t be underestimated. As larger restaurant groups throughout the city continue to spawn overpriced French-Italian-American copycats, smaller-scale restaurateurs of Chinese descent are advancing a more exigent cause: They’re ensuring that the East Village, which gave birth to Momofuku, Prune, and other great venues over a decade ago, remains one of the most vital, unique, and diverse places to eat in Manhattan.

Here’s a quick guide on what to order: Start with skewers, though keep in mind they might arrive either before, during, or after the boils. For respite from the spicy shellfish, consider a side of cool mung bean noodles, sauced with the traditional blend of salty (and mild) chiles, or a clean bowl of tomato soup, with little globules of dough and egg floating about.

As for the boils, keep in mind that the crawfish require a lot of work for not a whole lot of nourishment. Shrimp offer a more approachable head-sucking experience, with easier access to a heftier quantity of flesh. Snow crab, in turn, is filled with an abundance of soft, sugary insides — the proper foil for Le Sia’s gently bitter and powerfully aromatic garlic sauce. Best of all is the Dungeness crab, teeming with meat as soft as cotton and packing a deep oceanic tang; it stands alone, but becomes otherworldly when drenched in the incendiary 13 flavors gravy.

The individual sauces, which can be matched with any shellfish, are all offered at four different levels of heat. Spicy, the third hottest, should be tolerable for most diners, while “fire” provides just enough kick to induce a touch of extra beer drinking.

Waiters consistently drop the check before patrons can ask for dessert; that’s just as well, since the only sweets are outsourced green tea, vanilla, or red bean ice cream. And quite frankly, there’s something to be said for giving up one’s table to make room for the throngs waiting up front. Let the people have their xiaolongxia!

Our review of Le Sia 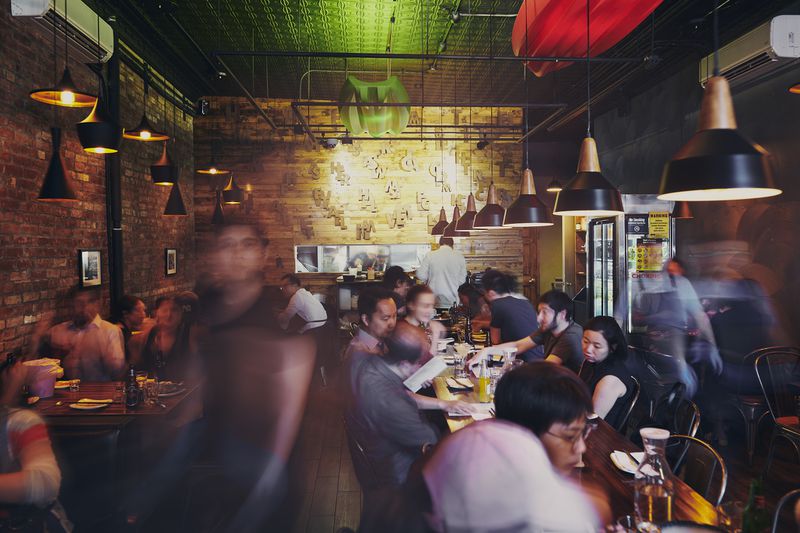 Bonus tip: Crawfish are a seasonal crustacean; Le Sia imports them live from Louisiana from January to July, then switches to California specimens until October, after which they’ll use frozen ones from Spain. Plan your visit accordingly!