Share All sharing options for: Modern Korean Restaurant Soogil Doesn’t Live Up to Its Potential Yet

Review and information for Soogil

Of all the tableside service routines — flambeing, liquid nitrogen dipping, cacio e pepe-ing in a cheese wheel, Dover sole deboning — the one that’s often the most transformative is also the least obtrusive: the a la minute pour. You’ve seen it a thousand times: a waiter takes a carafe and artfully spills it over your plate with the flick of a wrist. Roll your eyes all you want, but there’s a purpose here. It’s about technique — ensuring a steamy broth doesn’t overcook, say, langoustines while they’re en route to the dining room. And it’s about storytelling — watching a monochromatic fish, perhaps black bass, come into focus as its surroundings are drenched in a black truffle puree.

Execution, of course, is half the battle, which brings us to Soogil, an ambitious East Village Korean spot by chef Soogil Lim. A waiter ferries over a pot of steamed tofu flan, a white canvas garnished with pink shrimp, littleneck clams, crosshatched squid, verdant scallions, and crimson chiles. And then it all slowly disappears as the server picks up a tiny kettle and pours an opaque seafood broth; the soup’s ferric hue suggests day turning to dusk.

To be precise, that’s how it all looks in fancy online photos. It was served to me differently. A waiter walked over and dumped in the broth before I had a chance to see what was inside. It was an oversight that turned something visually striking, a collection of kaleidoscopic ingredients a chef put a lot of care into plating, into something pedestrian. It looked like any other bowl of soup.

It’s not the only time service gets in the way of a meal here.

“I wish LA would embrace Modern Korean cuisine like NYC has,” Eater Los Angeles editor and Korean food expert Matthew Kang tweeted last year. Indeed, while Southern California’s largest city is famous for its deep bench of traditional Korean spots, New York is making a name for itself with more contemporary riffs on that country’s fare. There’s Jungsik, with its $225 caviar and wagyu-laced tasting menus; Jeju, a sleek noodle shop slinging some of the city’s most elegant (and fiery) ramyun broths; Oiji, a breathtaking small-plates place that drizzles gochugaru butter over abalone; and Cote, the country’s only Michelin-starred Korean barbecue spot, a venue as famous for its prime galbi as its pink and boozy frosé.

When my friends visit New York, a modern Korean spot, alongside a Jewish deli or a Brooklyn barbecue joint, is increasingly among the first few places I’ll recommend. And while Soogil, which opened four months ago, isn’t quite as consistent as its peers, some of its work-in-progress dishes are delicious enough experiments to merit a meal.

Take that tableside seafood soup again. The broth tasted of chile-laced ocean. The squid, in turn, was tender and almost creamy, while the shrimp were sweet if aggressively overcooked. And the steamed layer of tofu exhibited the softness of a marshmallow but packed an earthiness that conjured up visions of roasted corn. When kitchen and service staff get this dish right, and I’m betting they will, it will be one of the city’s great seafood preparations.

Lim certainly has the pedigree of an overperformer. He spent seven years working at Daniel, one of the city’s most respected French restaurants, before moving on to an executive chef position at Hanjan, a heralded Korean gastropub in the Flatiron district.

At Soogil, he likes to blend those Asian and Gallic sensibilities. Such efforts are not always successful. Every few minutes a loud hiss and sizzle echoes through the room, a cloud of steam rises up over someone’s table, and for a few brief seconds, the entire restaurant smells of caramel. This is the result of a waiter pouring soy over a hot metal plate, the final flourish for a dish of foie gras atop crispy rice. This tableside pomp, alas, is for naught; the kitchen sears the duck liver to a meaty medium rare, but the rice is simply a disc of hot mush, with little of the promised crunch.

Better are the medallions of monkfish, soft and delicate above a spicy layer of lobster sauce. Or consider the elegant slices of mackerel, gently grilled and placed over nigiri-length satchels of Swiss chard-wrapped rice, the grains laced with just enough ssamjang to faintly sting the tongue.

Soogil is a handsome little restaurant, a single room with blonde wood tables, brown plank floors, and exposed brick walls. Dining here can be a profoundly relaxing experience; one can sip on cold kimchi soup, a brilliant foil to warm, stretchy sweet potato beignets, while overlooking the trees of Fourth Street, visible through the open doors. Also visible through the doors, on one night, is a crowd of 10 folks, some of them standing around waiting to be acknowledged by a host.

Dining here can also be stressful. One staffer might forget your drink, while another might take away your jar of rice beer away before it’s finished. If you’re sitting at the counter, servers sometimes talk across you to the bartender, as if they were patrons at a Murray Hill watering hole waiting to get a vodka soda. I watched a frustrated patron struggle to get a check, then flag down another server to retrieve her credit card, which didn’t come back with the bill.

Good food helps some of these mishaps fade into the background; such is the case with a mung-bean pancake. Lim deep-fries the pork fat-laced batter until the exterior has a deep, almost mahogany crunch. The resulting creation, topped with a tart slaw of kimchi, could easily pass for a high-grade chicken croquet in a blind taste test. Then you wait nearly half an hour for a main course, a few blubbery slabs of pork belly; luckily, the accompanying radish kimchi rolls, a wallop of restrained bitterness, stand on their own with aplomb.

Spicy chicken is a solid entrant into the poultry category; the kitchen stews drumsticks with gochugaru and root vegetables until they are chopstick tender and infused with the savory oomph of salted shrimp sauce.

Those looking to sate their beef fix might try the floppy little mops of deftly seared eye round; they sit atop a soft pile of japchae noodles. The soy- and sugar-braised short rib, by contrast, needs work; it’s a slab of gray, sinewy meat, with scant tenderness, beefiness, or sweetness.

Desserts also have a steep hill to climb. There are just two: a fine, forgettable nest of chewy fried dough with honey chestnut gelato, and a leaden passionfruit tart, denser than overchilled supermarket pudding and without any of the fruit’s naturally vibrant acidity.

With a modern Korean scene so competitive, Soogil will need to improve. 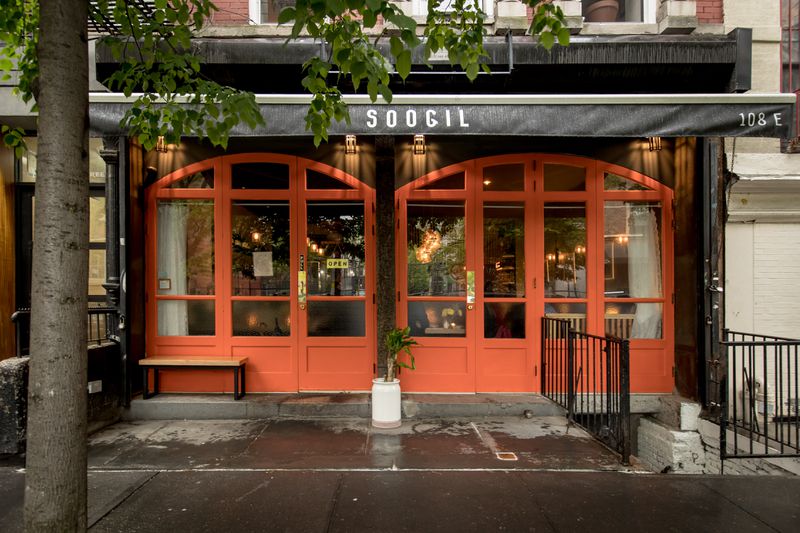 Cost: Pretty affordable! Most shared plates are $16 or under, though the foie gras crispy rice is $23, while the larger short rib is $26.

Bonus tip: Check online reservations before swinging by as a walk-in, because even bar seats, which can be booked in advance, sometimes get snatched up a few days out at the busiest times.