Pheasant in Williamsburg Is a Brighter, Wilder Version of a Neighborhood Bistro

The airy, plant-strewn restaurant from an Isa alum has excitement ingrained in the menu

Share All sharing options for: Pheasant in Williamsburg Is a Brighter, Wilder Version of a Neighborhood Bistro

Review and information for Pheasant

We’re already familiar with the traditional Greek method of preparing octopus, by whacking it against a rock to tenderize it before slowly simmering, resulting in gluey and chewy cephalopod. But Pheasant has found another way. Tentacles are braised for up to two hours and pan-roasted in olive oil, then deposited in a slurry of spicy liquid salami and the concentrated yogurt called labneh, providing a funky and sour contrast to the blandness of the creature, which develops a texture like red licorice laces. The effect of this $16 dish is to make octopus lovers very happy.

Pheasant, opened last November, is a bistro located in an obscure corner of Williamsburg, on Graham Avenue beneath the roar of the BQE. This area remained an immigrant southern Italian neighborhood for the longest time; indeed the premises of the restaurant was formerly Graham Avenue Meats and Deli, a shop with a devoted following for its chicken cutlet hero.

Now, no trace of the deli remains in the airy and informal dining room, the walls suspending mirrors and perforated fixtures that shoot out narrow beams of light, with pottery and potted plants strewn here and there. A white, L-shaped bar dominates the space and makes it a very friendly place to eat. The restaurant is descended from a catering company called Little Pheasant, run by Cat Alexander along with her husband and chef Vincent Fraissange, who was formerly executive chef at Taavo Somer’s experimental Williamsburg restaurant Isa.

Pheasant’s 16-item menu is one of those that doesn’t really distinguish between apps and mains, and some of the former can function as light meals, especially if you’re not too hungry. The bill of fare incorporates diverse and sometimes wild Mediterranean elements into such bistro commonplaces as hanger steak, seasonal vegetables, roast chicken, a twisted burger, quirky salads, and “day boat” halibut.

Take a favorite seasonal vegetable — thick-stalked asparagus — perfect in its freshness and snap. You almost wouldn’t recognize it at Pheasant. The rods have been lightly battered like tempura, flash fried so no limpness results, then scattered on the plate with puffy buttons of potato mousse and cooling slices of ham. Ham? Yes, and not prosciutto, either, but good old American smoked ham like your mom or dad might have put in your sandwich if you grew up in the Midwest. The dish ($11) is summery dining perfection, and might be the best thing on the menu.

Is that menu overly creative? Not for me. I enjoyed the Fez salad; it douses greens and vegetables with a carrot-cumin vinaigrette. I also loved a red endive salad that added pecans and goat cheese to the crunchy lettuce, and swamped them in a sherry vinaigrette that was thicker and more opaque than its name suggests. It’s a dish that disappeared from the menu last week but will be back next year, when the seasons change again.

That dish really just shows that you can’t go wrong picking vegetables as your meal at Pheasant. This is especially true with the single vegetarian entrée ($18) — itself an inviolable trope of neighborhood bistro menus. Here, it is based on boxcars of polenta that have been deep fried, resulting in audible crunch and a supremely corny flavor. You’ll be teasing them out from their forest of ‘shrooms as you sop up the ramp chimichurri with the focaccia ($6) you should have ordered at the commencement of the meal.

As if to balance out the vegetarian entrée, a juicy hamburger is also available, but not just any hamburger. It comes with slices of kielbasa on top, maybe to remind you what lurks on the other side of the BQE. (Answer: Polish Greenpoint). And the burger isn’t the messiest thing on the menu: One upping Buffalo, a plate of chicken wings comes so drenched in scarlet sauce that it will leave fingers, face, and shirtfront comically smeary. Moist wipes are provided.

As with many bistros of this sort, the larger dishes can seem a bit flat compared with the smaller ones. A nicely-browned half chicken comes on a bed of yellow rice with a dipping sauce and side salad. While perfectly satisfying and plenty of food at the price ($21), it doesn’t really light a fire under your tastebuds. Similarly, a large plate of hanger steak cuts plenty of medium rare meat into big cubes, but leaves you wishing the steak had been left intact without the distraction of roasted turnips.

But these are small quibbles on a menu whose excitement is deeply ingrained, one of those where the challenge is not finding something you want to eat, but in eliminating those dishes that don’t sound quite as good as others. Ultimately, my only regret after several visits was that there’s no pheasant on the menu at Pheasant.

Our review of Pheasant 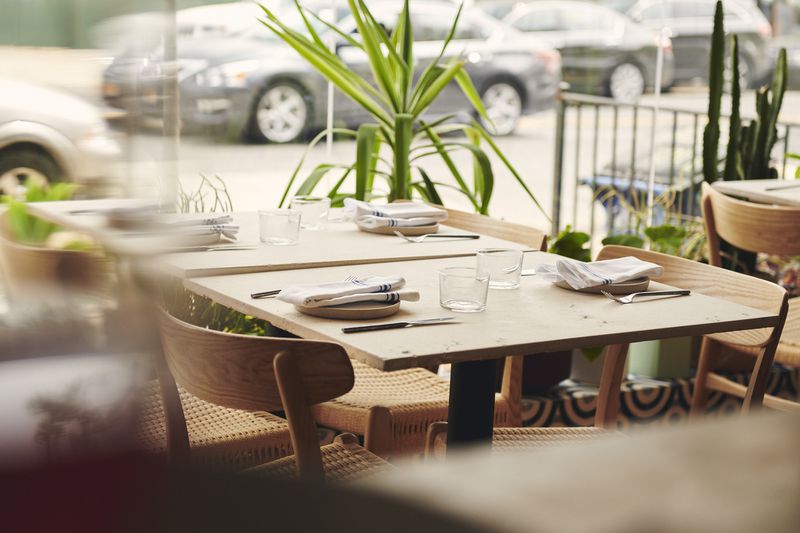 Cost: Dinner for two, including three smaller and one larger dish, and two cocktails or glasses of wine, plus tax but not tip, $90.

What to drink: Beer, wine, and invented cocktails available, the latter strong and thus not a bad deal at $12. The wine list is particularly good for a neighborhood bistro, with a focus on orange wines and fizzy wines, including a lambrusco great for summer drinking, priced at $45.

Bonus tip: The most enjoyable seats are at the bar as the sun sets under the BQE, where you could enjoy a couple of smaller plates and a glass of wine as a delightful and thoroughly seasonal meal.