MeMe’s Gets the Modern Diner Right

Share All sharing options for: MeMe’s Gets the Modern Diner Right

Review and information for KIT

MeMe’s Diner in Prospect Heights was empty at 10 p.m. on a recent Thursday. I walked in, took a seat at the counter, and grinned as a waiter placed a saucer of cheeseballs in front of me. This was not an artisanal product but an industrial one — neon corn puffs enrobed in dehydrated cheddar. Their bright orange hue took on the air of bioluminescence against the Christmas-green bar stools. I ate the puffs in between sips of passion fruit-laced milk punch; when I finished them the waiter asked if I’d like more. This transaction occurred in less time than it typically takes to get $7 bread service at a more upscale establishment. The cheeseballs were free.

There were three staffers in the restaurant that night: the waiter, co-owner Bill Clark, who worked the front of the house, and co-owner Libby Willis, who oversaw the kitchen alone. Willis sent out my coconut-crusted sweet potato atop a pool of salsa verde and mole poblano, the sugary starch acting as a counterpoint to the tart, nutty, fiery sauces. I paired the dish with the restaurant’s signature Manhattan, a cocktail that Clark’s grandmother reportedly drinks every day. It was a big Manhattan.

Amid the quiet room I wondered if I was inside a modern, boozy version of Edward Hopper’s Nighthawks, the 1942 painting that depicted a sparsely populated Greenwich Village diner as a beacon on a dark city street. Then other patrons started showing up, and I was no longer alone, though really, I never was.

The fact that MeMe’s is a newly opened diner — not to mention a queer-owned business with a largely queer and diverse staff — makes it an outlier of sorts, even if the term “diner” is loosely applied. A diner, after all, is supposed to serve lunch and breakfast; MeMe’s does not. And a diner is supposed to be old, which doesn’t say much for the future of the form. A Crain’s article from 2015 suggests the number of these establishments have dropped by nearly 60 percent over the past 25 years. The reasons are similar to why other small-time operators have been closing: The cost of business is going up as rents and labor costs continue to rise.

This reality is even tougher for a diner. Patrons expect longer hours, lower check averages, a patty melt that never changes, and epically lengthy menus, all in a venue where they can sit and read the newspaper for an hour and get free refills. And therein lies the paradox. Everything that allows independent restaurants to adapt to the city’s brutal restaurant economy, from seasonal menu innovations, to performative sourcing (organic this, fair trade that) to never-ending price hikes, goes against the very nature of what a diner is supposed to be: a stable respite from our brutally mutating capitalist world.

Channeling the ethos of a diner, in other words, comes with handcuffs that are both financial and nostalgic. Willis and Clark succeed by playing by some of the rules; there are the lowish prices, the giant dinner portions. And then they bend some of the others, as with their freewheeling approach to comfort fare, which ranges from deliciously dorm room-y (potato chip-crusted mac and cheese with hot sauce) to healthfully voguish (quinoa, millet, and amaranth porridge).

The setting, incidentally, is a 31-seat room boasting a teal-and-brown bar, a letterboard cocktail menu, bucket stools, frosted cake under a glass cloche, and tan leather benches. MeMe’s isn’t so much a utilitarian cafeteria as it is a rosy-eyed reanimation of a midcentury lunch counter. I can’t think of another restaurant with a Shirley Temple on the beverage list.

This is precisely the place to order a patty melt. The burger, smashed between two slices of griddled marble rye, packs a deep maillard char, and drips with American cheese and Russian dressing. On the side is a pile of potatoes as crispy and heady as anything out of a Michelin-starred French brasserie. This costs just $17.

Affordability is key. One can enjoy a giant egg sandwich, stacked with cheese and greens, for just eight bucks. A more composed brunch or dinner, with a beer, tax, and tip, will run about $30. To be fair, those aren’t price levels that one might deem “diner cheap.” And accessibility isn’t the term that comes to mind when one hears of 90-minute waits during peak brunch.

Related: Brunch is excellent. On a Sunday afternoon the restaurant was filled with people wearing dresses, graphic T-shirts, babies, hijabs, designer trucker caps, and statement necklaces. There are no free cheeseballs at brunch. There are free bowls of dry cereal instead, a mix of Lucky Charms, Froot Loops, Trix, and Golden Grahams. The cereal contains no milk or kitschy refinement, though it’s hard not to overlook the fact that the bespoke selection appears to have been coordinated with the restaurant’s own faded color scheme. The wait staff is happy to bring seconds.

Willis and Clark base their approach to American comfort fare on a mix of “international pantry staples” (chile oil, fish sauce), “farmer’s market greens,” and “bodega standards,” to use their words. The cereal clearly belongs in the bodega camp. So do the migas — soft-scrambled eggs with cilantro served in a bag of Fritos. As the chipotle cream and green salsa absorbs into the corn chips, they soften into a glorious, fork pierce-able mush. Pair this with a few slices of Maldon-flecked cinnamon toast.

Just as stunning — and photogenic — are the fried eggs, served sunny side up on a bed of wilted kale. Willis surrounds them with a tidy moat of chile oil, the shallow pool filled with pepitas, sunflower seed, and poppy seeds. The flavor is gentle at first, complexly nutty, crunchy, and smoldering. And then pepper-laced greens assault the palate with a stinging uppercut of heat.

In the evenings, the right way to kick off a meal is with the fried giardiniera, a fritto misto improved by the acidic tang of pickled carrots, cauliflower, and banana peppers. Griddled meatballs, in turn, are doused in an intoxicating char siu-style mix of cinnamon, garlic, and hoisin. You retrieve them out of a ceramic crock with wooden toothpicks.

For mains, consider the patty melt or sweet potato. The suburban mall-style Buffalo chicken salad is everything it claims to be, a bed of blue cheese-studded lettuce below a pile of crispy hot sauce-slicked fowl. The cordon bleu, in turn, is a study in satiating caloric expectations; it’s a thick slab of pan-fried breast meat in a robe of salty ham and Gruyere.

Those who drop by a touch earlier or later will find patrons using MeMe’s like they would a traditional diner, which is to say at a more leisurely pace, with no waits at all. I watched as one guest sat and sketched in a notebook before sunset. Another couple came in for dessert just before 11 p.m. Their reward was a slice of Vietnamese iced coffee cake, simultaneously sweet, bitter, and fluffy.

Servers present each check with a mint-chocolate Andes Candy. They say thank you, and that’s it. They don’t say “Thanks guys” or “Come back again, ladies.” It’s part of the gender-neutral ethos; common phrases like “yes sir” or “yes ma’am,” whose incorrect usage can ruin someone’s meal, are never uttered here.

It’s no small matter that these policies are being implemented at a venue that serves as a proverbial third place between work and home. In an era when incidents at coffee chains, breakfast chains, late-night bars, and bakeries are making more Americans question whether so-called everyday spaces are truly welcome to all, and in an era when queer spaces in the hospitality industry are gradually vanishing, society could use more places like MeMe’s — places where inclusivity and diversity aren’t a reactionary PR scheme, but rather part of the institution’s DNA.

The fact that it serves one of the city’s best brunches doesn’t hurt either; the opening of the back garden in warmer weather should help with the waits just a touch. And even though MeMe’s is a chic diner where the coffee costs $4, refills are still free.

Our review of KIT 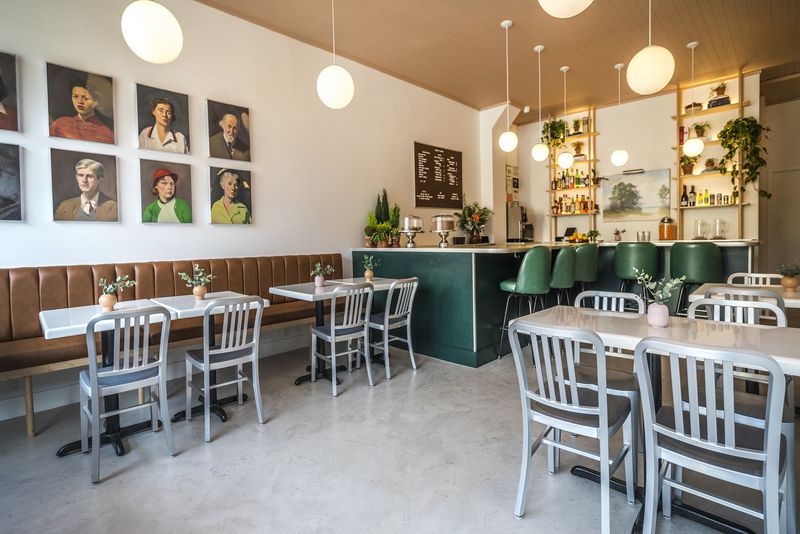 Bonus tip: If the wait is long, consider a drink or two at the Bearded Lady, an excellent Tiki-themed bar across the street.