Share All sharing options for: Her Name Is Han Is NYC’s Cutting Edge of Korean Soul Food

Review and information for Her Name is Han

The art project of a menu at Her Name is Han, at 28 pages, runs longer than most wine lists. The binder-bound tome opens to photos of of soju bathed in soft light. Pink grapefruit segments and candied cherry blossoms bob in the distilled spirit, a harbinger of the boozy night that will ensue. On another page, a shrimp and hot-pepper pancake is shot from overhead, an angle that flattens the jeon’s intensely briny and spicy nooks and crannies, almost giving it the illusion of being stenciled on its blue-and-white plate.

All of the pages are matte, printed on heavy, high-quality paper, with the dishes and descriptions scattered about in a loose, magazine-style layout. Some items receive museum style-captions; there are short history lessons on the origins of gochugaru spice paste and army stews. Fanned-out slices of pig belly are advertised in all-caps fonts that would be fit for a wartime billboard. “HAN’S PORK WILL FATTEN YOUR SOUL!”

None of this feels like a standard bill of fare as much as a gift guide from a high-end retailer. Owner Kihyun Lee, who studied at the Fashion Institute of Technology, is leveraging the power of print and design to transform the restaurant’s rustic Korean dishes into objects of edible desire.

Or put more practically, the menu’s clever photography acts as an unspoken guide to why certain dishes are so spectacular. Consider the bulgogi. The camera gets in close on the minced short-rib patty, the surface glistening with moisture, the craggy edges burnished from the grill. I daydreamed about the gorgeous char before it arrived — and when it did, on a scorching cast-iron pan, the bulgogi turned out to be perfectly seared, crunchy, and packed with notes of sugar, sesame, and soy. When I close my eyes and picture it, what I see first is the photo.

As certain stretches of the city continue to suffer from strains of gastronomic ennui (“oh boy, another New American hotel restaurant”), the ascendency of modern Korean fare has become one of the more energizing trends in New York, from the tasting-menu-only Jungsik to the experimental small plates of Oiji to the ramyun wonders of Jeju to the bovine barbecue bombshell that is Cote. Lee himself helped fuel this zeitgeist with Take 31, which hawks Havana-style corn cakes, radish kimchi jambalaya, and banana-flavored rice beer (his hospitality company, HAND, also collaborates with the sleek Korean Atoboy).

The more classical Han doesn’t so much represent a refutation of this trend as a stylish counterpoint to it. The nearly three-year-old venue, next door to Take 31, elicits most of its thrills via more traditional means: homestyle shared plates, stews, and one of the city’s better fried chickens. This is all contrasted, gently, by that Ethan Allen catalogue of a menu, as well as the the requisite brick walls, neon signage, exposed filament light bulbs, antlers, and bric-a-brac on bookshelves.

Then again, it is unlikely that notions of modernity, tradition, the color of the walls, or even the name of your dining companions will register as important data points when the fiery blue crab is wreaking havoc on your face, your tongue, your mucous membranes. Chef NamHyung Woo cuts up raw crab and douses it in enough garnet spice paste to make the crustacean look like a drippy Christmas ornament. The best way to eat the staple dish, called yangnyeom gejang, is however the heck you can, but this critic advises slurping the grey, slippery meat out of the shell and enjoying the gentle brininess before the full heat assault takes over (tamer types can scoop out the meat with a spoon).

Pair the crab with cooling tofu. Han drenches the bean curd in so much black sesame seed sauce that it takes on the look of vanilla bean-speckled gelato. On top of this largesse goes a fistful of crisply battered onions. The flavors are simple and accessible: soft tofu, nutty milk, salty fried allium. On its own, it’s a solid-sized snack (or a light meal) for $9.

Every dinner, of course, is accompanied by the traditional banchan, ramekin-sized side dishes that change on a daily basis, from cabbage kimchi to salted asparagus, umami-rich tangles of dried seaweed, and chewy little piles of dried, chile-flecked squid.

Han’s menu bills its offerings as “Korean soul food,” stating that the venue is geared toward the “growing number of Korean Americans and Korean internationals working and studying in the city.”

Indeed, the greater metropolitan area is home to the country’s second-largest community of Korean Americans in the country after Los Angeles. And while many of the more modern spots are dispersed throughout Tribeca, the East Village, Flatiron, and elsewhere, Lee keeps his small empire closer to Manhattan’s Koreatown on 32nd street, where venues are often open 24 hours to cope with sky-high rents.

Han closes at 11:15 p.m. on weekends, which is a bit of a letdown for those craving its superb fried chicken. It might not reach the level of perfection of, say, Turntable Jazz (one of the city’s best, open until midnight on the weekends), but it beats out virtually any recent entry this critic can think of. The bird lacks any of the garlic or chile sauces so frequently associated with Korean-style fries. It’s just plain fried chicken that’s sufficiently juicy, crispy, and brined, with a touch of sweetness, and a wallop of concentrated poultry flavor. The kitchen cuts it into knobs that can be picked up with chopsticks; the meat is best when sprinkled with a touch of salt and dipped into sweet-and-sour sauce.

The menu says that its rice cakes are laced with yuzu, but I couldn’t detect any of the fragrant citrus. They taste like any good rice cake: soft, glutinous, and slathered in chile sauce. Also consider the steamed dumplings, filled with pork and cabbage, as well as the stretchy potato noodles, infused with soy and topped with sweet head-on shrimp.

Bo ssam, boiled pork belly with spicy kimchi, won’t win any converts with its middle-of-the-road preparation; others will find comfort in the soft textures and bland flavors of the pork.

Budae jjigae, which literally boils from the heat of a tableside flame, is a stunning rendition of the post-Korean War stew, blending American ingredients like Spam, canned beans, hot dogs, and processed yellow cheese (which fully dissolves within seconds) with rice cakes and kimchi-infused beef broth. It’s a study in succulent, umami-rich nitrites that will require the user to consume as much water as beer.

The desserts boast a more contemporary bent. The kitchen places two scoops of black sesame ice cream over a green tea crumble and garnishes the affair with tart dried strawberries; the primary-color contrasts are striking — the dish looks like it was pulled out a cartoon sundae shop.

Even better is the deconstructed banana split: a bruleed sweet plantain, served alongside a scoop of vanilla ice cream and a spicy pool of caramel ginger. The dessert (and its plating) is decidedly modern, even if the rest of Han is old-school, which, quite frankly, is a good balance for a restaurant — and occasionally, a city — to have.

Our review of Her Name is Han 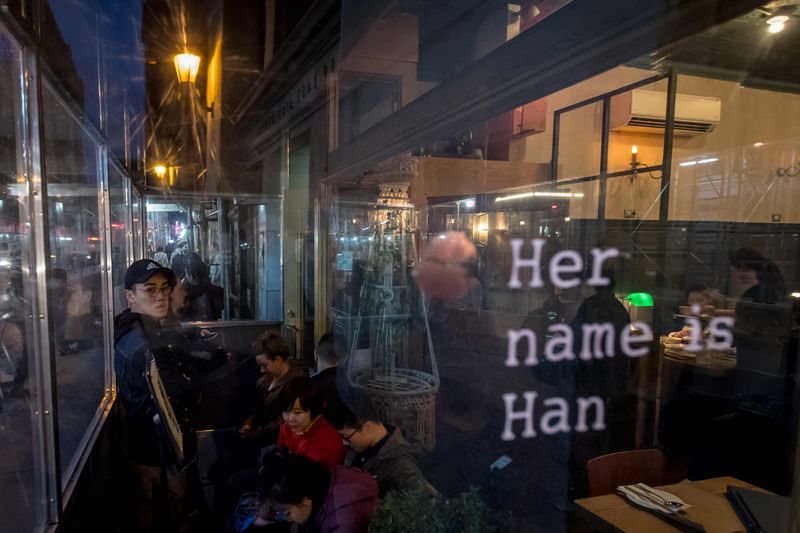 Bonus tip: Do not sleep on the excellent house-infused sochu, especially the not-too-sweet grapefruit variety!

Her Name is Han