Momofuku Ko, the two-Michelin-starred jewel of David Chang’s empire, has always peppered its tastings with high-wire whimsy, from teetering trout roe mille-feuilles to basil-seed lily ponds to shavings of frozen foie gras that melt like snowflakes. And yet in 2018, the restaurant’s most Matrix-like mind-bender of a dish is somehow the humble chicken drumstick.

The chicken is fried four times, at rigorous two-minute intervals, in a slurry of cornstarch, flour, vodka, and beer. It is re-battered in between each fry, and finished with a brushing of mirin, yuzu, and green Tabasco. What the chef places in front of you, on a gray ceramic plate, isn’t so much a normal drumstick as it is a puffy, golden, Yogi-Bear-picnic-basket fantasy of what a chicken wing should look like.

The drumstick is cold. This is by design. Generations of humans have enjoyed chilled fried chicken in more familiar environs — one thinks of a Sunday picnic in a grassy park — but it’s hard to think of a refrigerator bird with this much crunch. The firm skin shatters like a Butterfinger bar, while the sweet-spicy-citrusy glaze, an American take on yuzu kosho, counteracts all the salty fats of the meat.

Normally, the price of a meal at Ko is $255, reservations only. The quadruple-fried wing, however, is only available in Ko’s new a la carte bar room, where it sells for just $7, walk-ins only.

Ten years ago, as the U.S. economy slipped into its longest downward spiral since World War II, Chang opened the original Ko on First Avenue. With an $85 menu, it felt like a permanent recession special of a restaurant — at least by fancypants standards. The chef, barely 30, was already a legend for redefining ambitious American cuisine as affordable, Asian-accented small plates at his nearby Ssäm Bar.

But Ko’s nose-thumbing at the haute establishment was even bolder. Everything about the place was (classically) wrong: the cramped counter seating, the expletive-spewing chefs, the alt-rock soundtrack, the fried McDonald’s-style apple pies, the online-only reservations. It felt as if the Ko revolution would democratize fine dining forever.

It would not. In fact, there’s never been a worse time in the past decade to seek out accessible luxury than now.

New York is still one of the U.S.’s culinary capitals, but the Changian notion of democratized fine dining has proved illusory. Once-approachable tasting joints (Aska, Brooklyn Fare, Atera) have skyrocketed into the upper stratosphere of prices. Major Food Group pivoted from $50 set menus at Torrisi Italian Specialties (RIP) to power spots so expensive they don’t even publish the prices online. And what’s replacing those more reasonable-ish venues? Nothing, really; dinner at any one of the city’s dozen or so new omakase joints will easily run $350-plus per person.

Momofuku Ko, in turn, relocated to a larger space off the Bowery, adopted more refined dishes (RIP fried apple pies), and eventually started charging roughly $1,000 for a wine-paired dinner for two. I awarded it four stars in 2015; it’s without question one of the city’s great restaurants. But in this rich person’s playland that is contemporary New York, Ko’s evolution meant that cash-strapped gourmands had lost a sanctuary.

Ko’s bar room, which opened in February, marks the return of that sanctuary.

There are 15 table seats, a small island for stand-up cocktailing, hefty soundproofing, and the centerpiece, a blonde eight-seat bar. You’ll want to sit at that bar, as it overlooks the new test kitchen, where chef Sean Gray and others glaze duck pies with painter’s brushes and grill crepes over the binchotan.

The crepe ($8) is made from from the same sourdough starter that fuels the bread service in the main room. Here, it imparts the savory pastry with such a remarkable tang it recalls the acidity of injera. The grilling gives it a distinct sweetness and a chew not dissimilar to a fruit roll-up, while a brushing of aged butter adds a marked cheesy funk. There is no other bread course in the city like it.

It’s also hard to think of a New York dish comparable to the tandoori firefly squid. Cooks sear the torpedo-shaped creatures — they look like miniaturized beasts from a Guillermo del Toro flick — in a blend of coriander, paprika, garlic, onions, and soy. They exhibit a handsome bronze hue and pack the flavors of smoke and brine — with a bit of squishiness thanks to their oceanic guts. Equally stunning is the chaud-froid of shrimp. Gray rips the shells off of raw spot prawns, dredges the slithery bodies through a sambal-spiked gelee, then tops them off with the fried head, a warm, crunchy counterpoint to all the cool crustacean creaminess.

Pinning down precisely what strain of global eclecticism a Momofuku restaurant specializes in is a particular type of modern trivia question. At the moment, chef Gray’s food is modern American-French-Japanese with nods to South and Southeast Asia, all served in a style that’s more refined and a touch more expensive than Ssäm Bar. Most dishes on the 16-item menu, written in hand in a cute little notebook, are under $35. That’s not a bad price for what’s nearly a four-star meal.

The team at Ko built the bar room to “create a space for tasting-menu research and development,” per its website. That’s a heck of a mission statement; fine dining empires typically begin their innovations in more upscale environs, only later letting them trickle down to the masses. Grant Achatz’s famous black-truffle explosion, now available for $18 in the Time Warner Center, started as a bite at the $500-per-person Alinea. And Wolfgang Puck’s smoked-salmon pizza, not an uncommon sight at his airport kiosks, started its lifespan at his once uber-exclusive Spago.

So in a world where culinary experimentation can command caviar-like markups, it’s refreshing to know that the cheaper half of Ko is inspiring the more expensive half. That’s all the more appropriate for a restaurant group like Momofuku, which started slinging ramen before it launched a tasting-menu venue, rather than the other way around.

One night at Ko’s bar, halibut arrived in a dashi with soybeans. Garnishing the fillet was a confit of the fish’s own skin and cheeks, cooked down with pepperoncini and sumac. The chewy bits were mahogany in color and packed the smoky, umami richness of reconstituted bonito flakes. A few nights later the same fish came as a round cake, laced with verdant chiles and slathered in a cauliflower porridge that somehow tasted like daikon.

Gray says he might adapt both dishes for the tasting — perhaps serving the cake next to the dashi alone, with the confit as a condiment. This is what makes the bar at Ko so damn fascinating: It gives diners a peek into the restaurant’s works in progress, near-blockbusters, and potential failures, without pledging one’s rent check to the full menu.

And then there are the more straightforward dishes: an endive and frisee salad as boring as any other, a competent blend of foie gras and duck in puff pastry ($45), and a charcoal-grilled strip loin ($34) packing as much dry-aged tang as steakhouse versions costing twice as much.

Guests of the main dining room, for now, will miss out on some distinctly thrilling bar fare, like the mandarin tart tatin, with shavings of sharp cheddar that counteract the bitter oranges, as well as the Naked Pruner cheesecake, an egg white-heightened loaf that melts on the tongue like the venue’s famous foie gras.

The bar might not be the four-star side of Ko — service can be a touch uneven here — but the fact that the walk-in half of the restaurant is the more exciting half suggests that Chang and Gray remain committed to Momofuku’s iconoclastic, accessible roots. Rock on.

Our review of Momofuku Ko Bar 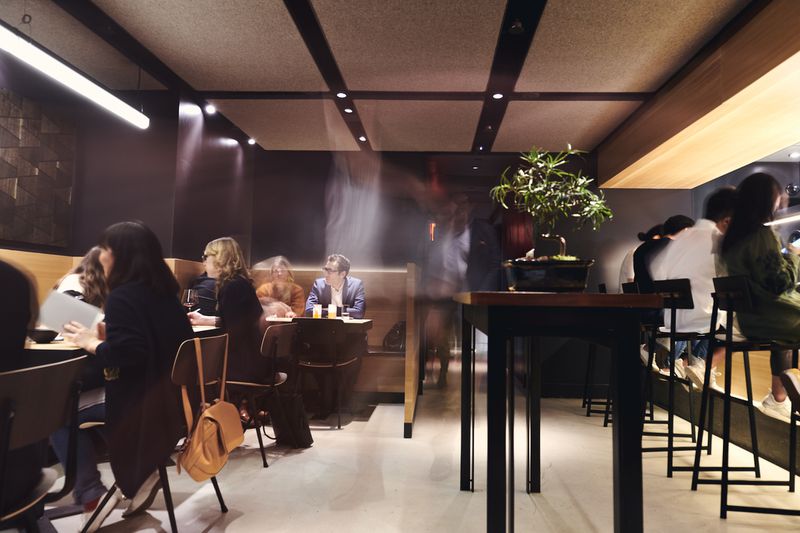 Bonus tip: The bar opens at 3 p.m., if you’re looking for a late lunch! Also note that the cocktail bar in the formal dining room has been removed; the shorter prix-fixe bar menu has been eliminated as well.