L’Atelier Is the Bland Luxury Handbag of Fancy Restaurants

Share All sharing options for: L’Atelier Is the Bland Luxury Handbag of Fancy Restaurants

Equinox has coolers filled with eucalyptus towels. SoulCycle has its grapefruit-scented candles. NetJets private aircraft have their exclusive Cajun snack mix. Every luxe empire has a signature amenity, something patrons enjoy for a few seconds and then forget about. At L’Atelier de Joël Robuchon, one of the world’s most expensive restaurant chains, that amenity is mashed potatoes. Guests at the new Manhattan outpost receive a small, rich pot of pommes puree during the final savory course. Fan-like indentations decorate the top layer, a deft act of latte art for potatoes.

The freebie seems generous in an age when a side of steakhouse potatoes can command a steep price, but keep in mind the cheapest steak here is a 6-ounce American cut that costs $95, service included.

Waiters announce two things upon presenting the pommes. First, they identify the product as “Joël Robuchon’s” potatoes, in case anyone suspects that the “chef of the century” outsourced the recipe for a mere side dish. Second, they claim that the potatoes themselves are “famous.” This is true. In 1980s Paris, the indulgent spuds helped Robuchon make a name for himself at his now-closed Jamin. The impossible ratio of butter to fingerlings, as well the fact that Robuchon was serving such a humble dish at an ambitious venue, epitomized the chef’s efforts to counter France’s lighter, brighter, yet somewhat affected nouvelle cuisine.

The dish does not live up to its legendary status, at least not here in New York. Vigorous whisking imparts the potatoes with the texture of silk, but the dairy fats, which cool quickly, stiffen up to the density of a leaden paste. The potatoes do not taste of the earthy starch any more than they taste of good butter. They almost taste of nothing. And so through the power of manipulation, such an integral part of fine dining, Robuchon’s cooks have taken two of the world’s great ingredients and turned them into haute Crisco.

Once upon a time, before the Robuchon Incorporated assembly line manufactured foie gras-stuffed quail at a dozen spin-offs across the world, L’Atelier was a relevant New York restaurant.

The original Manhattan location opened in 2006, a few years after Robuchon shook some of the stodginess out of Parisian fine dining with Japanese-style counter service and Spanish-style small plates. The Big Apple L’Atelier was a key player in our city’s own culinary tie loosening; the chef’s tapas-focused menu ensured well-heeled walk-ins could dispense with large sums of cash on visually stunning small plates almost as quickly as on a pair of Manolos. It closed in 2012.

Nearly half a decade later, L’Atelier is back, this time in a cool corner of West Chelsea. It is not a relevant New York restaurant. As countless small plates places put out ambitious fare that’s not just creative but rationally priced as well, L’Atelier has devolved into a mediocre bacchanalia for the rich.

It feels like 2006 all over again. The Champagne-by-the-glass list is Veuve Clicquot-only. The color scheme is classic L’Atelier: jet-black stools contrasted against crimson leather cushions and a shiny rosewood counter. The room is decorated with green apples in glass bowls, chile peppers in jars, and dried spaghetti in black vases, a design ethos that recalls the Getty Images stock food photography archive. The soundtrack is international hotel lobby bossa nova.

The menu highlights dishes that could’ve been copied or adapted from Robuchon outposts in Taipei, Singapore, London, or quite frankly anywhere. A handful of black truffle shavings are paired with a salad of cold artichokes and foie gras ($75); the muted, obvious flavors feel ripped from the first-class cabin menu of a 1985 transatlantic flight to London. Wagyu beef, in turn, is subjected to the clubstaurant slider treatment of the aughts, two tiny, underseasoned, overcooked burgers (topped with foie gras) for $44.

The kitchen slathers steak tartare with so much mustard and Worcestershire that it imparts the tartare with the mouthfeel of a chunky pudding, drowning out the fattiness and flavors of the meat itself. This appetizer is nearly double the price of better versions at Estela or Wildair.

Questions of relevance aside, what’s frightening is how representative L’Atelier actually is of contemporary New York. It symbolizes a city overrun by an affluent corporate monoculture, from boutique spin classes that charge thousands for yearly memberships to fast-casual salad chains that don’t take cash to sushi chains where a $200 starting price almost seems like a break.

L’Atelier, whose prices feel rooted in an effort to exclude, attracts a wealthy class of New Yorkers willing to pay stupid sums of money for brand-name luxuries. On any given night the 34-seat counter appears just as crowded as the one at Ssäm Bar. Patrons occasionally show up in red carpet-style blowouts, perfectly tailored suits, and backless dresses. “This goes great on granola and yogurt in the morning,” a Russian speaker next to me says of the 1983 Chateau D’Yquem she’s drinking, a heck of a breakfast condiment at $1,150 by the bottle. Her companion orders a shot of Macallan M whisky, which runs $750. I’m sure it was great.

L’Atelier’s menu isn’t so much an exercise in creativity as it is an exhausting effort in repackaging the same preparations over and over, in different sizes, in different menu formats, and at different prices. The $325 tasting, which this critic did not order, is mostly a listicle-like aggregation of dishes from the a la carte offerings.

Here’s a bit of advice: Order the beet and apple tartare, tangy cubes of the fruit topped with a pungent green mustard ice cream. Or try the aubergine, confit cylinders of eggplant, as soft as gelatin, over dots of light, bright vegetable curry. Just as remarkable is the bass, steamed to a perfect flakiness and scented with a light foam of lemongrass. Le Bernardin would be lucky to serve such a masterpiece.

And virtually any bread by boulangere Tetsuya Yamaguchi is stunning, from the Comté-pocked bread boats (like mini Georgian khachapuri) to the simple, flaky escargot rolls.

Meanwhile, skip the sweetbreads. The kitchen served them with the sinewy connective tissue still attached, making them difficult to cut even with a steak knife. The thymus glands were undercooked to such a degree that they jiggled like Jell-O. Some bites packed a bilious tang that recalled beef cartilage that had turned.

A little bowl of chestnut soup with little knobs of foie gras is fine, but surely suffers from the city’s most expensive soup per slurp ratio at $42. A snack-sized portion of saffron risotto, with little saffron flavor or any type of compelling fat to soften the grit of the undercooked rice, runs $38. A green curry sauce is brilliantly aromatic; the three scallops that sit in it recall the flavor of styrofoam.

There is an acceptable duck main at $36 — if acceptable to you means a single slice of canard with less profound aging, delicate fats, or crispy skin as at The Pool or, quite frankly, most any other competent restaurant in the city.

It’s tempting to recommend L’Atelier as a dessert-only venue, because virtually all of the sweets are fantastic — just keep in mind that a humble tasting of three will pump up your bill by nearly $100. The only skippable dessert is the “chocolate sensation” — an Oreo crumble-coated scoop of white chocolate cream, with a touch of mousse, that constitutes the most expensive riff on cookies and cream in the universe ($28).

That dish, like others, is available at L’Ateliers across the globe. The fact that Robuchon has remained the world’s most Michelin-starred chef for the better part of a decade by essentially opening up the same restaurants over and over again is more critical of the French culinary guide than it is of him.

And the fact that humans flock to this duty-free lounge in Chelsea — and order clubby wagyu sliders at such a clip one expects a model-DJ to drop the bass halfway through dinner — says more about the mall-ification of New York, and the demand for luxuries as obvious as a Gucci clutch, than the predictable output of a chain restaurant. 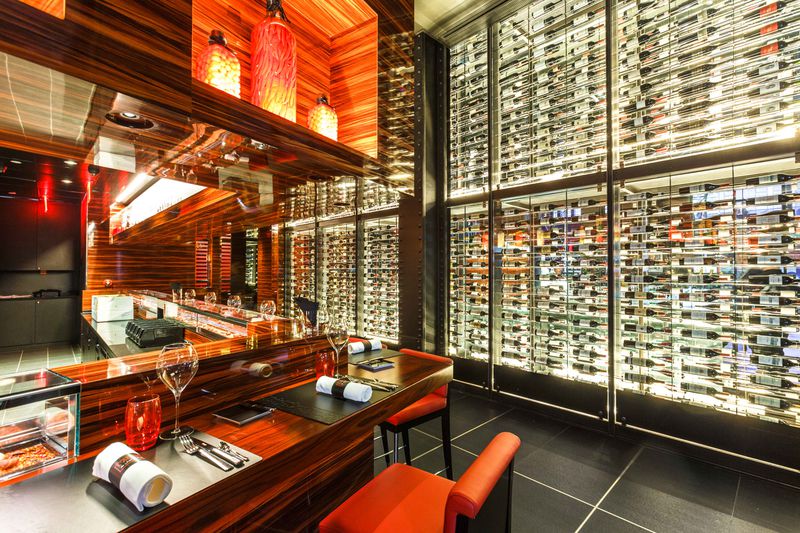 Which Pastrami Sandwich Is Better: Langer’s or Katz’s?