With its bountiful steam table, the Richmond Hill restaurant excels at a variety of West Indian treats

Share All sharing options for: Curry and Roti Destination Singh’s Lights Up Queens

There’s no better vegetarian snack in the world than doubles. Both singular and plural, “doubles” designates a pair of pliable, puffy bara (small flatbreads) loosely sandwiched around a pungent chickpea curry. The doubles is further flavored, at your request, with tamarind and scotch bonnet sauces — but ask for the latter sparingly, since it’s among the world’s hottest chiles.

The doubles are particularly spectacular at Singh’s Roti Shop & Bar, a restaurant in Richmond Hill, Queens. They’re priced at only $1 apiece, and two make a nice light meal. But they are only one of many culinary wonders to be found there.

Singh’s is located on Liberty Avenue, the bustling commercial center of the neighborhood where there are two dozen eating establishments, including roti shops, Caribbean-Chinese restaurants, Punjabi kebab grills, and bakery snack bars. Greengrocers displaying unusual fruits and vegetables like bitter melon and eddoes (a starchy tuber), sari shops and jewelers, and sellers of Hindu, Muslim, and Christian artifacts also pack the street, and a temple sends its undulant spire skyward, while a white marble mosque is under construction.

The area is called Little Guyana, though the owner of Singh’s — who only goes by Mr. Singh — came to the U.S. from Trinidad and intended the restaurant to appeal to people from all West Indian countries. Founded in 1990 and opened here in 1999, the inside looks like a disco and feels like a clubhouse for the neighborhood. A blue neon light runs around the room just under the ceiling, a mirror ball hangs in the middle, and sometimes, just inside the front door a DJ sits, spinning calypso, reggae, soca, and cumbia, with stacks of CDs for sale. On the left separated by a low wall see a glittering full bar, one of the few in the neighborhood.

A whale of a counter displays pastries and savory meals at the end of the room, with four or five attendants standing behind it. On weekends, a line extends to the front door waiting for carryout. The attendants use an unusual system for putting your order together, each one functioning as both cook and counterperson. Each attendant takes a single customer at a time, then zigzags along the counter grabbing pastries, scooping and slicing cutters, stuffing and folding rotis, assembling doubles and bakes, occasionally darting into the kitchen to prepare a dish.

Want a snack to go with a beer or tropical soda? Pick a cutter ($7 to $9), which might be described as an Indo-Caribbean tapa. It might be a small plate of roast pork, garlicky with crisp skin; fried shrimp wontons; Buffalo chicken wings; or length of black pudding, a thick blood sausage that originated in England.

Breakfast or lunch might be “bakes,” sandwiches of smoked herring, egg, curried mango, or fried shark, paradoxically made with dough that’s often deep fried rather than baked. Other meals include lo mein and fried rice — available vegetarian, or with shrimp or chicken. Akin to fried rice, but more Indian in outlook, is a chicken pelau. Speaking of chicken, your options are manifold: jerk chicken, fried chicken, and chicken coated with sweet barbecue sauce.

But the heart of the menu remains the roti. While in India the word refers to a flatbread, it commonly takes on a different meaning in West Indian countries, where indentured servants were brought from east India to cut sugar cane in Guyana, Trinidad, and Jamaica starting in the 1800s. They needed a carry-able lunch to take into the fields, and the humble roti was turned into one of the world’s earliest wraps by folding it around a filling of goat, chicken, seafood, potatoes, chickpeas, or other vegetables, further seasoned with tamarind and pepper sauces.

At Singh’s Roti Shop, a bewildering range of filling choices is available for the roti ($4 to $10), running from the common goat, chicken, and oxtail, to the less common salt cod, tripe, and duck. (The tough duck comes in a dark gravy and doesn’t taste much like duck, but the other fillings are commendable.) The goat is particularly good here, though you have to eat your way around the bones. Indeed, eating judiciously is one feature of the roti that will possibly annoy those who embrace Chicken McNuggets and the concept of effortless eating.

Make sure you have a dollop of potato and chickpea curry added to your roti, whatever the main ingredient. Also consider having a vegetable like pumpkin or spinach tossed in, making the field hand’s meal a wonderland of flavors and nutrition. Speaking of nutrition, the wrap-type roti is made with a flatbread known as dhal puri or roti skin, which has crushed yellow split peas between its layers, which adds to the fun.

Without going to too-great length, let me also mention a form of roti more suited to communal dining. Called a “buss up shut” (dialect for “busted-up shirt,” referring to its tattered appearance), this roti features a giant flaky flatbread served on the side, so you can break off pieces and pick up bites. A similar arrangement pertains with the $5 breakfast roti, wherein the flatbread is matched with a single serving of vegetable such as eggplant (bigan), string bean, or fried potato (aloo). Whichever type you choose, you can’t go wrong with a roti.

Pastries are a whole other game of cricket. Suffice to say some are of English and others of Indian ancestry, as evidenced by names like “fudge” and “jalebi.” Anyway, when it comes to pastries, you’re better off at Sybil’s Bakery, across the street.

Our review of Singh's Roti Shop 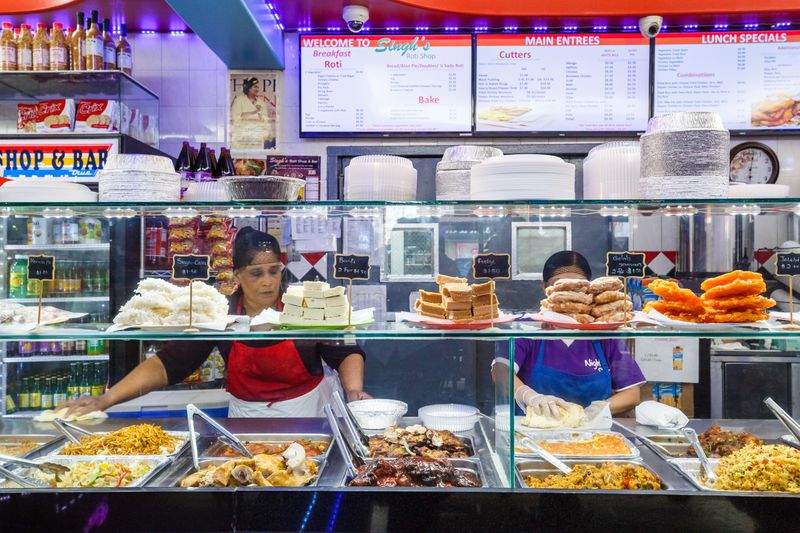 Cost: Dinner for two, including one buss up shot, two doubles, a cutter, and two bottles of tropical soda, including tax, $22

What to drink: Tropical sodas made in Guyana and Trinidad are available, in flavors like ginger beer, mango, pineapple, and kola. Beer also available

Bonus tip: If you’ve never had a roti before, pick boneless chicken with potato-and-chickpea curry and one spoonful of “pepper” included. Ask the attendant to add a dash of pumpkin, too, for extra flavor and sweetness.