Share All sharing options for: Taiwanese-American Win Son Delivers One of NYC’s Most Thrilling Meals

Review and information for Win Son

One of the most important things to know about Win Son, a thrilling Taiwanese-American hotspot in Brooklyn, is that the “nutritious sandwich” is actually a doughnut sandwich.

The kitchen tops the patty with pickled pineapple. The result is a masterful creation whose marked sugars, fruity acidity, and squishy bread lean toward the pastry world, but whose oceanic aromas keep it planted in the savory world. All it needs is a spoon of chile oil (on every table) and a cooling chiña colada cocktail, a verdant mix of rum, cilantro, basil, and coconut. The creamy drink cleanses the palate of any lingering salts — and amps up the sweetness just one or two more notches.

Win Son is where you should be eating now. The Kickstarter-funded restaurant opened in May 2016, thanks to the efforts of Josh Ku, a former property manager from Queens, and Trigg Brown, a chef who worked at Upland and Craft. The duo met at a barbecue in Bed-Stuy; bonded over Taiwan’s creative, protean food culture; traveled to Tainan City for research; and eventually settled on the corner of Montrose and Graham.

The basic rectangle of a space was, and still is, bare bones: creaky wood floors, exposed brick walls, black chairs, blonde wood tables, and a concrete bar. The soundtrack is hip-hop. The only kitsch is a trio of recycled soda-bottle chandeliers that gently glow red; the only artwork is a mural of folks eating at a communal table, a modern penal device that Win Son thankfully lacks.

Win Son is just an unassuming neighborhood spot that happens to serve some of the city’s most ambitious Taiwanese fare.

Table waits can easily hit two hours, the product of a booking system that only takes reservations for five or more. The smart move is to snag a few seats at the bar and order an omelet. Soft eggs are folded around mild Beausoleil oysters and a thick layer of sweet-potato starch, a traditional addition that adds stretchiness the way packaged shredded cheese would in an American diner omelet. The correct match for all the muted, silky flavors is the Breakfast of Champions, a restrained blend of rum, peanut milk, black sesame, and toasted coconut shavings. It is a cocktail, yes, but it also recalls the globally popular milk teas (sometimes studded with tapioca balls) for which Taiwan is famous.

Any cuisine in a globalizing world can be difficult to define; what makes the food of Taiwan so fascinatingly complex is that the island nation has seen its diverse gastronomy fueled by a long history of immigration. It derives many of its influences from China’s neighboring Fujian and Guangzhou provinces, but it also incorporates foods from the Japanese occupation in the 20th century, the Hakka diaspora, indigenous peoples, and an influx of refugees from all corners of China following the civil war that ended in 1950.

One of Taiwan’s modern classics, spicy popcorn chicken, became popular in the late 1970s as an easier-to-eat analog to the bone-in variety, hawked by local KFC outposts. Win Son’s riff on that dish is spectacular. Brown coats dark-meat nuggets in a cayenne-laced sweet-potato starch, fries them to a dense crunch, and drenches the morsels in a butter-spiked persimmon hot sauce. The chicken bursts with a distinct poultry tang, offset by shards of crispy fried basil. Wendy’s stock price would go through the roof if the chain figured out a way to take these nationwide.

Taiwanese fare, of course, is not new to New Yorkers, but what makes Win Son particularly compelling in 2018 is that it’s benefiting from a resurgent interest in the Asian nation’s cuisine, fueled by a new crop of young culinarians riffing on their ancestral fare. Eddie Huang was an early entrant with his Baohaus, slinging soft pork buns in Lower Manhattan. More recent additions include Zai Lai in Turnstyle Underground Market, where commuters pay $14 for pork rice bowls, and Ho Foods in the East Village, where prospective diners endure properly long lines for beef noodle soup.

Following is a list of what to order at Win Son, with just one suggested skip.

Stinky tofu: The traditional night market snack, made odiferous via a long fermentation. The aroma makes even the longest dry-aged steaks seem as mild as chicken breast. Dip in sweet soy chile sauce to dial down the durian-esque pungency.

Marinated cucumbers with bottarga: Unlike the tart Sichuan variety, Win Son’s version, laced with a heap of cured mullet roe, is pure umami bliss. The not-too-salty cukes pack the round mouthfeel of MSG-laced bouillon.

Fried eggplant: Batons of the nightshade fried in such an airy way that they almost taste closer to the yeasty fried dough called youtiao than a proper vegetable (on a good night; they sometimes turn a touch soggy). Dip in a tangy black vinegar sauce, then drag it through a swath of kefir cheese, and repeat.

Clams and basil: Cockles steamed in a sauce of Shaoxing white wine, garlic, brown butter, and basil. It’s a straightforward mix of brine and diary, with a proper heap of scallion pancakes for sauce sopping.

BK egg bomb: A riff on a pan-Taiwanese dish, a scallion pancake coated in egg and fried. The Win Son twist is using the bread to hide a layer of chopped raw steak — fatty wagyu doused in lime juice, sesame oil, and doubanjiang, a Sichuan chili bean sauce.

Fly’s head: The classic dish of ground pork tossed with incendiary Thai chile, chopped garlic chives, and fermented black beans (which are meant to evoke the namesake insect). The meaty salad exudes a distinct funk from the beans, and is best enjoyed over a small plate of rice to catch all the meaty drippings.

Beef rolls: A brilliantly drippy mess of star anise- and cinnamon-braised beef shank, wrapped in thin scallion pancakes and cut to the length of mini egg rolls. The bread is essential here because it tames the rampant salts, sweet aromas, and powerful bovine punch of the braise.

Lu rou fan: Caramel soy-braised pork belly, a traditional dish where saucy, smoky swine enriches the rice grains underneath. The pork, enlivened by chile oil and tamed by the acid of pickled greens, is a one-plate meal for $15.

Zha jiang mian: A slow braise of lamb, fortified with Beijing-style yellow bean paste, and softened with cucumbers. This is all tossed with fettuccine-like noodles — and more lamb fat — turning it into what’s essentially one of the city’s best and funkiest bologneses.

Ice Cream Sando: The sweeter analog to the “nutritious sandwich.” It’s made with the same fried mian tuan roll as the shrimp version, but is filled with vanilla ice cream and showered in fragrant cilantro and peanuts. The dairy melts fast under the warmth of the soft pastry, making this a sloppy knife-and-fork affair.

Our review of Win Son 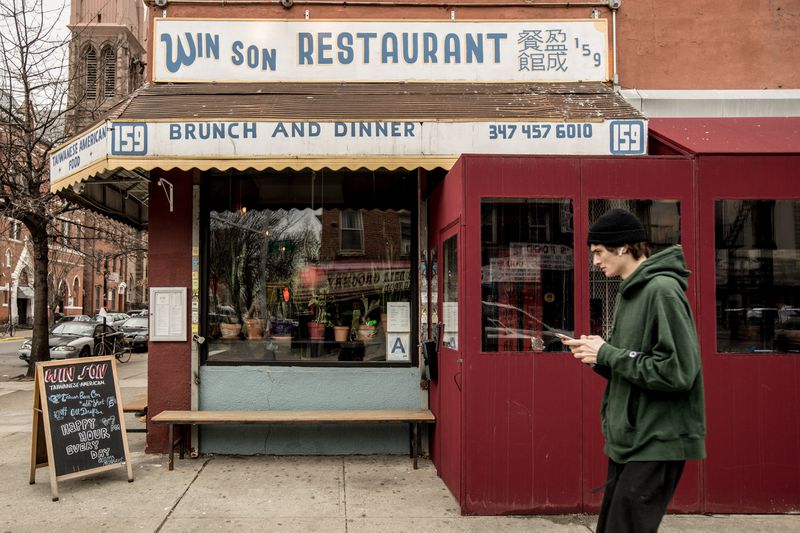 Bonus tip: To avoid a table wait, make a resy for a party of 5 or more, or come super early, right when the venue opens.