Review and information for Camillo

The distinctive food of Rome is enjoying its moment in the moonlight, as a fit successor to our earlier obsessions with Tuscany and Naples. Like Naples, Rome is a pizza town, but unlike Naples, pizzas occur in a bewildering variety of styles. There are round cracker pizzas that can break apart as you bite into them; and thicker circular pies like those of Naples, but slightly crisper. Some pizzas resemble Sullivan Street Bakery’s pizza bianca, oily and bumpy without sauce, sometimes used to make mortadella sandwiches; others are the bready focaccia squares found in bakeries, strewn with zucchini blossoms, onions, or other single ingredients.

But one of the most characteristic styles is the pinsa. Some would say it’s not really a pizza, but an oblong flop of dough rounded at either end like a huarache, perhaps originating in ancient Rome as pizza’s ancestor. The dough is different too, a mixture of grains that cooks up light and airy. To compensate for this lack of weight, the toppings are piled on with a freer hand, including unexpected meats and vegetables. Even in New York, where we’re proud of our wild and crazy pies, the pinsa seems unbound by convention.

The stated purpose of Prospect Lefferts Gardens newcomer Camillo — named after Count Camillo Negroni, the inventor of the negroni — is turning out pinsas from owner-chef Michele Baldacci, a Florence native who’s also behind Locanda Vini e Olii in Clinton Hill. As a result of the restaurant’s name, Camillo’s supporting liquor program is heavy on the negronis ($10). While the normal formula of this strong swizzle involves gin and Campari, one the nine available here is contrarily made with mezcal, while another features artichoke liqueur, perhaps causing the count to spin in his grave.

The bar dominates the front of the restaurant, and its white marble expanse is the best place to dine. The dining room seats around 50 and is defined by old fashioned hanging lamps, beveled mirrors, and a ceiling that looks like the well-worn deck of a clipper ship. It makes you a bit dizzy staring up at it.

The pinsas are spectacular. Five depend on tomato sauce, while three others luxuriate in their white cheesiness. But the difficult choice this represents can be avoided: Divided down the middle, a ninth pinsa, the Romana ($15), mixes both types. On one side is a tomatoey Amatriciana sauce from the town of Amatrice in the Apennine Mountains about two hours outside of Rome, featuring funky hog jowl. The other side is spread with cacio e pepe, the peppery Pecorino sauce, another specialty of the Eternal City.

Turning pastas into pinsas is a magical idea, also seen in New York City’s ziti and lasagna pies. Other pinsas at Camillo are equally startling. My favorite is the capricciosa ($19), a wild ride of heaped-up tomatoes, olives, artichokes, mushrooms, and prosciutto cotto (baked ham). It’s like a lush open-face sandwich you might take on a picnic. Another pinsa features the very southern Italian pairing of pork sausage and broccoli rabe, and there’s also a fine vegetarian pie topped with eggplant, two types of summer squash, and oodles of onions.

If pinsas alone were the province of the restaurant, it would be a fine thing. But Camillo seeks to be a full-blown Italian restaurant, too, dotting its menu with dishes associated with Rome, as well as other quirky regional cooking from around the country. From the Roman stockyards comes coda alla vaccinara ($15), a dense ragu of boneless oxtail that dukes it out in the bowl with thick, wide, fresh pappardelle. Equally splendid are two lamb-stuffed cannelloni smothered in béchamel like mutant enchiladas.

The appetizers have shifted around quite a bit since the restaurant’s opening last September. I was particularly fond of cotechino, a cooked pork sausage that arrived on a bed of lentils, the way it’s done in Bologna. It’s a dish usually served around New Year’s and has since disappeared from the menu, though the team says it will return next December. Meanwhile, the bowl of baby octopi awash in gritty red sauce that I didn’t much like — disappointing if you crave charred tentacles — still lingers. The best current app is anchovies on buttered toast ($8), in which dairy and carbs mellow the salty and stinky fish. Even if you don’t normally order anchovies, you’ll like these.

There are always at least three piatti, which should each be shared by at least two diners. The fritto misto ($17) is here interpreted in an all-veggie fashion, and comes hot and greasy on top of a sheet of brown paper. Exercise the chicken option ($3 more) to add an extra highlight to the perfectly fried zucchini, onions, artichokes, and cauliflower. Even better is a big hunk of roast goat in gravy, served on one occasion with cubed potatoes and on another with braised chicory.

After eating pinsas, apps, pastas, and the voluminous main courses, maybe you’re not ready for dessert. But the slew of closers at Camillo are the soul of simplicity, including a wedge of olive oil cake speckled with pistachios, or a creamy panna cotta dribbled with strawberry sauce. Just the way they do it in Rome.

Our review of Camillo 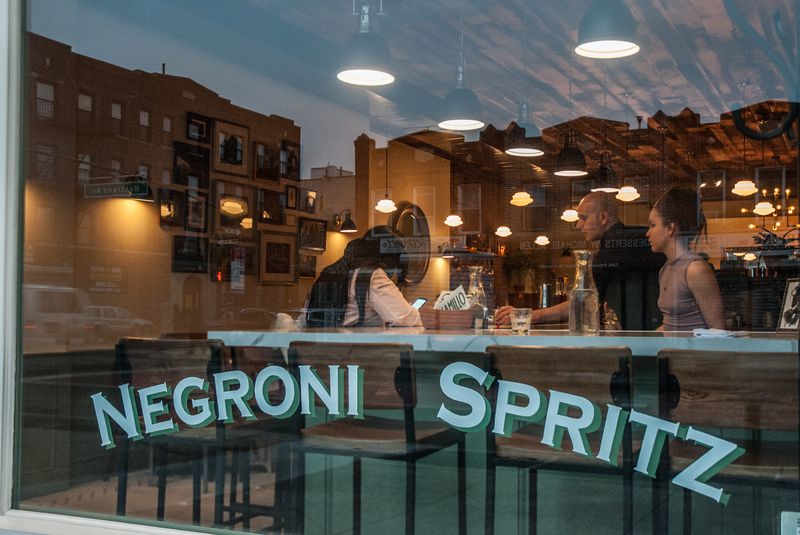 Cost: Dinner for two, including one app, one pinsa, and one pasta, two glasses of wine, plus tax but not tip, $70

What to drink: For those into cocktails, the negronis are worth checking out, but the best accompaniment to the trademark pinsa is an on-tap Moretti beer or a bottle of Lambrusco.

Bonus tip: For the budget conscious, the on-tap wines are a very good deal at $20 for 500 ml (try the prosecco); not showy or complex, they go very nicely with pinsas and pastas.