The menu at Szechuan Mountain House is eclectic, creative, and hits more than it misses

The original Szechuan Mountain House was one among a raft of modern and more expensive Sichuan restaurants to hit Flushing during the last three years. Eschewing the bursts of red and communal tables of their predecessors, these places flaunted stylish interiors with intimate seating. Some featured rustic elements meant to evoke Chinese villages; others were more East Village-y, with exposed concrete surfaces, deejays, and futuristic light fixtures.

Opening on an interior courtyard of a new shopping and hotel complex off Prince Street, Szechuan Mountain House was an instant hit among well-heeled dating couples out for an evening of innovative food in a romantic atmosphere. More recently, a branch daringly opened on St. Marks in the East Village. It grabbed the second-floor space formerly occupied by Grand Sichuan, itself an early advocate of the Sichuan peppercorns that have become ubiquitous in the neighborhood.

A stone-clad koi pond and burbling waterfall confronts you upon entering the space. Enclosed bamboo booths trail off into an interior decorated with pottery and other elements, intended to evoke the eponymous mountain retreat. But far from mounting a menu obsessed with the rural or even the urban food of Sichuan, the bill of fare is an eclectic document. In addition to Sichuan standards and Sichuan-themed inventions, it borrows dishes from other regions, leaping from Hunan to Dongbei to Beijing to Hong Kong.

Part of the appeal of both Mountain Houses is dramatic platings. Take the first item on a menu: sliced pork belly with chile garlic sauce ($10.95). Looking like thin slices of pale bacon, poached pork belly hangs over a dowel like laundry on a line, interspersed with slices of shaved cucumber. Underneath, a receptacle of chile oil with a wad of mashed garlic is destined for dipping. The contrast of the raw garlic’s pungency and the pork belly’s blandness proves unforgettable, and there’s no better dish for audience participation in town.

Sometimes this awesome creativity runs off the rails, though. Less successful is “grilled beef ribs with steamed bun” ($21.95). In actuality, the ribs should be singular and the bun plural, since the dish consists of a single humongous beef rib, somewhat resembling the sort found at the city’s Texas barbecues. Alongside are the kind of folded, steamed bao you now see in nearly every Asian fast food spot. The meat has been cut from the bone, and it’s tough and gristly from being roasted too fast and too hot, which is why the same rib is cooked “low and slow” in barbecues.

Also on the novel side are round shrimp fritters sided with sliced spuds, like pink ping pong balls with paddles; and planks of mung bean starch in chile oil and Sichuan peppercorns that wiggle and wobble in a glistening array. There are Sichuan standards, too, including twice-cooked pork, kung pao shrimp, and a ma po tofu ($10.95) that manages to taste better than any other with its silky tofu, earthy fermented bean paste, and daring oiliness. When it wants to, Mountain Szechuan can serve straight-up Sichuan, and it doesn’t stint on the peppercorns.

Some Sichuan dishes are charmingly amplified. Peanuts are introduced to the usual ox tongue and tripe in chile oil, adding crunch to the slipperiness. And the full complement of organs and other varieties meats is in full force. Indeed, Szechuan Mountain House should receive plaudits for offering pig intestines and kidneys, fish maws, curdled blood, and the notably-named “strapping cattle throat” ($10.95) — rubbery white strips of integument that’s popular in Chongqing, a major municipality in southwest China.

Perhaps in adherence to the current proclivity for eating lots of vegetables, Szechuan Mountain House has some of the most interesting vegetarian dishes in the city, scattered throughout the menu and not just in the section called “Vegetable.” A brilliant bowl of yellow corn kernels come individually coated with duck egg yolk, giving them a unique texture and making them taste cornier than buttery theater popcorn. The signature fried rice is ramified with mustard greens, while a dish of fried lotus roots and celery provides a spectacular snap that you can hear as diners around the table attack it, with a subtle flavor that you’ll dream of that evening.

But the most exciting aspect of Szechuan Mountain House lies in the fact that the daring menu hasn’t been made blander for a perceived East Village audience, mirroring the sorts of experimentation and quest for novelty seen heretofore mainly in the new Sichuan restaurants in Flushing — and presumably, in China itself. 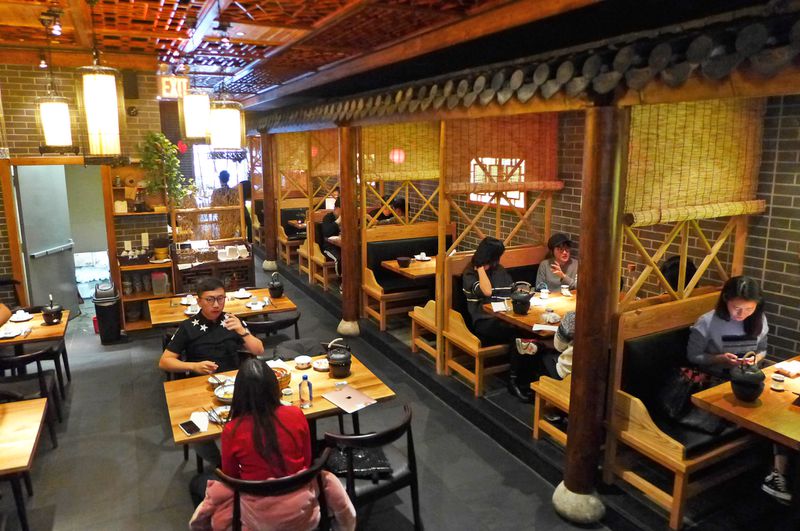 Cost: Dinner for two, including two apps, three shared main dishes, and two beers, plus tax but not tip, $100

What to drink: The best beverage is tea, which is presented in an elaborate service. Beer and wine are also available.

Bonus tip: Over the past few weeks, the restaurant has become wildly popular, and no reservations are accepted except for parties larger than 7. My advice: Go at an off hour on a weekday with a party of no more than four.