Share All sharing options for: The Lobster Club Is Just Another Mediocre Big-Box Asian Restaurant for the Rich

Review and information for The Lobster Club

The $10 million restaurant, a reboot of the old Brasserie in the landmark Seagram Building, could pass itself off as a Starburst-colored set piece from Charlie’s Angels: Full Throttle.

A woman’s gold wrap dress mirrors bronze panels adorning the walls. A couple smooches on a sea-green couch, while an uneaten volcano of pink shaved ice sits untouched at a nearby table; the dessert matches perfectly with the pink, Eero Saarinen-esque chairs. Servers in paint-splotched pants walk across a floor that mimics a Jackson Pollock canvas.

Shelves are lined with Picasso plates; a back room is filled with Picasso-inspired sculptures; and floating booths are decorated with interpretive collages of Richard Prince’s Picasso nudes. Peter Marino (Louis Vuitton Soho, Dior London) is the big-deal designer, and for those who aren’t familiar, there’s a prominent photograph of him, in his classic leather biker gear, near the restrooms.

Everyone sips at lychee-tinis, yuzu sake-tinis, and melon mojitos at the three-deep bar. The crowd freezes as Martha Stewart marches out with her entourage.

Taken all in from the entrance balcony, the Lobster Club is a ball of pure, super-saturated, hyperchromatic energy, a departure from the solemn sushi or kaiseki temples that have been popping up around town. Head chef Tasuku Murakami used to work at Azabu, one of those Michelin-starred temples. And now he’s here at The Lobster Club, whipping up spicy toro rolls completely devoid of tuna belly’s signature silky texture. Those rolls wouldn’t be so infuriating if they were served at a cheap takeout spot in Penn Station, not here, as a $27 snack. It’s some of the city’s most disappointing high-end sushi.

It’s been nearly a year since the restaurateurs/showmen behind Major Food took over culinary operations at the Seagram building, the site of the old Four Seasons complex. The first space to open was The Grill, a Kennedy-era chophouse that tips its hat to the postwar optimism of the ’50s and ’60s. The second was The Pool, which fast-forwarded to the present as a modern American ode to the world’s oceans — and a fancy contender to Le Bernardin.

The Lobster Club falls somewhere in between, celebrating the chic Japanese and pan-Asian brasseries of the 1990s and early aughts. Sometimes this means channeling Nobu, with a sweet, $36 pile of crab sitting in a fragrant pool of vinegar and cilantro. Sometimes this means leaning in the direction of China and Indonesia, as with wok-fried lobster tail, the crustacean’s meat glossed with a lip-tingling layer of sambal. Sometimes this means referencing a curry-ya through chicken wings covered in a explosive dry rub of turmeric, cayenne, allspice, cloves, and piri piri.

And sometimes this means paying tribute to cheap karaoke joints with sake bombs or to post-war Tiki spots (and Red Lobster) with coconut shrimp.

Generally speaking, there are four ingredients to Major Food’s special sauce. The first is an electric sense of theatricality, from the swaying palm fronds of Santina to the exuberant tableside flambes of The Grill. The second is high-profile art or design collaborations with the likes of Renzo Piano, Vito Schnabel, and Merino. The third ingredient is a smart dose of Quentin Tarantino, which is to say mining the B-level dregs of popular culture and turning the undervalued and underappreciated into award-winning gold. A fine example is the Michelin-starred Carbone making haute analogues to comfort classics like rigatoni alla vodka or veal parm.

That $67 parm, incidentally, brings us to the fourth and final part of the equation: Major Food knows how to charge an insane amount of money for what is usually pretty great food.

Dinner at The Lobster Club will easily run about $150 per person. The owners know that good ingredients, peppered with a touch of nostalgia and a bit of creativity, can command a markup. That’s not necessarily a bad thing. Whether it’s Christina Tosi refining cereal milk or Wylie Dufresne rethinking Combos, modern gastronomy can remind us why we loved a dish from long ago and impart cultural cachet. This explains why The Lobster Club’s sake bomb and coconut shrimp are actually two of the most thrilling dishes here.

The bartender instructs you to drop a shot of yuzu sake, the color of limoncello, into a glass of yuzu-laced lager; the result isn’t so much a drunken 4 a.m. mistake as a balanced beverage with brilliant notes of sugar and concentrated citrus. The fried rock shrimp, in turn, collapse in the mouth with just a flick of the tongue, the coconut gently sweetening the natural oceanic sugars. Even the tired dish known as teriyaki is a magical blend of sugar and soy, taming the vibrant oils of medium-rare king salmon.

If only the rest of Lobster Club truly felt as if it were trying to improve upon the diverse traditions of New York’s Japanese-leaning spots.

Sansho octopus, packing an impressively crispy sear, boasts none of the namesake peppercorn’s signature numbing — a sensation that’s generally accessible at any good yakitori spot. Tuna with rice crispies, bland and underseasoned, pales in comparison to a Perry St. version. Raw beef with uni, a dish that first wowed me a decade ago at Takashi, is somehow less thrilling here at $37 for a few tiny bites.

Teppanyaki, the entry point into Japanese cuisine for so many suburban Americans, comes across as less compelling when the performative, Benihana-style griddle is hidden in the kitchen — and when it produces half a chicken whose skin is as floppy as bologna. Better is the concentrated study in beef fat that is wagyu skirt steak.

And finally, there is the sushi. A $68 chef’s platter arrives with unseasoned fish, and rice that ranges from firm to barely warm to chilly to gummy. On another night, the rice is well textured, but entirely cold. Palate-perking wasabi is sometimes absent, and sometimes used in nuclear proportions. The grains exhibit little vinegar to balance the fattiness of (very good) deepwater snapper. Murakami’s sushi is simply raw fish over rice. It is distinctive only in its mediocrity.

The highlight of any meal at The Lobster Club occurs near the end, when a waiter ferries over a foot-high cone of shaved ice ($15), half of it laced with cream, the other half with blood orange. This kakigori is essentially a giant Creamsicle, with a level of complexity that far surpasses the classic frozen treat. Some bites are bitter from the citrus, others silky from the dairy, and still others refreshingly watery. And a bit a pleasant cognitive dissonance ensues when the sturdy-looking structure yields an airy-as-cotton-candy mouthfeel.

One could speak as highly of the yuzu meringue tart, intensely sugary at first, with a sneaky acidity that builds as the dessert is consumed. And surely there are no other green-tea puffs with such a tightrope balance of tannic matcha and palate-softening cream.

The shame, of course, is that while The Lobster Club’s website praises the work of both Murakami and Marino (as well as the head bartender), the name of the pastry chef, Stephanie Prida, is omitted. She’s nowhere to be found on The Pool’s or The Grill’s websites either, where she oversees the four-star sweets; the same can be said of the latter restaurant’s chef de cuisine, Ashley Rath.

For a hospitality group that understands the story of a restaurant begins outside the restaurant — just as the hopes and expectations of a potential moviegoer are set by the trailer — it’s hard to fathom why such talented folks are left out of the credits. A prospective guest looking for a different culinary voice could end up wholly overlooking the restaurant because of these omissions. Without Prida, The Lobster Club is, for the most part, just another big-box Asian restaurant, a luxury spot hawking generic sushi to rich people.

Our review of The Lobster Club 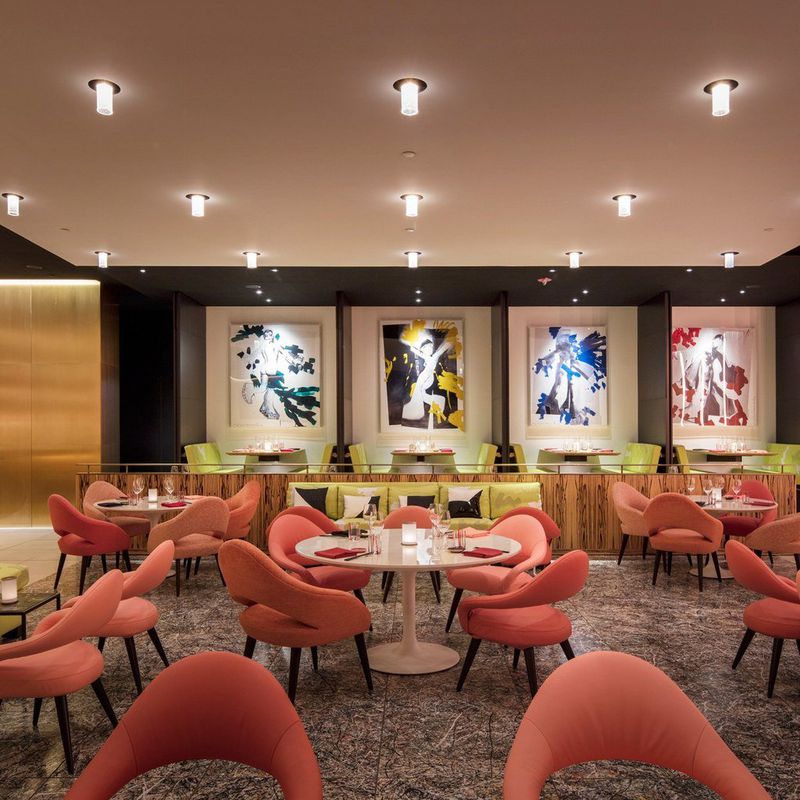 Bonus tip: The spicy fried rice is pretty decent if you want to spend $22 on a side of rice. Otherwise, the $15 garlic rice is a (slightly cheaper) substitute.