Bluebird Is Mall Dining at Its Worst

With soggy fish and chips and an ammonia-tinged tartare, the British import manages to be the worst new restaurant in NYC this year

Share All sharing options for: Bluebird Is Mall Dining at Its Worst

Review and information for Bluebird London

To comprehend the complex awfulness of Bluebird London — a soulless, overpriced, and curiously packed British import at the Time Warner Center — it helps to recall some vintage English sketch comedy.

The actor Rowan Atkinson, in his famous “Steak Tartare” skit, contorts his face a thousand different ways while choking down a grayish patty of raw meat. Instead of sending it back, however, he hides the remnants in a small tin of salt, in a woman’s pocketbook, and down the pants of a tableside violinist. Everyone else in the restaurant is oblivious.

The bit riffed on multiple themes, from food as an acquired taste to the shame of appearing insufficiently cultured in pompous environs. But there was arguably a plainer lesson tucked in there too: Sometimes expensive cuisine is just bad, and it’s strange when no one else in the dining room seems to notice.

Such is the case at Bluebird, the stateside debut of D&D London, one of the U.K.’s most prominent hospitality groups. It’s a sleek brasserie that, despite its manifestly dreadful food — from soggy fish and chips to blubbery duck — can fill up with hundreds of patrons during DJ-fueled brunches. It’s also a venue that sent out a steak tartare so abominable, I struggled to keep it down.

Good tartare deploys powerful seasonings to highlight the subtleties of good steak. But the Bluebird version I sampled leaned on spiced ketchup and capers to mask something on the verge of spoiling. The initial flavor was bland, quickly followed by a fetid, ammonia-like tang. It was an aroma that recalled room-temperature hamburger meat from a grocer that lost power. I felt my eyes water up as I chewed. I tried to swallow. I felt my entire GI tract prepare to purge. And then I regained my composure and pulled an Atkinson, which is to say: I spat the nasty bits into a napkin and stuffed it into my briefcase.

Let me be clear: Bluebird is New York’s worst new restaurant of 2018. For those who hoped to avoid this sort of thing anyway, keep in mind that next year, D&D will open up an 11,000-square-foot brasserie in the sprawling Hudson Yards complex.

To be fair, the Columbia Circle venue, situated in the former A Voce space, never promised culinary fireworks; the London original has always attracted more attention for its chic environs than its culinary accomplishments.

Bluebird in New York, true to form, is pretty. Green booths are arranged in a sinuous S-shaped arrangement. Bottles of gin stand on a plastic sculpture meant to evoke a human head. Purple seats serve as vibrant accents against off-white sofas. And for select tables near the windows, nighttime diners get a brilliant view of Central Park South and Trump Tower. Everyone else experiences obstructed vistas and dining-room reflections.

For a blunter sense of the priorities here, consider the following: The restaurant’s website dedicates an entire page to the bios of the brunch entertainment. For example: DJ Sweat apparently faced off against an actor from The Wire in a DJ battle. Now you know.

The chef, in turn, is publicized with just two short words: his name, which I’ll respectfully withhold since the menu feels like it was cobbled together by a mercenary consultant or an AI-concocted algorithm instead of a culinary professional. What else could explain “Brooklyn” charcuterie, “Long Island” burrata, poke bowls (of course there are poke bowls), or those infamous 2005-era favorites, lobster mac and cheese and truffle fries?

The mac tastes like what would happen if a college student microwaved ziti with supermarket shellfish bisque and waxy pre-shredded cheese. As for the truffles, the black fungi shavings adhere to two or three mealy, undercooked fries like glue. And those poke bowls betray the good name of that Hawaiian mainstay, typically a dice of raw fish bursting with notes from additions such as soy and sesame. Instead, the blocks of tuna are as icy and insipid as the quinoa with which they’re paired; it tastes as if it died in the walk-in cooler.

For a marginally better starter, try the foie gras terrine, though that would mean paying $34 for a few bites of liver over a pile of cold green beans and a single artichoke. The prevailing culinary ethos behind that appetizer seems to be: Clean out the fridge.

Bluebird’s sleepy Continental preparations are par for the course at the Time Warner Center. As so many currents of diversity pulsate throughout the city’s dining scene — from modern Chinese to new Indian to creative Vietnamese — this multibillion-dollar complex remains overwhelmingly European and shockingly exorbitant. It stands as a bulwark against the multi-ethnic traditions of nearby Hell’s Kitchen.

There are, of course, outliers. David Chang opened an affordable ramen shop here this year. And Masa serves some pretty good sushi for those who’d like to spend $1,000 on a meal for one. Those aside, the dining options here trend a bit monochromatic.

And at the Mandarin Oriental, there’s a duo of cocktail spots where a few rounds of drinks can cost more than a ski jacket, and a place called Asiate, where the kitchen channels the global East by seasoning French food with lemongrass.

Diversity is not a driving force when a small group of humans at a multi-billion dollar real estate company curate the dining selections for many. That’s something to think about as the Hudson Yards complex nears completion. And that’s something to contemplate over a $65 strip, Bluebird’s cheapest steak at dinner during a recent visit (now: $58). The cut lacks much of the compelling sweetness, complex char, or supremely beefy essence that dry-aged meats typically have; it’s a squishy cut of meat with an overpowering funk. I paired it with truffle madeira jus ($8) that had all the flavor of powdered onion soup mix. I also ordered fries, which prompted the kitchen to send out a second order of fries as a gift to this solo diner, for no particular reason. My two-course meal that night, with two drinks, cost $159 after tax and tip.

In a city teeming with Eurocentric gastropubs, trattorias, bistros, and brasseries, the opening of a new one raises the obvious question: What is it really adding to the our culinary scene? Is it obsessed with moving the needle forward, like a Frenchette? Or is it dedicated to recreating the classics better than anyone else, like a La Mercerie? It’s not hard, after all, to find an average terrine, cheese souffle, or burger in New York, and Bluebird’s are all decidedly below average.

The farmhouse pork pate recalls supermarket ham wrapped in old bread. The twice-baked comte souffle forgoes ethereal silkiness in favor of grittiness. And the burger suffers from an almost equal ratio of cheddar to beef; the bland patty is so undercooked it almost takes on the texture of warm fondue.

Roast duck for two ($98) arrives almost wholly unseasoned, with mealy flesh and a thick, under-rendered layer of fat. Better is the lobster thermidor, whose delicately cooked meat packs tons of oceanic flavor — just be sure to eat around the leaden bechamel glaze, and understand you’re paying $38 for an appetizer’s worth of meat.

If pressed to order anything at dinner, a mound of crab with trout roe expresses its maritime punch with aplomb. And at peak brunch, one can expect a great English breakfast — rich morcilla, porky sausages, baked tomatoes, sweet beans — as well as a dry pain au chocolat, a stale croissant, and a DJ who spends more time checking his iPhone than working the turntable. He looks bored.

Desserts are respectable enough, from the sticky toffee pudding, which is sufficiently sticky, to the classic Bakewell tart, a blend of fragrant almond paste and orange marmalade. With a cup of tea, that pastry would be a civilized choice for a rainy afternoon in the city. Otherwise, for a more reliable view of Central Park in an equally basic setting, try J.Crew next door.

Our review of Bluebird London 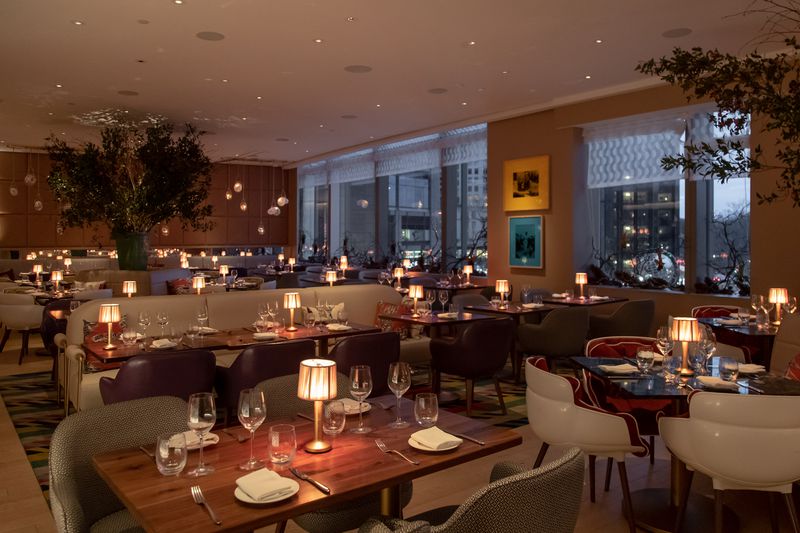 Bonus tip: Come before sunset for more panoramic Columbus Circle and Central Park views from throughout the dining room.