The pan-regional Indian restaurant sends out homey dishes with punch

The “oohs” and “ahhs” follow dum biryani ($19) as it bobs across the room. The casserole is topped by a sheet of naan dough that imprisoned the volatile flavors as the dish baked. This sealing-in is what the “dum” refers to, in a recipe attributed by the menu to the far northern city of Lucknow, India, though biryani is more often associated with the southern city of Hyderabad.

Arriving at our table, the waiter takes a big spoon and saws the nicely browned crust with a circular motion. Then he flips the flap of crust over so the steam spirals out, redolent of saffron and sweet spices. Inside, rice shimmers with chunks of bone-in goat and shredded herbs. The first bite proves exquisite, especially when further moistened with the tart pomegranate raita provided.

“My purpose at Adda,” executive chef Chintan Pandya told me one evening, “is to reproduce the true taste of Indian home cooking.” He continued, “I’m from Gujarat and Mumbai and owner Roni Mazumdar is from Kolkata in West Bengal, so we come from different places, but certain things are shared. I’m trying to cook the way our mothers did.”

It’s an effort rarely found in New York City Indian restaurants: Not only is Adda making a conscientious effort to dig into the regionalities of Indian cuisine, it’s doing so with accessibly priced, homestyle fare, where all dishes fall under $20.

Many chefs at Indian restaurants in neighborhoods across NYC adapt recipes for what they think are American customer preferences, and the more ambitious pan-regional places skew more expensive, including Pandya’s Greenwich Village restaurant Rahi. But Adda does neither. And the quest to replicate home cooking at Adda is, perhaps, why the dishes are a degree hotter and richer, with some ingredient choices and combinations not commonly found in other New York Indian restaurants.

Take “seasonal saag paneer” ($15). Many restaurants stick to mustard greens and spinach or substitute spinach entirely, which makes for a mellower dish. But Adda’s version is composed of whatever greens happen to be in the market in the moment. The other evening, it included red amaranth leaves, produce that’s common in traditional Indian cooking and now stylish in the States as an antioxidant.

What’s more, the paneer is house-made, which hasn’t been the case in many NYC Indian restaurants for the last decade or so, when prepackaged paneer became generally available. The problem with the plastic-wrapped paneer is that it’s way more rubbery. Adda’s paneer, on the other hand, is crumbly and fresh, contributing to the best version of saag paneer in the city.

The same incredible paneer constitutes a focus of the menu. Have it in chile paneer tikka ($7). Here, a spicy red sauce has been painted on the grilled squares; they tumble onto the plate like paving stones. Less exciting is paneer khurchan, which tosses the fresh cheese with peppers in a tomato sauce that obscures the cheese’s delicate flavor.

While a few Indian restaurants focused on regional cuisines have incorporated pork (prevalent in Goa and Karnataka) and beef (a Keralan favorite) into their menus, Adda sticks with the standards of chicken, lamb, and goat, which pertain in most restaurants here and in India. Lamb is showcased in one special, a hulking ground-meat seekh kebab ($13) that’s an especially good deal if volume of meat is your objective.

But the best dish among a dozen meat and poultry choices is a goat curry called junglee maas ($18), or “wild meat,” a reference to people cooking what they hunt. Goat curries, of course, are ubiquitous at Punjabi steam-table restaurants throughout the city, often in stunning renditions. Adda, though, one-ups even the best of them with the junglee maas. The bones are left in, as they should be, and the gravy is at once fiery and pungent. If you love goat, this curry will drive you crazy and leave your tongue burning. Other standards of top steam-table restaurants are produced here in even better renditions too, including a butter chicken so rich it boasts streaks of actual butter on the surface.

Offal cravers will find a pao (round roll of Portuguese origin) topped with chicken livers, and a bheja fry newly added to the menu — gingery goat brains. And though meat shines here, vegetarians will find plenty to love on Adda’s bill of fare, including globular lotus-root kofta akin to croquettes that rest in a tomato sauce laced with fenugreek, and a tandoori-cooked cauliflower topped with a layer of Amul, a processed cheese based on cheddar that’s in the same family as Velveeta. My mom would have loved it.

Adda lies on the border of Long Island City and Sunnyside in an industrial neighborhood, with the 7 train clattering overhead and LaGuardia Community College directly across the street. The inside features a counter and overhang at the rear made of corrugated tin, and newspapers are plastered all over one wall, modeled after hangouts in India. While waiting for your food, study the papers for a thumbnail history of modern India.

Pandya and owner Roni Mazumdar also preside over Rahi, an upmarket restaurant in the West Village that plays fast and loose with Indian regional cooking, sometimes inflecting it with Japanese and Middle Eastern twists.

But the food at newcomer Adda is simpler, cheaper, and less beholden to current trends demanding that the camera eats first — which is a good thing, and which evokes the kind of Indian food I first fell in love with at steam tables across NYC. And in pursuing the actual home cooking of regions across India, Adda gives us a new perspective on an already familiar cuisine.

Our review of Adda Indian Canteen 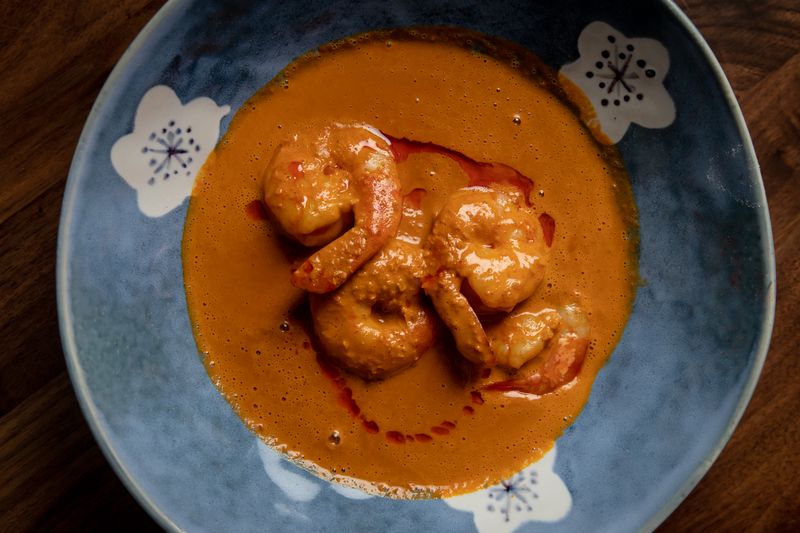 Cost: Dinner for two, including two apps, two main dishes, a bread, and two Indian sodas, plus tax but not tip, $60.

What to Drink: You might want to try an imported Indian soda like Thums Up or Limca. Currently, Adda is BYOB, and there’s a 7-Eleven with an abysmal beer selection two doors down to the east.

Bonus Tip: One dessert is usually available, a kheer (rice pudding) snowed with crushed pistachios and cashews attributed to the owner’s father. It is excellent, but so rich that two should share.