Pasta Temple Misi Fails to Deliver on Its Signature Item

Share All sharing options for: Pasta Temple Misi Fails to Deliver on Its Signature Item

Review and information for Misi

“Even Jennifer Lawrence had to wait for a table at Brooklyn hotspot Lilia,” a New York Post headline read this spring. One can relate. A new rite of passage for New York gourmands is approaching the host at the Williamsburg destination and getting quoted a wait time that seems mathematically impossible. Those who arrive just before 5 p.m. will encounter a line that stretches down the block. And those who check for online reservations will think they’ve happened upon the ticketing website for Elton John’s goodbye tour — nothing available.

The reason for such insanity is the cooking of Missy Robbins, a singular commodity in a city where Italian food is nothing less than ubiquitous. No one else seems to lace their garlic bread with speckles of orange bottarga, or dust their mafaldini with coarse grinds of pink peppercorns. When Pete Wells came to review Lilia in 2016, he awarded three stars and issued a specific bit of praise: ”Pasta made by Ms. Robbins is a direct route to happiness,” the NYT critic wrote. Demand quickly outstripped supply.

A sequel was all but inevitable. And so in September Robbins opened a second spot, Misi, in the heart of the $3 billion Domino Sugar redevelopment. Here the focus would be more streamlined. While the menu at Lilia spans multiple categories, Misi’s only starters are vegetables. The only desserts are gelati. And the only mains — beefy specials notwithstanding — are pastas, all made in a 325-square-foot, temperature- and humidity-controlled room.

Feel like swinging by? As I write this, the next available reservation is at 11:00 p.m. On a Monday. One month from today. For counter seating. Walk-ins who show up late might sit down immediately, while those who swing by at 5:30 p.m. on a Saturday can wait 90 minutes or longer for bar seats. It’s all enough to make one assume that Robbins has again given New York one of its best new Italian restaurants. If only that were the case.

Misi, at the very least, is a scene. Here’s Bobby Flay on a date. There’s Action Bronson, sporting his signature beard. Golden helium balloons float about in the private room next door. Four hosts greet patrons behind a low-rise table; it recalls the check-in counter at a chic charity event. The open kitchen shines just brightly enough to flatter patrons at the chef’s counter. The bartenders pour frothy bellinis that diners suck down in seconds. The servers whisk over uneven pastas. The prime window seats overlook the Williamsburg Bridge in all its nocturnal... wait, there’s an issue with the pastas?

There is. The noodles range from serviceable — like a forgettable pappardelle with chickpeas — to nearly disastrous — an oppressively saline bowl of fish sauce-laced linguine. In fact, the pasta problems are distinct enough that they can stop a bona fide Robbins aficionado mid-sentence.

A few weeks ago my companion was monologuing about the genius of the chef and her roasted romanesco. Robbins showers the toothsome florets with an electric blend of lemon juice, olive oil, and coriander, imparting the stubby brassica with a vibrancy that’s at once electric, luscious, and fragrant. Then I watched my friend turn silent as he tried the carpaccio-like corzetti. Handsome rounds of pasta sat underneath an insipid tomato sauce and a canopy of fresh basil; the herb obliterated whatever nuance there might’ve been in the first place.

This is not the Missy Robbins we know, the mind behind one of the pastas of the decade: Lilia’s agnolotti with sheep’s milk ricotta. She uses saffron-infused honey — a bit of sugar and perfume — to counteract the tartness and funk of the cheese. The interplay of flavors is almost scientific in its balance, and yet the pairing is as simple as a composed cheese plate.

Or consider her rigatoni al diavola, also at Lilia. Spicy tomato sauce is a common enough preparation, but it somehow tastes cleaner and more alive under Robbins’s control. The San Marzanos are brighter and more acidic than elsewhere, while the Calabrian chiles exude a warming spiciness.

It’s from these two dishes that one derives a certain Tao of Robbins. The chef tweaks classic preparations in such a way that they taste fresh and revelatory. And she concocts gently creative pastas that somehow feel intuitive and seamless within the multitudinous traditions of Italian cooking. She’s neither an avowed regionalist, like the devoutly Tuscan Rita Sodi, nor a more freeform experimentalist, like the chefs at Don Angie. At her best, Robbins is a pasta pragmatist, drawing on countless styles and influences to make absolutely inimitable noodles.

At Misi, by contrast, the only consistently impressive thing about the pastas is their al dente firmness.

Robbins can do better. She concocts a briny (if thin) clam broth and pairs it with a pile of gently mealy malloreddus, a small Sardinian gnocchi. The golden liquid doesn’t permeate the bland pasta, nor does the dish bring any of its promised saffron aroma. Rigatoni, boasting a tomato sauce with 30 cloves of garlic, assaults the palate with salt and cheese. Strangozzi, long, thick noodles, get tossed with a one-note pork ragu; the dish begs for a rounder flavor (and maybe just a touch of acid). And linguine with anchovy and colatura — an Italian fish sauce — packs a level of salt that gives the brain a very distinct message: Stop eating. Which we did.

And then there were the white truffles. The seasonal fungi, at their best, exhibit a pungent fragrance that lingers in the air on the palate for minutes. Here, they’re shaved over an otherwise fine fettuccine with Parmesan and buffalo butter. But the aroma is short and flat, like that of a Designer Imposter cologne instead of the real thing. At $91, it could put a novice off this luxury forever.

The only pasta that shows any real sign of classic Robbins brilliance are the occhi, little ravioli that the cooks stuff with sheep’s milk ricotta and drench in butter, bottarga, and lemon zest. Not a single element falls out of balance; the warm dairy heats up the roe, releasing its perfume, while the aromatic citrus and puckery cheese keep the maritime tang in check.

The smart strategy at Misi is to order the occhi and stock up on another forte of Robbins: vegetables. Cooks roast eggplants until they exhibit the texture of pudding and drizzle the insides with crimson Calabrian chile oil. You scoop out the smoky, spicy, fleshy insides with a spoon and eat this happy dish like a child devouring ice cream. The kitchen takes grilled bread the thickness of Texas Toast and pipes whipped ricotta on top. The cheese shimmers like marshmallow fluff. Diners finish plating the crostini themselves, placing blistered and vinegared peppers on top. The result is pure cream, char, and crunch.

If a porterhouse for two is offered, order it ($110). The meat veers away from the prevailing New York style of steak, an ode to aging and blue cheese funk. Robbins instead opts for a more cheffed-up preparation, crusting the exterior in fennel pollen, charring it rare, and drizzling enough lemon juice over the cut to qualify it as a modern, high-acid dish. The flavors are simple and pure: concentrated beefiness followed by the mellow sweetness of singed anise.

Steak, of course, calls for ice cream. Mint gelato manages to exhibit the assertive grassiness of the herb without any of the menthol-like sting. Toasted almond, as tan as khakis, pushes the envelope on what a frozen dessert is; it mirrors the texture and richness of finely ground nut butter. And fior di latte does what that flavor does best: expresses the taste of fresh milk as cleanly as mozzarella.

In this shiny slice of Williamsburg, the gelati are a fine way to end what’s, unexpectedly, a perfect steakhouse meal of sides, martinis, wine, and, if it’s available, that porterhouse. But as a pasta spot that people wait a month to get into for an 11 p.m. reservation, it needs work. Robbins, who helped make regulars out of the Obamas during her days at Spiaggia in Chicago, is unquestionably one of the country’s great Italian chefs. But for now, Misi is just another exclusive restaurant in another exorbitant neighborhood.

Our review of Misi 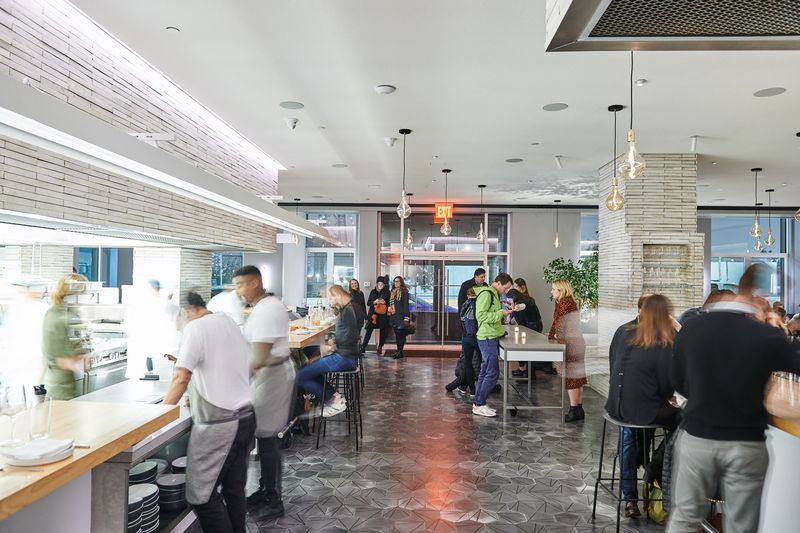 Bonus tip: Sometimes walk-ins are accommodated immediately. Sometimes the wait can stretch past 90 minutes. And sometimes the hosts stop taking names by 8:30 p.m. No one picks up the phone to chat about wait times; an answering machine advises to email for immediate assistance. An email to that address was not returned during a recent dinner service.