Share All sharing options for: Kish-Kash Delivers on the Comforts of North African Fare Through a Perfect Couscous

Review and information for Kish-Kash

With its nuanced use of precious spices and inspired flavor combinations, Moroccan cuisine is among the world’s tastiest. The country lies at the end of spice routes that span the Sahara, with a mixed population of Berbers and Arabs, but one that also had a substantial Sephardic Jewish population during the pre-Israel era. Additionally, the country was colonized by Spain and France. All these influences come into focus in a subtle and sometimes playful cuisine.

This and other North African cuisines are the centerpiece of the menu at Kish-Kash, which concentrates solely on one dish: couscous. The new restaurant from chef Einat Admony, who was born in Tel Aviv and also operates Balaboosta and Taim, opened in June on a shady stretch of Hudson Street in the West Village, between Morton and Barrow streets. Two welcoming benches sit out front.

Inside, an airy modern interior is lined with geometric tiles in grayish and greenish shades, reflecting Islamic design traditions, mixed with a certain Swedish flair to the prim and nicely padded furniture. No reservations are taken for smaller parties, the tables are closely spaced, and an open kitchen lies at the end of the room. The bill of fare is short, offering only four apps, three sides, and six versions of couscous, plus specials. While the atmosphere and limited focus suggest a fast-casual joint, the excellence of the food shouts “fine dining.” In fact, Kish-Kash feels like a new sort of hybrid.

Few dishes this year have landed with such a bang as Admony’s chicken tagine couscous. Let’s look first at the couscous itself, presented on the side rather than underneath. In many Moroccan restaurants, it arrives studded with lamb, chicken, and merguez, dubbed “royal couscous.” In truth, these couscouses are often dry as blown desert sand.

At Kish-Kash, the chef and her minions endlessly fuss over it, steaming and re-steaming. Despite the small size of the couscous she deploys — the couscous, which represents crushed durum wheat semolina, is available in dozens of diameters — the result is memorably moist, and not the least bit sloppy.

The implement she uses is known as a kish-kash, which consists of a pair of pots, one poised over the other. With the brilliant couscous produced therein, the main courses fall into place. Foremost is the aforementioned chicken tagine ($15), which pairs another famous Moroccan dish, a stew often cooked in a clay vessel called a tagine, with the couscous. A plump bird is roasted with green olives, preserved lemons, and caramelized onions, producing a winning pungency with a citric edge.

Another spectacular couscous is mafrum, a recipe often attributed to Libya that features a hollowed-out potato filled with spicy ground beef. The chef further tosses rankly potato sticks on top of the spud to add crunch. I could eat this spectacular comfort food every day. Equally good is chraime ($19), a fish fillet in a limpid tomato sauce crowned with pepper. The dish is hot but not too hot.

In the second tier of desirable couscous at Kish-Kash, but still well worth ordering, stand tbecha (short rib, on one occasion a bit tough), chunky lamb (simultaneously chewy and tender), and Moroccan vegetables of the squash, carrot, and turnip sort, shotgunned with chickpeas. For once, the dish didn’t seem like a torture arranged for vegetarians, and I’d gladly order this again, especially considering the $12 price tag.

Speaking of vegetables, they totally rule the rest of the menu. There’s a great hummus ($9) flavored with chermoula, a green relish of chopped parsley and cilantro and presented with seeded challah bread, which arrives in a paper bag with the edges turned back. No cardboard pitas here. There’s also a cauliflower smothered in tahini, a brilliant salad featuring greens and sliced avocado in a lemony dressing, and deep fried eggplant.

Another charming aspect of the menu is the three sides, priced at $3 each: a crushed and brightly flavored orange squash, stewed tomatoes, and lemon-pickled vegetables. Individually or in concert, they add extra zing to your plate of couscous.

Several things make Kish-Kash particularly appealing. One is the couscous itself, rendered more perfectly than in any other New York establishment; I’ve only tasted couscous this good in Morocco. Second, the limited menu encourages you to zone in on your favorite version of the dish and make it your regular order. Alternately, if you happen to be there with a table of friends, it’s well within the realm of reason to order all the starters and all the sides to enjoy a sumptuous banquet.

And with its small size, cheery demeanor, commendable service, and relatively low prices (one can dine well for $25), Kish-Kash feels like a new type of restaurant, hopefully spawning imitators who strike a similar note with different cuisines. A Mexican restaurant concentrating on ceviche prepared with the precision of sushi, or a Chinese cocktail bar concentrating on Shanghai tapas? Well, why not? Let’s call it “slow casual.” 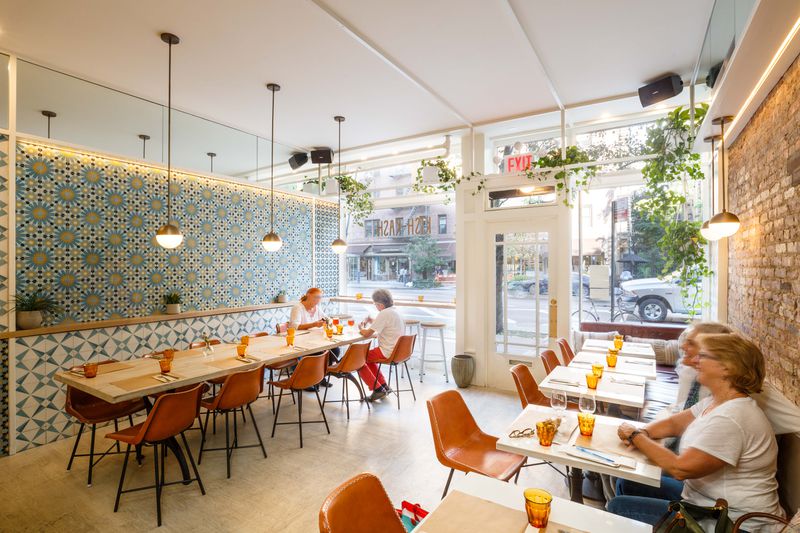 Cost: Dinner for two, including an app, two couscouses, two side dishes, and two glasses of mint tea, plus tax but not tip, $70

What to drink: Nothing is more refreshing than the mint iced tea ($5), but the house sangria ($12) of fresh peaches and rosewater is also a good choice. Apart from that, a short wine list, and a better selection of beer await your choice.

Bonus tip: One dessert is usually available. On a recent occasion, it was basbousa, a semolina cake with fresh berries. Share it with the table.