Otway Is a Model for Experimental Neighborhood Dining

Share All sharing options for: Otway Is a Model for Experimental Neighborhood Dining

Review and information for Otway

The realities of foie gras production, which involve force-feeding duck or geese, have prompted chefs to seek more humane alternatives, from self-engorging birds to blending chicken liver with butter. But what if the best way to mimic the taste of this classic luxury is to do away with death altogether?

During a recent meal at Otway, an envelope pusher of a restaurant in Clinton Hill, a server ferried over a dessert plate of yeast semifreddo, a healthy-sounding combination that recalled bean burgers or kale smoothies.

The kitchen makes an ice cream base out of cream and butter, blends in fresh yeast and dark, malty Vegemite, freezes the mixture in a disc-shaped mold, lets it partially thaw during dinner service, and tops it off with huckleberry puree and a rye cookie. The color is tan. The texture is denser than gelato. And the flavor is a dead ringer for foie gras. I asked the waiter whether there’s liver in the dessert. She shook her head. I continued eating, slowly, and then furiously.

The duo of yeasts imparts the product with a subtle minerality. And the huckleberry, laced with a whisper of verjus, kicks in the requisite sugars and acidity to keep everything balanced. The recipe is simple, almost mundane, but the alchemy that occurs somewhere in between emulsification and defrosting results in a transformation one might more closely associate with a Hogwarts spell than an act of normal gastronomy.

And if that still comes across as too avant-garde, Otway sells regular foie gras too.

The yeast semifreddo, like so much else at Otway, is not the product of a Silicon Valley fake-meat startup. It is not the combined effort of a culinary team with a deep background in avant-garde flavor combinations. The dish is a simple act of experimentation. Claire Welle, who creates the pastries, says she chose yeast as a flavoring agent because she wanted to “explore ingredients used for function and see if they could operate as flavor.”

Here it’s worth noting that Welle is essentially the head baker, as well as the executive chef, butcher, fromagere — she makes her own Hungarian liptauer — dishwasher, and occasional server. When I ask her about all these duties she says everyone in the kitchen shares responsibilities. She refers to herself as a “dirty line cook.” Her business partner, Samantha Safer, balances the books and bartends most nights.

Safer steers me toward the snails on a recent evening. They are deshelled, skewered, grilled, and served in a verdant pool of parsley coulis. The snails boast the texture of delicate clams; the coulis tames the saltiness. The dish also includes under-roasted sunchokes, which you can eat around.

Otway opened one year ago, born from the ashes of Tilda All Day, a venue that Safer and Welle ran with a third partner before a sticky breakup.

But on second glance, a more complex design scheme reveals itself. There’s the wallpaper, with all of its green, perpendicular zigzagging; the diagonal parquet paneling; the bartop that cuts back and forth like a hallway from Tim Burton’s Beetlejuice; and the partially tiled floor, unfinished like a game of minesweeper.

The physical space is an ode to elegant, and somewhat unexpected, angles, a rubric that jibes with Otway’s small plates, which subvert in powerful and surprising ways.

Fried chickpeas crack and crumble. Then they jolt the palate, first with a wallop of vinegar, then with the sweet musk of dry-aged beef fat, which coats them like a doughnut glaze. Kohlrabi, sliced thin and rolled up like rigatoni, is pleasantly tart. Pierce your fork further down. Hidden underneath is a puree of cured Bayonne pork and mayo, a modern riff on a 1970s ham salad.

Carpaccio, the paper-thin salad of the meat world, looks like any other. Now take a bite of the raw venison. The crimson flesh acts as a sublime delivery mechanism for subdued flavor of pine; Welle tells me she makes the oil from a juniper bush one of her cooks found in Sunset Park.

These bits of delicious whimsy make Otway, along with Olmsted and the dearly departed Gwynnett Street (where Welle worked), an important fixture in one of the city’s more sparsely populated restaurant categories: the experimental neighborhood spot. These are venues that don’t just push back against the safer gastronomy mainstream. They also promote, by virtue of their crowds, the notion that residential areas are teeming with diners who crave culinary creativity.

Helping this matter is the fact that every small plate at Otway is under $20. Even half a dozen oysters, easily $24 in some Manhattan venues, are just $12 here. And incidentally, there is nothing hifalutin or tricky about them. They’re just briny, perfectly shucked bivalves.

The first course at Otway is always bread, and it’s always free, a necessity that can smooth over the fact that it sometimes takes 10 minutes to get drinks and a cool half hour for snacks to arrive. The current offering is a naturally leavened miche loaf with a soft, sour, almost custardy crumb and a sturdy crust whose flavors recall burnt chocolate.

Otway also puts out a fluffy, butter-drenched rye to pair with the venison carpaccio and a denser, nuttier rye to balance out acidity of boquerones and fat of butter in her anchovy toast. Of course, one shouldn’t overlook the toasted miche that comes with the silky foie gras torchon; the chefs slick it with enough rendered duck fat to impart it with the unmistakable tang of dry-aged game. And since we’re being comprehensive, Welle, during brunch, also serves brioche with chocolate, dill biscuits, financiers, squash miso quick bread, coffee cakes, sticky maple buns, and an olive loaf.

Welle says she doesn’t consider herself a proper baker. I disagree. And while Otway’s selection isn’t quite as wide or technical as, say, High Street on Hudson, it ranks as one of the more satisfying new bread programs in the city.

Does the crepe count too? For most of last year Otway rolled it up and topped it with uni, a dish that’s been discontinued due to quality issues with the urchin. The current preparation involves folding the small crepe into the shape of a taco and stuffing it with a generous supply of cold, salty crab and bevy of herbs, from parsley to fennel. It is an improvement on 99 percent of the lobster rolls hawked in this town, and it costs just $13.

Otway uses its mains to counterbalance some of the edgier tendencies of the starters. There are just four entrees. I vouch for two of them; skip the run-of-the-mill hanger steak and the vegetable pot au feu, whose thin onion broth and competently cooked potatoes make it feel more like a side dish than a compelling composition in its own right.

Welle’s best meat course is a pitch-perfect duck breast, with cleanly rendered fat, crispy skin, and a clever wallop of clove to counteract the gentle gaminess of the bird. Stewed cranberries add tartness and color. Just as impressive is the dorade, its skin as crisped as a chicharon, with the flesh of the fish lying in a sweet, concentrated lobster sauce.

If the kitchen is offering its coconut pot de creme as a special, order it; a layer of passionfruit curd tames the sweet custard. Otherwise, the right move is the aforementioned yeast semifreddo. It’s a shame that restaurants like Otway only seem to come along once every few years or so; homegrown venues providing affordable, accessible inspiration will do a heck of a lot more to bring more folks into the dining world than, say, yet another fast-casual chain.

Our review of Otway 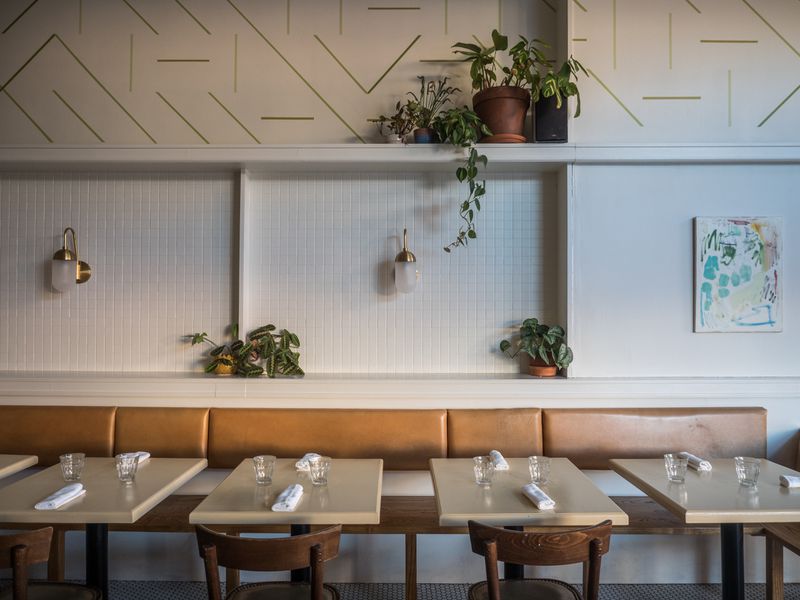 Bonus tip: Advance bookings available via Resy; the bar is open to walk-ins but fills up quickly.