The Lower East Side kaiseki spot packs in the extravagances, but little punch

Review and information for Uchu

Caviar is expensive. But it’s also easy. It doesn’t need to be deveined and pushed through a tamis like foie gras. It doesn’t benefit from a deft tableside shaving over wood-fired pizza like with truffles. The lightly-salted roe of a mature sturgeon simply needs to be opened like a can of sardines and consumed.

The most meaningful thing a chef typically does to caviar is mark it up. That’s not to say there’s no place for it in restaurants, but almost every high-end spot that’s wowed me with a composed caviar course has also gutted me with an experiment gone awry, often involving a modicum of fish eggs acting as an expensive form of salt.

Still, there are impressive exceptions. One of them is Uchu, a kaiseki spot on the Lower East Side with a penchant for, and perhaps overreliance on, classic luxuries like truffles and wagyu. About halfway through dinner, chef Samuel Clonts, late of Brooklyn Fare, steps behind the black walnut bar with enough osetra caviar to trade in for a Rolex. He takes a fat quenelle of roe, lies it atop a mound of vinegar-laced rice, wraps it in toasted nori, and hands it to you.

Osetra caviar nearly spills out of the completed hand roll.

The emerald green eggs shimmer under the soft lighting; they practically spill over the side like a dripping ice cream cone. The first bite or so is cool and clean, the essence of the ocean encapsulated into firm pearls. As you work down the roll, the roe becomes softer and oilier, the crisp nori and warm rice intensifying the briny notes.

The key here is balance. So many caviars can assault the palate with salt or fade into buttery nothingness. Clonts brilliantly chooses a variety that works well mid-meal. This is all the more impressive since the preparation contains a whopping 25-30 grams of roe, a portion that could easily command $150 as an individual dish. Here it comes part of a $200, service-included, twelve-course tasting.

If only the rest of the feast were as compelling.

Uchu, located just a block and a half south of Houston on a quiet stretch of Eldridge, houses two separate venues, serving two different menus. Operators generally employ these spilt-style restaurants to maximize accessibility. Danny Meyer perfected this style at The Modern and Gramercy Tavern, placing a more casual, a la carte room next to a fancier, set menu space. But at oligarch-inclined Uchu, the eight-seat kaiseki room actually is the more affordable spot. The front room features $300 tastings by Eiji Ichimura, a chef famous for stacking multiple slices of fatty toro on top of one another in a single piece of nigiri.

Owner Derek Feldman (who also runs Sushi on Jones), is clearly riding on the city’s prevailing luxury zeitgeist; the past two years have seen an unprecedented spate of new restaurants dedicated to Japanese cuisine in its most rarefied forms. These small, expensive, lit-for-Instagram venues represent a shift in the fine dining landscape, possibly reflecting a moneyed class who’d prefer a lighter style of gastronomy than what’s being served at the city’s European-American tasting palaces or haute steakhouses.

Even the sturdiest eater could only handle a gut-busting meal at Per Se every so often, but one could eat at Ginza Onodera, the obscenely expensive temple to raw fish, a few times a week and be none the worse off.

This review will focus on Uchu’s more creative kaiseki space. Assessing the technical nuances of high-end sushi spots, which largely serve similar products, can at times feel like comparing two $500 bottles of Burgundy; maybe one’s objectively better or maybe it’s just a matter of preference, but either way it’s a task that serves a narrower audience.

Also not to be discounted is the fact that Uchu sets itself apart from the larger kaiseki scene in that the setting is essentially a cocktail bar.

Dinner begins when a staffer in a double breasted suit brings over a drinkable amuse, an electric mix of barley sochu, elderflower syrup, yuzu, and Champagne. He pours it into a coupe so light the ounce and a half of liquid feels heavier than the glass itself.

Then the food starts appearing from the kitchen, which is odd because the point of sitting at a counter is to get a peek at the creative and technical process of cooking, watching as chefs contemplate micro-garnishes and turn hamachi fillets into translucent, abstract artwork through impossible knife work. At Uchu, caviar rolling and truffle shavings notwithstanding, diners spend most of the meal looking at a handsome brown wall of whisky bottles, and watching a guy behind the bar make cocktails. He likes to use infuse his drinks with smoke, creating a slightly sweet haze that recalls a nightclub or your buddy who vapes too much.

Clonts kicks off the meal with uni. Sometimes he places it in a glazed ceramic bowl above a layer of tofu and pumpkin — a study in soft textures from the land and sea. On another visit he might lay it above a dice of scallops — a striking contrast of orange urchin and black soy over a white dice of mollusks; it’s as if the mollusks are a bed of ice.

A server arrives with an ornamental jewel box. She removes the top and reveals a few slices of octopus in dashi, floating aside a branch of purple shiso flowers and a potato. The flavors are clean, neutral, and not particularly memorable; it’s the plating that’s more exciting, a high-end boutique’s evocation of a small tidal pool.

This is followed by a single bland bite of eel. Next the kitchen might send out a tempura-fried spanish prawn, the minerally flavors of the Mediterranean juxtaposed against a pool of a sauce of the crustacean’s own head — an elevated riff on katsu curry.

Or instead of the prawn, Clonts might send out a few forgettable slices of fried sweetbread. Inconsistency is an issue here.

And then there is the question of Uchu’s more traditional gourmet fare. In his Letters to a Young Chef, Daniel Boulud wrote that “clientele and imagination determine what ingredients you should buy...It does not all have to be truffles, caviar, and foie gras.” His comment was prescient in that it preceded a decade-plus movement of young chefs redefining and expanding the notion of luxury as we know it, from the faux-shark’s fin soup of Benu, to the lemongrass-flavored ants of Noma, to the green apple taffy helium balloons of Alinea, to the house-made mozzarella of Torrisi.

Clonts, by contrast, is the rare young chef to rely a bit more heavily on traditional extravagences. This should not necessarily surprise: Clonts spent five years at Brooklyn Fare, a French-Japanese spot famous for making those luxuries feel exciting again.

Some of those same indulgences don’t pack the same wow factor here. His caviar is outstanding, yes. And there’s no one in the city using golden trout roe the way he is; the chef lies it over a pile of barely set scrambled eggs, two shades of the color yellow, one rich and creamy the other shockingly briny. It’s perfect, until you try it another night and the eggs are overcooked and lack their compelling richness.

Or consider the staple meat course, a slice of dry-aged Miyazaki wagyu set between two slices of milk bread. It’s a riff on a dish that famously runs $180 in Tokyo. Here, the bread completely overwhelms the fattiness and seasonings of the beef. It tastes like any steak sandwich. Rice laced with foie gras, the final savory course, has little of the duck liver’s signature richness; the ingredient is more oily than flavorful. The black truffles atop, in turn, lack the earthy complexity they possess elsewhere.

The tasting winds down with mandarin sorbet and then a chocolate souffle. They’re both fine. Better are the petits fours — soy caramels whose sweetness are tempered by a stinging Brandy Alexander, a final mini-cocktail to bookend the dinner.

For a well-heeled clientele looking for classic, if not particularly inventive weeknight luxuries, this will do. But really, Uchu needs work.

Our review of Uchu 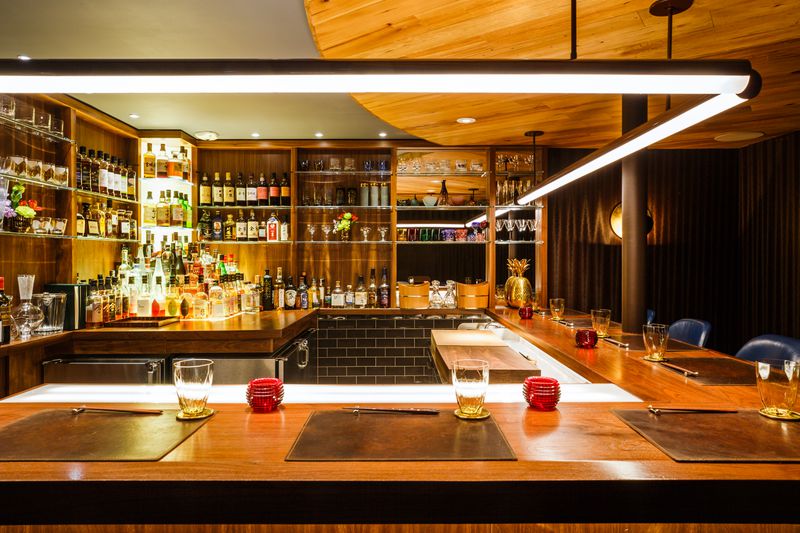 Price: $200 for the menu. Beverage pairings are $125; cocktails are $26. Japanese whisky flights available from $45-$195. All prices are service-included; there is no tipping at Uchu.

Bonus tip: Reservations aren’t terribly difficult to come by for parties of two; solo diners will encounter less availability, however, over the course of any given month (same goes for the $300 sushi bar).

Once Snoozy and Staid, French Restaurants Are Getting a New Act in NYC