I Sodi’s Brilliance Lies in Obsession Over Simple Pleasures

Share All sharing options for: I Sodi’s Brilliance Lies in Obsession Over Simple Pleasures

Review and information for I Sodi

It’s a shame, but not a surprise, that braised onion pasta has never achieved avocado toast-like fame. Slow cooked onions are a study in slouchiness, an ode to the texture of mush. Yes, two of the most prominent and indulgent riffs come from two of the world’s late, great food writers — Marcella Hazan, who recommends cooking the onions in lard, and James Beard, whose butter-laden recipe Food52 considers the “highest form of caramelized onions known to man.” And yet the dish is almost entirely absent New York’s Italian restaurants — almost.

I Sodi, a decade-old Tuscan restaurant in the West Village, corrects this allium oversight with a bit of elegant austerity.

The kitchen uses just three ingredients: red onions, salt, and a little bit of olive oil, cooking them down and tossing the sauce with house-made tagliatelle and parmesan. Anyone who finds the flavor of slow cooked onions to be a sugar substitute, take note: There is no lusciousness in I Sodi’s version, no taste of fat. Like a dry Amontillado sherry, the caramel color belies a lean, sharp flavor. The little gobs exude an earthiness so profound they recall the meatiness of a vegetarian chili.

Braised onions might not be the central reason this tiny spot commands a two hour wait on Fridays. But their grandeur certainly suggest what chef Rita Sodi can do with very little.

Sodi, a fashion industry vet who was raised on a farm north of Florence, opened her namesake restaurant in 2008. She had no formal training as a chef. I thought her best dish, in the earliest days, was the negroni.

The venue quickly cultivated a loyal neighborhood following, and I heard the food improved over the years, though Sodi didn’t receive a serious level of critical attention until 2014, when she opened the excellent Via Carota nearby, a larger, more boisterous, pan-regional, Italian spot with chef Jody Williams.

The two chefs have morphed into bona fide (but small time) empire builders; they’ll soon open Pisellino, a small cafe that will sell cute little tramezzini. But before the media coverage over that spot starts to build, it’s worth throwing the following into the mix: I Sodi, quieter and more compact than Via Carota, has transformed itself into one of the city’s finest Italian spots, a love letter to Tuscany whose pure product obsessions can make it feel as focused as some of the wildly expensive sushi spots popping up around town.

The room, in January, smells heavily of the black truffles that are native to Sodi’s homeland. She lets them rain over pappardelle for $39 (compared with $65 at Babbo). And she shaves them over grilled sourdough slicked with honey and draped in lard, the sweet fat just warm enough to release the mossy overtones of the fungi. A cynic would dismiss this as found food, as an easily assembled luxury; I’d respectfully counter that Sodi’s brilliance is taking this trinity of powerful Tuscan flavors — charcuterie, bread, and truffles — and forging a precarious balance among them through the primitive power of fire.

Sodi, who’s sometimes overly humble about the power of her own cooking, would likely scoff at that description. “It’s just food. It’s just enjoyable food,” she told The New York Times in 2014. “That’s it. You put it on the table, you talk and you eat.”

There is, at first glance, a certain incongruity about the cooking of Tuscany, an expression of bountiful produce and game meats. There’s something paradoxical about how the birthplace of the Italian Renaissance, how the home of poets like Dante and polymaths like Da Vinci, how the land of the breathtakingly complex Brunello di Montalcino, a wine that can age for half a century or more, is also where the cooking somewhat fastidiously leans toward the simple and straightforward. But it doesn’t take long to realize that the cooking is far from simplistic.

“Tuscan food tastes like itself,” writes the famed memoirist Frances Mayes. “Ingredients are left to shine, not combined with a list as long as your arm or tortured into odd combinations.”

I mention this because in an era when phrases like “rustic” and “comfort” in New York restaurants can feel like a code for safe and boring, and in an era where Italian fare of any variety can feel more like a “sure thing” business decision than a culinary one, it would be easy to look at I Sodi’s menu and write it off as plain or pandering. Look, another appetizer of grilled vegetables.

Well, try those vegetables, especially if they’re porcinis. Sodi gently burnishes the fungi, leaving the caps soft and squishy, while the stalks remain firmer. Some bites burst with a straightforward nuttiness. Others begin a touch watery, then echo faintly of wood and pine. I thought about these complexities over I Sodi’s giant plate of porcini, for which I paid $23. And then I thought about a one-note version I sampled at a Japanese spot where dinner ran $500 for two.

Sodi fries her artichoke hearts without batter; she serves them with neither aioli for dipping nor lemon for squeezing. A waiter simply places a white bowl of salted hearts on the bartop, and you eat them as if they were unevenly cut potato chips, crispy and copper-colored at the edges, plump and soft near the fatter side.

The restaurant’s recipe for steak tartare doesn’t contain cheddar or sunchokes like the more experimental versions at Wildair or Estela. And yet the flavor is as revelatory as any of its modern analogues; the cool meat, hand chopped just larger than risotto grains, shimmers in its dressing of anchovy oil. Raw onions lend a whisper of sweetness at first, and then a delicate irony funk lingers — until a forkful of arugula washes the palate clean. If there’s a better traditional tartare in the city, I don’t know of it.

I Sodi is small. It’s a single room of a restaurant, accessible just behind a barn house-style sliding wood door; the only thing that doesn’t feel genuinely Italian is a Dyson space heater in the foyer. There are three tables up front, five along the wall, a sixteen seat marble bar opposite them, and and airplane-style aisle in between; a beverage cart passing through would surely elicit bumps and bruises. And yet somehow the entire space has always felt comfortable. Perhaps it’s the leather-softened bar stools. Perhaps it’s the sound-absorbing tablecloths. Perhaps it’s even that sliding doors, which is so silent that new patrons don’t seem to physically enter as conjure themselves.

The closest thing to an art installation is the rack of amari and digestivi that stretches half the length of the bar. You might need one or two during the meal — a shot of rose-scented Montenegro, a dose of rhubarb-laced Sibona — as pastas are portioned like mains while the actual mains can easily feed two. That’s not a bad deal considering that virtually every pasta, save truffles or the lasagna, tops out at $21.

That caramelized onion masterpiece is the right move for a shared mid-course. So is cacio e pepe, a preparation whose ubiquity seems to be approaching hamburger levels in pasta-focused restaurants. I Sodi’s stands out from the crowd by using a snappy dried spaghetti over the softer tonnarelli used elsewhere — and by using a strong dose of pepper, letting the sting of the capscium act as a proper counterweight to the rich pecorino.

Skip the sinewy, pancetta-wrapped rabbit. A better call is the giant, obscenely juicy cornish hen roast under a brick, or the slowly-braised wagyu brisket, a soft mound of concentrated beefiness over a smear of buckwheat polenta. Sodi cooks the grains in nothing but water — there’s no butter or cream — ensuring that the starch, normally a digestive evening ender, acts a light and nimble foil to the beef.

Whatever fat the polenta and caramelized onions lack, the desserts make up for, from the fior di latte gelato drenched in walnut liqueur (a kind of boozy affogato), to the graham cracker-studded chocolate ganache “salami” (imagine a more elegant cookie dough), to the tiramisu so dense with mascarpone it could qualify as a cheese course for two. All the more reason for another shot of Montenegro. Or Ramazzotti. Or Branca Menta. It’s all enough to make you realize that Sodi, along with Williams, have essentially, and perhaps unexpectedly, risen to the top of New York’s downtown Italian scene.

Our review of I Sodi 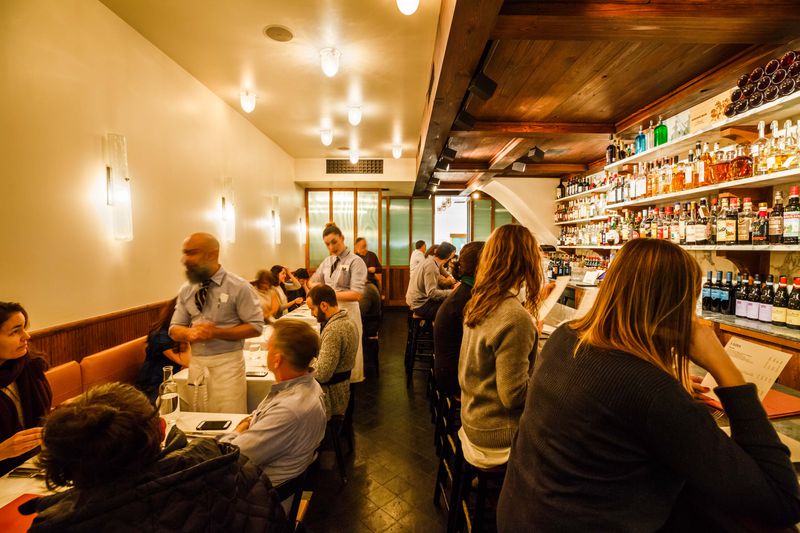 Bonus tip: All bar seats are first come, first-serve; tables book up weeks out via Resy. Walk-ins can sometimes wait two hours or more during prime weekend hours; try the larger Via Carota for a slightly shorter wait.