The Bay Ridge restaurant does not disappoint

Review and information for Le Sajj

You could spend a week eating nothing but kibbeh at Le Sajj. This Brooklyn stalwart — open 11 years — is an anchor of the neighborhood’s Lebanese community, providing a bit of Beirut in Bay Ridge. In the evenings, the front of the restaurant swings open to ocean breezes. Local residents promenade outside or relax on benches provided on every block, as the sun sinks over the Verrazano-Narrows Bridge.

Inside, one wall displays an antique carved sideboard decorated with beveled mirrors and Tiffany lampshades — this unusual bit of baroque furniture is supplemented by pictures of Beirut, including one of women making the paper-thin pitas that are one of the cuisine’s signatures. A small bar occupies a niche at the rear. Next to it stands a communal table favored by customers who take puffs on a hookah between bites.

At Le Sajj, kibbe takes several fundamental forms. One is an orb-shaped fritter with a cracked wheat crust ($7) stuffed with ground beef, onions, and pine nuts. A vegetarian version features a submarine-shaped shell of pumpkin filled with spinach and chickpeas. Less common is the pie form of kibbe ($17) — the same meat mixture with a coffee-colored crust, from which wedges are cut and the aroma of cinnamon rises.

Three other variations on raw beef ($12 each) include habrah nayeh, the most interesting option, showcasing beef smashed into a paste, and planted with a sprig of mint. Coarse ground and mixed with bulgur, kibbe nayeh is the classic, while kafta nayeh is a simple version of onion-laced ground beef. All three can be sampled for $34.

To the outsider, the lure of Le Sajj’s lengthy menu is not to re-experience the greatest hits of Lebanese cuisine, but to explore its many hidden treasures. There’s a wonderful shish barak, a good honest bowl of meat-stuffed dumplings, something like Turkish manti only smaller and firmer. The dumplings rest in a yogurt sauce that sends them into creamy orbit. Roast baby lamb is another gem, though the name is misleading: The entree consists of pulled lamb leg shaped like a fez and topped with pine nuts in a light gravy. It proves a definition of ovine mellowness.

Little half-moon pies, sambusik are stuffed with shallot-laced lamb with a lovely braided spine, while fattoush is a green salad dressed with lemon juice and sharp olive oil, topped with fried pita fragments that give the salad lightness and crunch. Perhaps best of all is hommos Beiruty ($7.50), which rhymes with tutti frutti. While good hummus with diverse toppings has become commonplace at establishments like Dizengoff, this spectacular version mixes in minced vegetables and pickles to produce a hybrid salad and dip — with a flavor that owes something to buttery mashed potatoes.

If the eggplant special is available — grab it. The rice-filled vegetable arrives with warm grape leaves on the side, which are a treat in themselves. The menu’s regular offering of stuffed zucchini can be substituted, but isn’t quite as scrumptious. A potato casserole called Lebanese shepherd’s pie is also worth seeking out.

Yes, the standards are available, too, including foul mdamas (pronounced “fool”), spinach pies, and a range of flame-grilled kebabs. The lamb chops are small and delicate, with the extra flavor we’ve come to expect from halal lamb, but why not go for all of the kebabs on the Sajj combination deluxe ($34)? It grandly presents two chops, marinated chicken, kafta (little hamburger patties), and a shish kebab on a king-size bed of nicely oiled rice. Alongside come charred yellow peppers and tomatoes, a bowl of the mouth-singeing garlic dip called toum, and — here’s the kicker — one of the restaurant’s paper-thin pitas softened with tomato sauce and heaped with parsley and onions.

Do with that pita what you will — the platter makes an excellent full-course meal for two. Then finish up your glasses of wine and take a stroll on Bay Ridge’s welcoming sidewalks.

Our review of Le Sajj 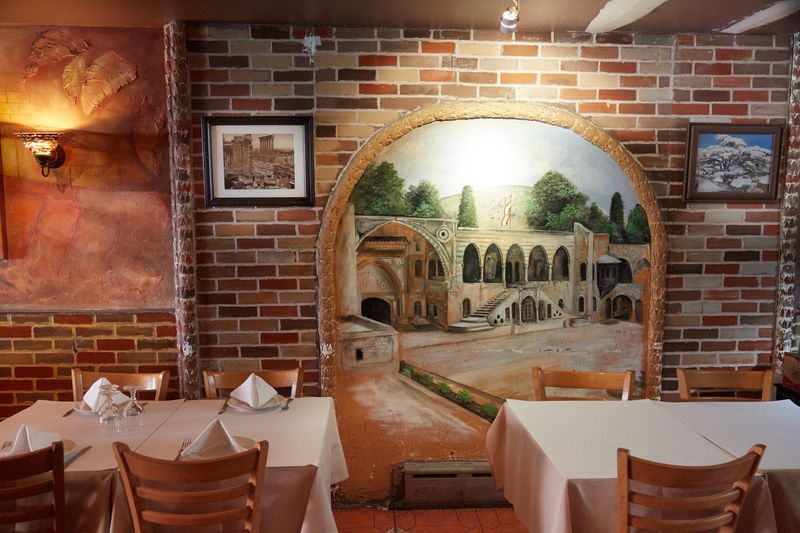 Cost: Dinner for two, including two apps, two entrees, and two glasses of wine or beer, plus tax but not tip, $80.

What to Drink: The restaurant is working on its wine list, as the proprietor pointed out. Currently, there are several reds and whites of interest from Lebanon’s Bekaa Valley, priced around $9 per glass, $40 per bottle.

Bonus Tip: To avoid the scent of the hookah, but also to enjoy the maritime breezes, pick a table in the front of the restaurant. On the other hand, maybe you want to be one of those puffers…