Travel to Ditmas Park for This Thai Newcomer

An open kitchen and bold flavors at Corthaiyou

Share All sharing options for: Travel to Ditmas Park for This Thai Newcomer

Review and information for CorTHAIyou.

A new hotspot is developing in Ditmas Park, a region of stately Victorian homes south of Prospect Park in the heart of Brooklyn. There are currently four Thai restaurants in the neighborhood, though that number will hopefully grow. In general, the menus are more adventuresome than the neighborhood Thai carryouts found all over Brooklyn, with a focus on premium ingredients. This has resulted in unique take on the cuisine in the city, and worth traveling for, especially if you choose dishes carefully.

Newcomer Corthaiyou is one of those worth visiting (Mondayoff is another), making punning reference to Cortelyou Road, the location of the restaurant. The restaurant looks like a hut out front, with an inside clad floor-to-ceiling in light-toned woods. There are niches for objets d’art, while a bustling open kitchen dominates the rear of the dining room.

Jintana Kumsiri is the chef, nicknamed “Nid.” She hails from Khon Kaen, a city in the center of the Isan region famous for its night-food market. Indeed, a blurb on the menu cites Kumsiri’s experience working with her mother and grandmother in their street-food enterprises.

Street food would be an exceedingly good place to start your meal at Corthaiyou. The classic deep-fried tofu with a sweet and fishy dipping sauce (tow hoo tod, $6) is dependable, and so are the perfect curry puffs bulging with chicken and potatoes, three to an order, which remind me of the European influences on Thai cuisine. But why not go for the kor moo yang ($10), an app of grilled pork neck served with a tart pool of lime and tamarind?

Salads make great starters, too, especially the laab moo, which features a heap of spicy ground pork laced with fish sauce and accompanied by raw vegetables for scooping and wrapping. This is one Thai restaurant that doesn’t stint on the fish sauce. Though the standard som tum (papaya salad) proved righteously spicy, a pair of interesting variations listed on the menu were unavailable on my visits — one incorporating salted egg and the other poo naa (field crab), creatures that live in the rice paddies that are relished for their pungent flavor.

Another street food favorite of Isan is gai yang, a simple grilled chicken. The version at Corthaiyou ($15) is voluminous and tender, though it lacks a crisp skin. The dipping sauces — one dark and herbal, the other orange and sweet — help the dish along, and the platter comes with a bonus serving of papaya salad, which is a nice shareable entrée. Though the prices might be a couple dollars more than the city’s usual neighborhood Thais, the portions are often huge.

The standard Massaman curry ($18) — sporting a lively red broth hiding some creamy potatoes in its depths — is made with boneless short ribs rather than usual tough stew beef. Corthaiyou’s version is spicier than most; massaman curry is usually mellow.

At many new upscale Thai restaurants, menus no longer list multiple proteins for each stir-fry and curry, but make some welcome choices: The red curry presented here with loads of fluffy crab meat is the restaurant’s tastiest dish, while green curry — one of the menu’s hottest — incorporates chicken exclusively. So does the gingery, sauce-less Panang curry.

Among noodle options, stars of the show here are kwei thuw ped ($14), a simple soup of sliced fatty duck breast in a dark sweet broth, and the Chiang Mai classic khao soi, a coconut-milk concoction sporting a whole chicken leg. Soft egg noodles lurk below the surface as well as fried noodles on top, making one of the city’s most interesting soups. Really, can anything be better than two types of noodles in a single dish? 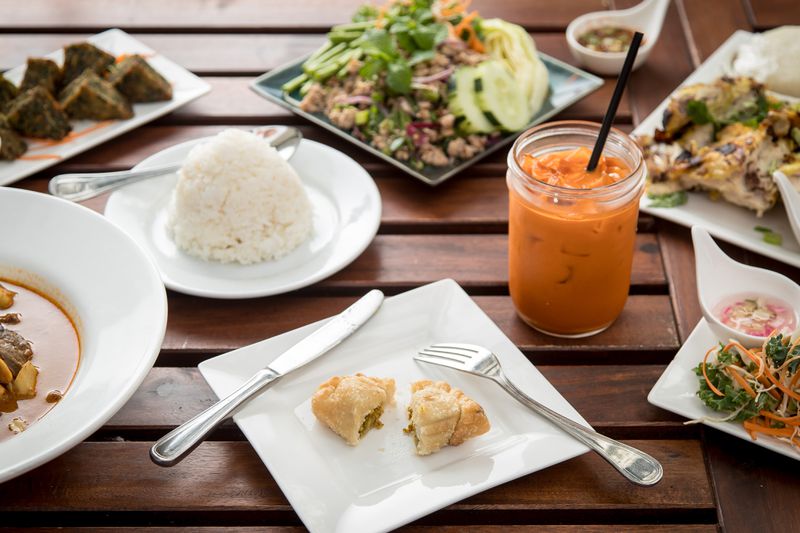 Cost: Dinner for two, including two apps, two entrees, and two glasses of wine or beer, plus tax but not tip, $70.

What to Drink: A spectacular homemade lemongrass beverage is available, as is a modest list of four white wines, three red, and four beers. Most recommended is a sauvignon blanc from Chile (glass $8, bottle $30).

Bonus Tip: One of the best features of Corthaiyou is its lavish use of fish sauce, so if you don’t like fishy flavors (or are a strict vegetarian), this is not the restaurant for you.