Mixian Noodles Get the Three-Star Treatment at Chinatown's Deng Ji

Yunnanese restaurants are on the rise

Share All sharing options for: Mixian Noodles Get the Three-Star Treatment at Chinatown's Deng Ji

Review and information for Deng Ji

In an area thronged with Fujianese restaurants in the shadow of the Manhattan Bridge, an outlier from Yunnan, Deng Ji has opened on Division Street. Inside a narrow storefront that’s easy to miss, the dining room seats 35, with wainscot-accented walls and drawings of life in the Southern Chinese province.

Deng Ji is one of the first places in Manhattan’s Chinatown to offer mixian, and it does so in a more traditional fashion than the freewheeling, East Village mixian spot called Little Tong. Originating in Yunnan, mixian is a type of rice noodle that’s strikingly white and slender like spaghetti. Try to pick them up with chopsticks and they may fall away before reaching your mouth, since the noodles are mega-slippery.

Served as communal hot pots, the most famous mixian order is called crossing the bridge noodles, named for the story featuring a grumpy scholar on an island, a bridge, and an inventive spouse who looks for a way to get his noodles to him hot. Hint: it involves an early version of tableside preparation.

At Deng Ji, look for noodles in the Guo Qiao (“bridge”) section of the menu. One selection called the classic ($21.99) most resembles the dish in the Chinese fable. Though it’s listed as dinner for two, it easily feeds three.

As a server carries soup to the table the opaque white broth laps against the sides of the bowl. According to the traditional recipe, it has been made by boiling chicken, bones and all for six hours, resulting in a creamy emulsification. Ingredients bob within the soup, including shrimp balls, baby bok choi, Spam, enoki mushrooms, shredded chicken, crisp tidbits of fried pig skin, and fingers of fish paste that do an astonishing imitation of gefilte fish.

Man, this soup is great! There are a dozen versions of it, including the most expensive one called happy ending ($42.99), which includes extra seafood like shrimp and crab stick. A separate menu section lists $2 to $5 additions like king trumpet mushrooms, geoduck, sea cucumber, and dried bean curd.

Two versions of mixian, scallion pancakes, a menu that listing of “amazing chicken” (shredded chicken with chiles), cucumbers, and more.

I’d also recommend the hot and sour rice noodles ($6.75), a bowl shot with pickled green chiles, chunks of beef, and scallions, while a miasma of chile oil spreads across the top of the bowl like an oil slick on calm waters. There’s also mixian version of chicken chow fun — a take on that old Chinese-American fave that doesn’t quite work.

Don’t forget about the apps, a collection of small dishes ($3 to $5) found in nearly every modern Chinese restaurant in town, whether the food originates in Sichuan, Henan, or Dongbei. But here, they’re so good they should not be ignored, from the crushed cukes gobbed with garlic to the beef tendon shaved thin in chile oil. Steamed edamame is a tip of the hat to the Japanese, but the favorite is the “dress old preserved egg” of the black, translucent, thousand-year-old variety, roughly mashed with green chiles and sesame oil and served warm. You’d be hard pressed to find a better starter at any price.

Our review of Deng Ji 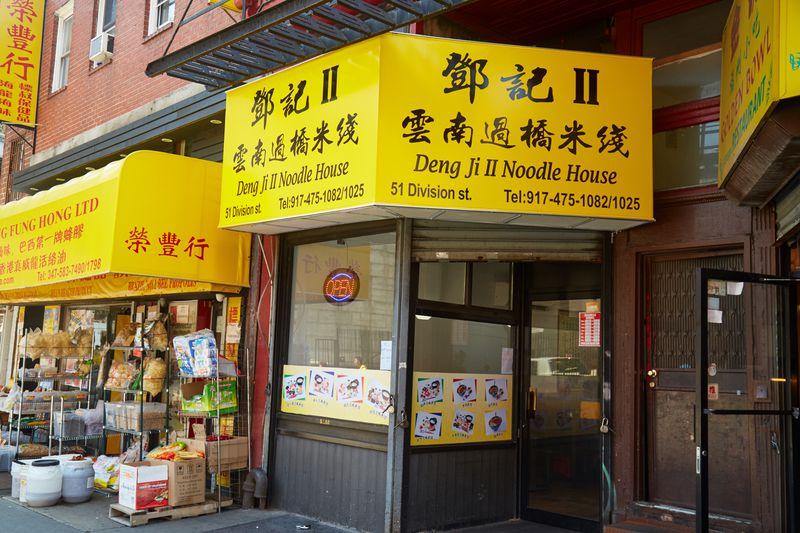 Cost: Dinner for two, including one app and a shared version of crossing the bridge noodles, plus tax but not tip, $25

What to Drink: Cold tea is provided with a meal, gratis. There’s not much else apart from Chinese sodas.

Bonus Tips: While crossing the bridge noodles are generally mellow and mild, several bottled condiments stand at the ready to spice it up. The most fascinating is designated “zanthoxylum oil” on the bottle, which imparts an unusual tingle to the tongue, lips, and throat.