A Rare Taste of Indian Beef in Eastern Queens

Share All sharing options for: A Rare Taste of Indian Beef in Eastern Queens

Review and information for Taste of Cochin

For much of the 20th century, we New Yorkers have contented ourselves with Punjabi, Bengali, and Gujarati fare, feasting on brown-sauced curries, tandoori chicken, and a wealth of colorful vegetarian dishes. But the last decade has brought the ascendance of South Indian food and the opening of dozens of new dosa places, as well as restaurants devoted in whole or in part to the cuisines of Chennai and Hyderabad, for example.

But it’s in Eastern Queens right on Union Turnpike where you’ll find a less common cuisine represented at Taste of Cochin, serving dishes from the palm-shaded state of Kerala on India’s rainy southwestern coast. For centuries a center of the international spice trade visited by Arab, Chinese, Portuguese, Dutch, and English mariners, Kerala has historically harbored Islamic, Jewish, and Christian communities, each with its own dietary preferences and restrictions. The cuisine showcases seafood, palm products, curry leaves, coconuts, black mustard seed, black peppercorns, and beef — the latter an ingredient rarely seen elsewhere in India due to the cow’s sacred nature to many Hindus.

Flanked by a full bar, the dining room is big and boxy, with dark red walls and draperies that lend a somber vibe. A buffet so long it runs along two walls packs the place on weekend afternoons ($10.95), where diners shovel some very good food from several regions of India onto their plates, though only about a quarter of the buffet’s 25 dishes hail from South India.

Defect from the buffet and even the bound menu, and seek out the paper menu found in a stack by the front door. Listed under Kerala Specialties, you’ll find regional dishes like fish moilly ($12.95), with chunks of firm white fish populating a gravy thickened with coconut milk and colored an eye-searing yellow by turmeric. Whole green chiles and curry leaves enrich the flavor, with the occasional carrot thrown in for sweetness and color.

Bring friends to try several dishes from this regional section of the menu, where fish dishes abound: In addition to that fish moilly, there’s Malabar fish curry ($13.95) made with rich and oily kingfish immersed in a sauce made with a toasted spice mixture and a dab of tomato sauce, which turns it a lovely shade of burnt orange. (That same kingfish is available coated with spices, breaded, and fried like fish and chips.)

Also associated with the coastal region is a multilayered bread called Malabar paratha ($1.50), which the host will urge on you if you neglect to order it. Thank him, because the flaky flatbread is perfect for mopping up sauces.

Don’t miss the beef dishes on the Keralan menu, many of which are the subject of yearly festivals in Kochi, the modern-day name for the city of Cochin. Beef ularthiyathu ($12.95) features a sauceless dice of tender meat that’s mildly spiced so the flavor of the beef shines. Goat is another focus on the menu, but you’ll have to go to the Goat and Lamb Entrees section to dig out “goat masala (Cochin style)” and goat vindaloo, representing two spicy renditions of the meat. The latter is associated with Goa, a former Portuguese colony (now a beach resort).

Great vegetarian dishes abound in Kerala, including aviyal ($8.95), a sea-green curry of chayote and long beans awash in coconut milk; and theeyal, a fragrant vegetable soup flavored with fenugreek, tamarind, and toasted coconut. Taste of Cochin offers a handful of dosas, too, but these vegetarian crepes are better at restaurants that specialize in them, such as the nearby Hillside Dosa Hutt.

Perhaps the most surprising ingredient found in Keralan cooking here is duck. And maybe the proximity of the restaurant to sources of Long Island’s famed duck is why the waterfowl is so good at Taste of Cochin. Dip your Malabar paratha into the thick, dark sauce of duck curry ($14.95) and know gastronomic heaven, borne of a culinary culture rich in herbs, spices, and coconut milk.

Our review of Taste of Cochin 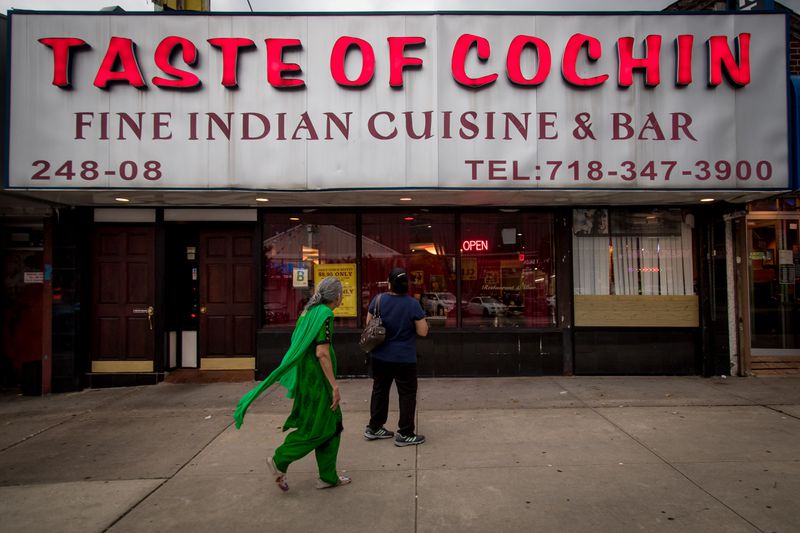 Cost: Dinner for two with one appetizer, one bread, and two main dishes, washed down with lassi or beer, with tax but not tip, $45

What to drink: Indian beer and mango or salt lassis are your principal choices, though mixed drinks are also available at the full bar

Bonus tips: Even during afternoon buffet times, one is allowed to order from either of the printed menus (though the buffet, more Punjabi than Keralan, is a damn good deal).