Review and information for Empellon

Near a tony corner of Midtown Manhattan, a Thomas Pink store fits bankers for $400 cotton shirts, a Tourneau shop hawks watches that could pay off your student loans, and a restaurant called Empellon makes some of the city’s finest tacos for $6.

They are not, I should warn you, conventional tacos: They are ice cream tacos, a narrow class of vaguely Mexican and distinctively American junk food that more closely recalls a frostbitten box at a suburban grocer than a good restaurant in a gilded part of town.

They are just as compelling as an expert rendition of al pastor.

Chef Alex Stupak, who runs more casual Empellon siblings in the East and West Village, makes a thin masa batter, presses it into one of those old-fashioned waffle cone irons, and folds it into the shape of a shell. He then fills it with corn ice cream, tops it off with masa crema, and sprinkles it with freeze-dried corn streusel.

Take a bite. The “tortilla” recalls sweetened breakfast cereal, while the dairy filling zaps the palate with a restrained saltiness, a mellowed fattiness, and uninhibited vegetal punch. If the Choco Taco is essentially a riff on a flying saucer, the Stupak ice cream taco is an ode to maize in all its processed glory: pure American gold.

Empellon also serves regular tacos. They are not good tacos.

The Stupak ice cream taco is an ode to maize in all its processed glory: pure American gold.

There is a single rule for eating at Empellon, Stupak’s first Midtown restaurant: Order dessert, at least two per person, or three if you’re alone, because Stupak, the longtime pastry chef at Alinea and WD~50, is putting out some of the city’s best sweets at fair prices in a cavernous bi-level space that could double as a Dos Caminos if things don’t work out.

Restaurants that sell apricot margaritas don’t typically serve desserts on par with Le Bernardin, and Mexican spots in finance-bro territory don’t typically court diners with strawberries seven ways (listed as Strawberries for the Table). Stupak churns them into a sorbet as a filling for tiny black sesame ice cylinders, pairs them with graham cracker and whey ice cream, fills them with almond gelee, powders them and sprinkles the dust over marshmallows, presents them au naturel, stuffs them with fake stems made of shiso, and finally, transforms them into white chocolate bonbons bursting with freeze dried fruit: It’s just a touch fancier than the foil-wrapped supermarket variety.

Which one should I order? “You get all of them,” a waiter informs me. The cost is $7 per person, which is about a buck or two more than a plastic container of underripe strawberries from a gourmet market.

I don’t devote a whole lot of time to desserts in my reviews for the same reason that I don’t normally cover restaurant cocktails: They are predictable, uninspired, and too sugary. When I want something truly creative, I go to an ambitious patisserie like Dominique Ansel Kitchen.

Amid this era of sky-high labor costs and rents, contemporary restaurant sweets aren’t so much a product of a chef’s vision as they are an act of deference to the European-American tradition or a kowtow to the imagined childhoods of their customers. They are safe bets. They are normcore riffs on cookies, cakes, shakes, crostatas, tarts, pies, panna cotta, and soft serve. The composed, imaginative dessert plate in 2017 takes a back seat to a $35 sundae for two.

Or as Stupak writes via email: “I think desserts are getting really fucking lazy these days and it’s depressing me.”

Know what depresses me? Ordering avocado for dessert. Especially one that’s been Instagrammed as many times as the “avocado” at Empellon. At first glance, it looks like nothing more than a halved fruit over salt. It appears as if Stupak and his pastry chef Justin Binnie have given up and finally joined the club of chefs who insist on charging $14 for superfoods with little manipulation.

“It’s not a real avocado,” says the server. He’s right: It’s a parfait in disguise, blended with the namesake fruit for richness, and spray painted with an edible black exterior. The flesh is as soft as a ripe avocado, but the flavor is closer to key lime pie. The salt turns out to be a tart, citrus-y ice, and beneath it all is a smear of eucalyptus yogurt, a refreshing middle finger to the spa food this all mimics.

Simply put, the dessert is a five-year-old’s dream of what an avocado might taste like, before actually biting into one and realizing it’s oily, fatty, and overrated. The Stupak avocado is pastry as escapism. And it’s delicious.

The late Michel Richard used to call this type of trickery trompe bouche (a play on trompe l’oeil), wherein the creation on the plate appears to be something entirely different until the ingredients hit the tongue. A classic example is WD~50’s old sunny side-up egg, in which the yolk was carrot juice and the white was firmed-up coconut. This whimsical ethos, combined with the chef’s limitless imagination, is part of what makes Empellon feel so vital. Stupak is pursuing a grown-up’s version of that childhood wonderment: He’s making diners experience something new and surprising all over again.

This whimsical ethos, combined with the chef’s limitless imagination, is part of what makes Empellon feel so vital.

Empellon dices pineapple into tiny cubes, slowly roasts it with brown sugar, gels them, and uses cookie cutters to cut slices into the shape of pineapple rings. The product mimics the softness of a canned Dole product but, thanks to careful cooking as well as gobs of brown sugar and chamomile ice cream, it evokes a futuristic tea I didn’t know I wanted.

Here’s another sleight of hand: Stupak molds banana into the shape of a butter stick and places it over a seemingly inedible stone. The ice cream boasts the faintly sour taste of a barely underripe fruit. Your fork then slices into the faux-rock –– really an ash-dusted cajeta —that yields a richer, more complex banana flavor. This is impressive because the sweetened goat's milk, alas, contains no banana: It’s infused with jasmine oil, a volatile perfume that mimics the flavor of the fruit. Never has a caramel sundae achieved such avant-garde heights.

A trio of mini-concha arrive with the check; it’s enough to make you wonder whether things are finally getting more traditionally Mexican. Then you crack one open and realize the classically bready pastry has been transformed into an airy gougere filled with passionfruit cream.

"Life is too short for platonic love affairs and savory desserts," Josh Ozersky once wrote. Empellon’s dessert masterpieces made me think of an analogous bromide: Life’s too short to leave dessert until after dinner. If it’s acceptable to place saccharine foie gras preparations on the list of appetizers, why can’t a fake avocado with the masterful balance of a German Riesling hold the same importance as main courses?

Or rather, why the heck is a boundary-pusher like Stupak hiding his best offerings on a separate menu that most folks won’t interact with until they’re full? Well, probably because our society, eternally enraptured with sugar and sometimes willing to line up around the block for the city's best sweets, still undervalues dessert.

Our review of Empellon 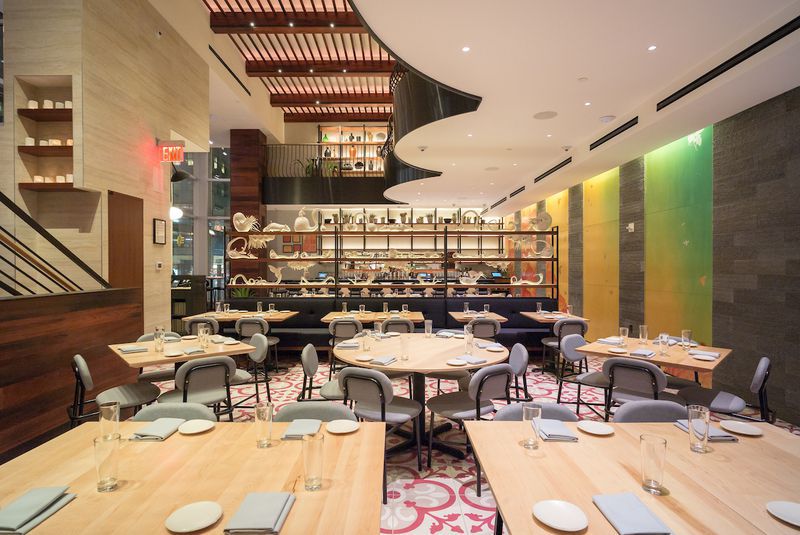 Bonus tip: Ideal meal for a solo diner is strawberries to start, a plated dessert to follow, and an ice cream taco or canela ice cream sandwich to finish. Ask the kitchen to course it out; otherwise all desserts will come out at once.