Share All sharing options for: Three Stars for Gumbo Bros. in Brooklyn

Review and information for Gumbo Bros.

Cajun/Creole restaurant, Gumbo Bros. on Atlantic Avenue in Brooklyn is a tiny place with a limited menu, which nowadays is a good idea. The décor channels the French Quarter. Faux gas lamps flank a pair of wooden shutters, the tables are made from bowling-alley wood, and the room is painted scarlet. For folks who like to look at things while they eat, there are antique maps, historic street scenes, football helmets, an engraving of Napoleon, and a record sleeve from the late Cajun comedian and cook Justin Wilson, who once published a recipe for a potato salad made with soda crackers.

A quick note on regional American fare in NYC

New York City has had great luck reproducing many of the world’s cuisines. We now have vast portfolios of restaurants representing Chinese, Indian, and Italian regional cooking, but when it comes to regional American, New York is notably deficient. Sure, there was a fervor for Southwestern in the 80s, and after decades of trying we finally have great Texas barbecues. But our take on the amazing Creole and Cajun cuisine of New Orleans and vicinity has always been disappointing, ever since Paul Prudhomme established a failed outpost of K-Paul’s in SoHo over 25 years ago.

But that may be changing. Bushwick’s Tchoup Shop offers wonderful Cajun snacks like boudin balls and okra-thickened duck gumbo in the honkytonk barroom setting of Heavy Woods. More recently, Sugar Freak opened in Astoria, a vast brunch mill that seemed all about beer and mixed drinks. How could the food be good? Well it is, with a stunning oyster po’ boy, as well as such classics as jambalaya, fried catfish, and crawfish etouffee.

Apart from sides and snacks, the bill of fare at Gumbo Bros. consists exclusively of po’ boy sandwiches and gumbos. These gumbos are not the okra-thickened ones. Instead the three on the menu are thickened with a dark roux — an amalgam of fat and flour that must be slow cooked in a skillet to achieve the desired shade of brownness.

The sausage and chicken version (cup $6.50, bowl $12) is the best, sprinkled with chopped green onions with a heap of rice at its center. The sausage is fiery andouille, the chicken in shreds, and the flavor every bit as strong as the chicken and sausage gumbos I recently slurped in southeastern Texas and Louisiana. But the rendition called Nanny’s seafood gumbo proves mildly disappointing, deploying the tiniest of shrimp and little of the advertised blue crab.

The third one I tried, a vegetarian version called gumbo z’herbs, was much better. The recipe was traditionally associated with Good Friday, when no meat, chicken, or fish could be consumed by the religiously observant. Fresh herbs and greens deliver the brilliant color and the effect is winningly pungent.

The po’ boys are equally delectable, starting with somewhat squishy white-bread rolls, which are just like those encountered in the Big Easy. Crustier rolls wouldn’t work with a po’ boy because the fillings would shoot out the sides. The sad news is that there’s no oyster po’ boy available, but the owners — two LSU grads — deserve credit for that: They don’t have the wherewithal to keep fresh oysters and shuck ‘em on demand, so they skip the oyster po’ boy entirely.

Instead the flagship of the pirogue po’ boy fleet is roast beef ($12), made with a Black Angus chuck long braised and sluiced with a funky sauce known as “debris gravy.” This is a real New Orleans thing consisting of pan drippings and scrapings; one bite will make you fall in love with the sandwich. The same gravy is available over rice for $4. If you miss the oyster po’ boy, the catfish po’ boy is every bit as memorable, made with several filets freshly fried with a coarse and crunchy breading, and doused with a spicy remoulade sauce — mainly mayo. Dill pickle chips complete the ensemble.

Actually, you can profitably make a meal of sides alone ($4 to $6), which might include the crawfish-stoked mac and cheese (a frequent special), red beans and rice, and fried green tomatoes, which are just as expertly fried as the catfish. Sometimes, Gumbo Bros. offers specials such as jambalaya and shrimp etouffee, but these are often not as good as the regular menu offerings. So stick with the subs, stews, and sides.

Our review of Gumbo Bros. 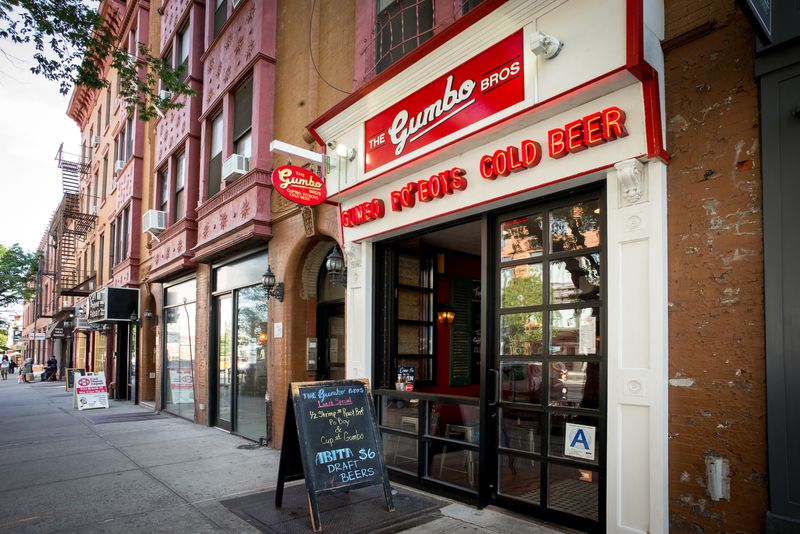 Cost: Dinner for two with two apps, one po’ boy, one big bowl of gumbo, and two beers, with tax but not tip (the place is self-service), $50

What to Drink: Gumbo Bros. labored in its early months with no alcohol license, but finally it arrived and draft Abita beer from Covington, Lousiana, is now available in five styles.