Atla Blurs the Lines Between Breakfast and Dinner

Share All sharing options for: Atla Blurs the Lines Between Breakfast and Dinner

Review and information for ATLA

At Enrique Olvera’s Atla, the second New York restaurant by one of the world’s most famous Mexican chefs, you’re best off dining during the day because it offers one of the city’s most beautiful breakfasts. Consider two dishes: A mash of minted sweet peas arrive on torpedo-shaped masa cakes — making the tlacoyos a stunning visual impersonation of avocado toast — while the actual avocado toast sports such an impossibly polychromatic array of tomatoes you’d swear the kitchen took its inspiration from a bag of Skittles.

Second, the space itself — a long, narrow, Instagram-friendly white plate of a room — begs to be populated in the morning and afternoon, thanks to a wall of Cadillac-sized windows that drench Atla in natural light. The windows overlook one of the city’s more sartorially-inspired stretches of Manhattan: They frame a man in a jean jacket on a longboard skating against traffic on Lafayette. A gentleman in a gray overcoat with a leather weekend bag zooms northward on a hoverboard. A woman hurries down the sidewalk in an oversized sports jacket, a loosened neck tie, and, wait for it, sweatpants.

I take this all in. Then I meditate upon the reality that I’m paying $14 for little more than a bagel schmear’s worth of vegan coconut yogurt.

The yogurt is good: whipped to the texture of soft meringue, topped with sweet blueberries, and finished with a drizzle of olive oil. The curd is sour at first, then gives way to a whisper of tropical fruit so gentle it’s more of a memory than a proper aroma. I pair the coconut yogurt with cafe con (vegan coconut) leche, which I recommend over the cafe con cashew milk, a beverage that tastes like Skippy-flavored coffee.

Since I’m on a roll I order the coconut oatmeal that also happens to be vegan — a curious name for a dish that doesn’t contain oats. The sustenance of choice here is chia seed, an historic Aztec staple that Americans fell in love with after reading about its health benefits in listicles. Atla soaks it overnight, pours it into a shallow brown bowl, then tosses chia with flax seeds, pumpkin seeds, candied ginger, and cashews. Oatmeal, traditionally, is a nourishing, rib-sticking dish. This chia pudding with delicate notes of cinnamon and vanilla is about as filling as the foam off a cappuccino.

I take a photo of the fauxmeal, admiring how the coarse nuts match the blonde notes in the walnut table, though they’d really look just as nice on the long grey marble bar. I post the pic online and am rewarded with moderately successful engagement. For this repast I calculate that I’ll spend close to $40 after tax and tip.

I finish my breakfast and conclude I still need to eat breakfast.

Mexico’s culinary ambassador Enrique Olvera made his New York debut in 2014 with Cosme, a Flatiron destination that, above all, articulates (and charges a premium for) the myriad flavors of corn. It is, without question, one of the country’s most important and distinctive restaurants. I awarded it three stars.

His second establishment, the more affordable Atla, opened in March in a NoHo apartment building where rentals start at $12,000 a month. It specializes in the type of West Coast-y superfoods you’d imagine slender people living in these $144,000 a year apartments would post about on social media: nut milks, honeydew tarragon juice, flax seed chilaquiles, kale tamales, egg-white omelets, pico de gallo-topped quinoa salad, and ayocote hummus. Atla isn’t so much of a Cosme-like dinner destination as it is of-the-moment, an unevenly delicious all-day breakfast spot that weaves its Mexican accents into the California dreaming prevalent at spots like Dimes or El Rey.

I don’t typically single out morning meals in my starred reviews because serious chefs don’t typically take breakfast very seriously, if they serve it at all. The conventional line of thinking is that a.m. diners are looking more for standard nourishment than culinary inspiration, which is why restaurants that do serve breakfast rely more heavily on tried-and-true classics than the ambitious repertoire of a Michelin-starred chef.

Breakfast has been changing as ambitious restaurants look for more ways to squeeze profit out of the spaces they pay increasingly high rents for, and — as restaurants like abcV in New York and Sqirl in Los Angeles show — there’s a market for being more creative about morning offerings.

Atla is at the front of that change. Eschewing bacon, pancakes, or egg sandwiches, Olvera’s breakfast takes cues not from diner culture with its fill ‘em up mantra but rather modern restaurant culture, letting diners build small tastings of sweet and savory fare.

Atla makes breakfast an all-day affair from 8 a.m. until 4 p.m. Try walking into most New York restaurants and ordering ranchero eggs at noon on a weekday. At Atla, it’s not a problem as long as you’re willing to put up with overcooked eggs in a bland tomato sauce. The better call are those masa cakes I was telling you about, tlacoyos anointed with spring peas crushed in the style of refried beans. The vegetable laced with mint simultaneously jolts the palate with chlorophyllic sugars and incendiary serranos.

In case anyone thinks this breakfast until the late afternoon schedule is designed to buy off night owls like me who don’t typically eat their first meal of the day until 1 p.m., this is where I tell you that Atla also serves its full lunch and dinner menu the second it opens, parallel to breakfast.

Kudos to Olvera along with his James Beard award-winning lieutenant Daniela Soto-Innes, for blurring the lines between what Americans eat in the morning versus the evening. This means anyone can arrive in the early morning and order enchiladas in warming chipotle-laced red salsa, fragrant green tomatillo salsa, and queso blanco. The dish isn’t so much about chicken wrapped in tortillas as it is an excuse to take a spoon and sip perfectly composed salsas with salty cheese.

Whether it’s breakfast or dinner, vegetables dominate the menu as has become the norm for 2017. Even in the steak tartare relleno — bits of raw strip loin tucked into a giant poblano with carrots, potatoes, and scallions — the dominant flavors are the vegetal tang of the pepper and the pureed habenero, tomatillo, and pumpkin seeds. The raw cubes of beef round out an ode to chile peppers. Chicken caldo, in turn, serves as a delivery mechanism for a salad’s worth of basil, oregano, and cilantro. And the largest quantity of pork on the menu comes in the humble chicharon guisado, soft blankets of pig skin that serves as sponges for the hot crock of salsa verde they’re stewed in, a dish that was maybe a bit too steamy for a recent 90 degree day.

And yet, in light of this stunning showcase of vegetables, herbs, and chiles, Atla’s best dish is somehow the avocado toast, that typically overpriced brunch dish that pales in comparison to the cheaper, tastier, more bespoke versions you can make at home. Soto-Innes turns a thick slice of ciabatta into a veritable vegetarian buffet, smearing it with goat cheese, guacamole, onions, and tomatoes ranging in color from red to green to purple to yellow. It’s a shockingly balanced blend of fat, funk, salt, and acid, with leaves of cilantro and slices of jalapeño that impart verdant fragrance with aggressive heat.

New York has a solid track record of sending out-of-town chefs back home with their tails between their legs, so give Enrique Olvera credit; he’s two for two so far. Honestly at this point if he wanted to open a cupcake shop, I’d put money on it.

Here’s what else to order (or avoid) at Atla:

Herb guacamole: Large chunks of well-salted avocados with whole mint and basil leaves. You scoop this up with a single, massive chile-dusted purple tostada, which fully covers the guacamole bowl in the modern, Ignacio Mattos-style of lettuce covering an entire steak. The plating speaks to the primacy of corn in the Olvera pantheon of ingredients. But more practically, this is just a delicious, perfectly executed dip.

Mushroom quesadillas: Melted cheese with mushrooms in a tortilla. This trio of humble ingredients is ubiquitous throughout New York, but at Atla, the heady fungi, stretchy cheese, and robust corn reach otherworldly heights. This is a near-perfect dish.

Pambazo sandwich: Two slices of brioche painted in guajillo salsa and fried on the flattop, then stuffed with a lot of lettuce and a little bit of potato and chorizo. It tastes precisely like its component ingredients, which is why you should order one.

Fish Milanese: Bland white fish breaded and fried into a one-note torpor. Milanese is practically the official dish of Latin America; Olvera can do better here.

Arctic char tostada: Raw char and capers on a farmer’s cheese-slicked blue corn crisp: because every chef has to kowtow to the New York bagel with lox and cream cheese. This one’s a skip.

Farro wheat and quail egg meatballs: A study in bland meat drenched in a cloying salsa and stuffed with overcooked eggs.

Corn tamal: A coarse blend of maize underneath a pile of queso fresco. It’s listed as a dessert but works as well as a cheese course. If the corn husk pudding at Cosme is brilliantly restrained in its sweetness and expression of how corn can boast a vegetal tang, the tamal pushes corn’s savory side to an unwelcome extreme. Skip it.

Strawberries and cream: Gelatin of strawberries in a fluffy espuma of cream. Nothing wrong with modernizing a classic; it’s just too bad the stiff berries don’t pack the fragrant bliss and sweetness they do in their original form. This is manipulation gone awry.

Sweet potato: The best dessert at Atla is a fork-tender sweet potato drenched in condensed milk. Pair it with a strong mezcal.

Our review of ATLA 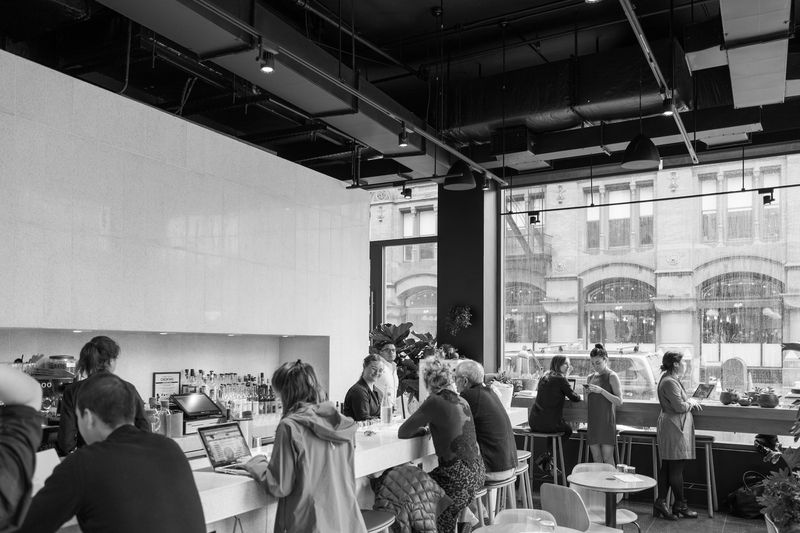 Bonus tip: Walk-ins only, and no one picks up the phone, so check Twitter (not always updated) or Facebook (better maintained) to see if it’s closed for a private event. I learned this the hard way.