Share All sharing options for: A Brilliant Bit of Tuscany Lands in the East Village at Fiaschetteria Pistoia

Review and information for Fiaschetteria "Pistoia"

In the 1990s, Tuscan cuisine blazed across the culinary firmament like a comet. Helped along by Frances Mayes’ book-turned-movie, Under the Tuscan Sun, Americans were besotted with the region’s simple and elegant cooking. We savored pungent pecorino and rustic salami as a first course, just-made pastas lightly sauced as a second, and third courses of meat, fish, or fowl unencumbered by sides or starches. And the cuisine’s emphasis on fresh and locally sourced ingredients was to profoundly influence New York dining in the decades that followed.

But, once translated into the American dining idiom, there was little in this sea of red-sauced abnegation that could be described as truly Tuscan. We simply lacked the original ingredients and the will to faithfully replicate the cuisine. Chefs came to use the term as code for any approach that emphasized pasta and a greater proportion of produce, ushering in an era when even TV dinners and cans of cat food were labeled “Tuscan.”

Real Tuscan restaurants in the city have remained rare. Some of the best have been founded by expat Tuscan chefs like Rita Sodi (I Sodi and Via Carota) and Cesare Casella (the now-closed Beppe and Maremma). Now we have another: Fiaschetteria Pistoia — named for the straw-basketed Chianti bottle — opened a few months ago at 11th and C. This improbably located spot was founded by Emanuele Bugiani, whose family owns Fiaschetteria La Pace in Pistoia, a trattoria 30 kilometers northwest of Florence.

Several of the antipasti have Florentine origins. There’s pappa col pomodoro ($10), a brightly colored porridge of bread crumbs and tomatoes that tastes like a bowlful of summer sunshine. Few New York restaurants have had the testicoli to serve it (Tribeca’s Pepolino is the only other I know of), since the dish looks like something intended for babies and invalids. Another Florentine dish, sformatino di zucchine is also found among antipasti, a flan flecked with summer squash in a delicate Parmigiano sauce.

A dish you’d find everywhere in the sunflower-strewn Tuscan countryside is crostini Toscani ($13). This plate of toasts deploying the region’s notoriously saltless bread — said to be a medieval response to a papal salt tax — comes with a creamy puree of chicken livers redolent of sage and other herbs. Skip the more elaborate version with mushrooms and baked ham: The livers are heavenly enough.

Yes, you can get prosciutto San Daniele from northern Italy. Here, it’s sliced on the red, hand-cranked slicer that’s the focus of the dining room and turns heads every time the waiter steps up to it. Better still is the prosciutto Toscano. Every hilltop town in Tuscany has its own version of this cured-but-not-cooked ham, which slices up salty and funky and a bit lighter than its more expensive San Daniele counterpart.

The décor at this restaurant might be termed East Village rustic, including the usual rickety tables, tin ceilings, and crumbling walls, forming the local equivalent, I suppose, of a rural osteria in the Tuscan countryside. Posters of canned food products dating from the 60s adorn the walls, perhaps the work of some Italian Andy Warhol. In the back corner is a pasta-making machine, and one of the cooks frequently steps out of the kitchen to tend it, making pastas that, if not all Tuscan, are uniformly delicious.

Why the pasta menu departs from its purely Tuscan agenda is unclear, but we have a very nice cacio e pepe ($16), using fettuccine laved in a Roman sauce of pecorino and black peppercorns, the latter ground a little too fine. Pappardelle in a Bolognese ragu is also available along with gnocchi with pesto such as might be found in Genoa. The most purely Tuscan pasta is a broad noodle here called by its generic name of maccheroni in a chunky wild-boar sauce. All are quite fantastic, but make sure you examine the brief specials menu before ordering a second course. It often includes gnudi, which are wrapper-free ravioli made popular in New York by April Bloomfield at the Spotted Pig. Looking like ping pong balls flattened by a forearm smash, this version features spinach and cheese.

As in a Tuscan roadhouse, the secondi menu presents only three or four choices per evening that once again range over Central Italy, and might include baccala alla Livornese, meatballs in sauce, veal scallopine, or, on one occasion, an olive-oiled New York strip ($30): a decent imitation of beefsteak Florentine. That the specials menu had called it a veal roast didn’t bother me. In an old-fashioned Tuscan way the proprietor was simply providing the best of what he had to offer.

Our review of Fiaschetteria "Pistoia" 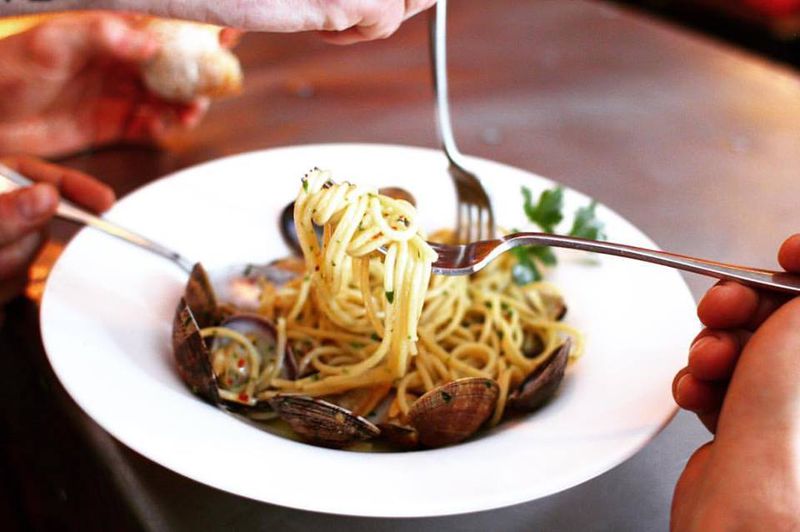 Cost: Three course dinner for two, including two antipasti, a shared pasta, and a shared second course, with a bottle of wine and tax but not tip, $120.

What to drink: The limited wine list is charmingly presented in an antique carry-around rack brought to your table, including a few bottles of red and a few bottles of white. Carmignano ($43) is a red blend of sangiovese and cabernet sauvignon that has been made in a region just northwest of Florence since the 16th Century. The producer is Tenuta di Capezzana, a historic vineyard that regularly produces spectacular bottles that score two or three glasses in the Slow Food wine guide. Available by glass, quartino, or bottle, the house red (a montepulciano d’Abruzzo) ain’t bad, either, at about half the price.

Bonus tip: You could skip the third course — it’s the restaurant’s least impressive — and double up on apps or pastas, or even profitably eat a dinner that’s all apps, but then you’d be missing the traditional progression of a Tuscan meal.