Review and information for The Aviary NYC

Once upon a time, there was an East Village wonderland called Booker and Dax, a magically boozy place that sprinkled pixie dust over the city’s largely classical and overly serious cocktail scene. Bartenders caramelized drinks with blazing-hot pokers and clarified ripe bananas into rum with centrifuges and froze basil leaves with liquid nitrogen. The complex techniques and wacky flavors made it the city’s only fully experimental bar. And somehow it was also an accessible experiment, with $14 drinks, $12 ham plates, and no reservations.

It closed in 2016, but less than a year later, New York again has a modernist cocktail parlor, albeit in a slightly different latitude and altitude: the 35th floor of the Mandarin Oriental on Columbus Circle. The Aviary, a spinoff of the Chicago original, is the long-awaited East Coast debut from the folks behind Alinea, a world-renowned gastronomic playpen where chefs send out fried chicken liver mousse made to look like volcanic ash, and where patrons suck the helium out of green apple taffy balloons.

So it’s no surprise when The Aviary’s bartenders — a loose term, as the bar is a glass-walled kitchen — send out the following bit of whimsy: coffee-laced Manhattans in clear bags filled everything-bagel perfume. A server cuts open the bag and the scent lingers for just a second. It is only transportive in the sense that it evokes something New Yorkers eat every day for a buck. Here, that aroma and the very average mix of rye and vermouth it perfumes cost $27.

The Aviary, alas, isn’t as accessible of an experiment as the dearly departed Booker and Dax. It is, however, a great place to Instagram cocktails, if that’s your thing. Perhaps you’ve seen photos of that bagel drink juxtaposed against the Central Park skyline, with the restaurant’s branding emblazoned on the bag? The staff will even offer to ’gram for you if your drink has a particularly intense interactive element.

If only The Aviary were also a great place to drink those cocktails. Or pair food with them. Bar snacks, typically a category of cuisine that’s meant to nourish (and dampen the effects of alcohol) trend in the direction of internationally eclectic hors d’oeuvres here at The Mandarin. The bites are geared toward whetting the palate and draining the wallet, from the rustically expensive — a pork rind the size of a small child for $17 — to the nearly unshareable — about three bites of kampachi ceviche with Thai green curry for $24 — to the wholly unshareable — Alinea’s raviolo of black truffle juice, a single bite for $18.

For those who care to avoid the wait for walk-ins, reserving a seat requires non-refundable deposits to the tune of $40 to $100 per couple in the evenings. If same-week a la carte spots are in short supply, it’s often easier to reserve for cocktail and canape tastings, running $280 or more for two after tax and service, a spendy reality that smacks of we’ll-only-book-you-for-bottle-service elitism.

The deposit-style booking process also applies to the sister spot next door, The Office, a windowless ode to leather and wood that serves cocktails that are more creatively traditional than avant-garde. Think: amaretto sours laced with black truffle or Old Fashioneds infused with notes of banana and miso. It also serves beef tartare for $45. And Iberico ham plates for $64. Like The Aviary, or much of New York, it feels designed for a particular tax bracket.

To be fair, The Aviary, the focus of this review, and The Office remain true to their haute origins. Frontmen Nick Kokonas and chef Grant Achatz are largely luxury restaurateurs; dinner for two at Alinea can easily run $1,050 or more. The Aviary, in turn, has been a spendy affair since its Chicago debut in 2011. That bar, according to its own website, is where “cocktails and service are given the same attention to detail as a four-star restaurant.”

That description, however immodest, feels apt when imbibing the “Bring Another Smurf,” a cocktail that involves a layer of white-coconut cordial sitting underneath a purple frozen disc of pea flower-infused mezcal. It arrives in a freestanding glass pipe. You blow to mix the components. Then you inhale. The stem liquid tastes strongly of booze and lime, while the aroma from the fat tobacco end of the pipe is pure tropical fruit. The drink doesn’t so much evoke a margarita as it does something Dumbledore might imbibe in a Harry Potter novel.

Just as exhilarating is the gin and tonic. It’s a blend of Bombay Sapphire, apple, almond, and frozen cucumber that looks like a mad scientist’s green beaker, drinks like a slushie, and packs a level of vibrantly fizzy carbonation that almost borders on Alka Seltzer.

That G&T is $21. That not a bad thing, per se. As wine pairings sometimes approach the price of tasting menus, and as martinis often cost more than a burger, there’s something to be said for spending a few extra dollars on bespoke cocktails that, arguably, inspire at the same level as a composed dish that likely took as long to create.

But value is a product of more than just a few fantastic drinks. The bad news is the larger experience of spending an hour or two at The Aviary isn’t quite as splendid as it should be at these prices. The bar, despite its seductive curvilinear sofas, feels like an extension of the hotel lobby. Giant windows overlook Central Park, but the Mandarin’s brightly lit reception area reflects back, partially obscuring the vistas. And the lounge-y soundtrack evokes the inane background music in a luxury car advert.

Meanwhile, some of The Aviary’s other drinks fail to live up to their prices.

Take the “Science A.F.” The complex and compelling elements of a penicillin — ginger, lemon, and scotch — are sucked up into a heated vacuum coffee chamber, tableside, where they’re all warmed up and infused with blueberry meritage tea. The resulting product, poured over ice cubes that melt quickly, has all the color, complexity, and flavor of watery Hi-C. Cost: $28.

Consider “In the Rocks,” an Old Fashioned encapsulated in a sphere of ice. Diners break it apart with a modified slingshot. It splatters cold shards of ice on the tables, and it results in a glass of under-diluted scotch, a bit of cassis, and none of the Sichuan peppercorn the menu promises. It comes with a half a glass of Champagne and costs $29.

In the mood for a bloody mary? The kitchen places five tiny garnishes not on the rim of a highball, as is the norm, but on an elevated glass tray. Those bites, which include a littleneck clam with spicy cucumber, as well as a little knob of tomato-horseradish gelee, are uncomplicatedly refreshing. Then comes the bloody itself. A server pours it into a hole in the middle of the garnish tray, funneling the liquid into a small glass bowl filled with fresno pepper ice balls. It starts out as lukewarm, without any compelling acidity, then finishes as spicy and watery, without any compelling acidity. The cost is $38, more than a typical hanger steak.

“The Aviary is a great place to Instagram cocktails, if that’s your thing.”

Pro tip: Do not make reservations for The Aviary’s tastings. Cocktail lounges are more pleasant when you don’t risk your own money on a pre-purchase agreement for a set amount of alcoholic beverages 14 days out. Make the decision on how much to booze up when you show up.

Another tip: Skip the ramen, an appetizer-sized portion of mushroom dashi and insubstantial noodles for $27. The chawanmushi is also a miss; the delicate Japanese custard should tremble on the spoon like a flan that’s only barely set. Here, it sports the denser consistency of a gently overcooked pot de creme.

The A5 wagyu steak is the steal of the menu for $29. It’s all you need to understand the powerful beefiness and luxurious fattiness that this cut provides, and it’s an entirely better deal than at other venues, which typically charge $100 for unnecessarily large portions.

Finish with the pineapple, the sweet fruit acting as a foil to savory mole, or end with the white dessert, a plate whose monochromatic palette belies a stunning collection of textures and flavors, from coconut ice cream to lime sorbet to cashew pudding and tonka bean meringue. Pair it with the carrot cake cocktail, a simple riff on the Ramos Fizz (egg white, gin, lemon) that tastes precisely of the cream cheese-studded sweet.

So that’s The Aviary. It might fulfill the needs of a luxury hotel, but it doesn’t represent the bright future of avant-garde cocktailery.

Our review of The Aviary NYC 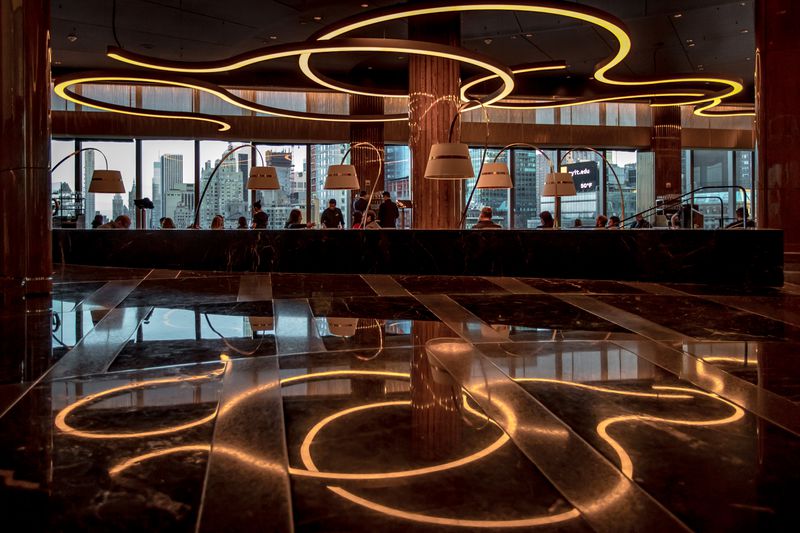 Bonus Tip: The Mandarin applies an automatic “gratuity” of 18 percent to all guest checks — something that’s easy to miss on the bill if you’re not looking for it (servers never mention it or point it out).