Reynard Has Finally Transformed Into a New York Dining Destination

With a revamped menu, the Williamsburg hotel restaurant is more than a brunch one-trick pony

Share All sharing options for: Reynard Has Finally Transformed Into a New York Dining Destination

Review and information for Reynard

One of the most insightful messages in The French Laundry Cookbook, a classic tome that has inspired and frustrated scores with painstaking elevations of American cuisine, is that something as simple as pomme purees — humble mashed potatoes — can be strikingly complicated. In fact, it might be “the most difficult recipe here,” the authors wrote, “because there are so many small choices that make a big impact.”

It’s a lesson worth recalling at Reynard in Williamsburg’s Wythe Hotel, in case anyone’s inclined to dismiss the pumpkin puree — humble mashed squash — as yet another plate of marked-up Thanksgiving nostalgia.

Christina Lecki, who joined as head chef this summer after leading April Bloomfield’s Michelin-starred kitchen at The Breslin for years, makes a bevy of infinitely small choices that add up to big flavor. This is true of all her fire-kissed American cuisine, the product of a wood-burning hearth in the kitchen, but it is especially true of her shockingly complex pumpkin.

Lecki uses the dying embers at the end of service to slowly roast her pumpkins overnight. The next day, she purees the collapsed gourds; cooks them down with chicken stock and onions; fortifies them with buttermilk; laces them with chile, cinnamon, and nutmeg; passes them through a chinois for silkiness; ladles them into a small brown wooden bowl; and finishes them with a pat of kefir butter.

The pumpkin accompanies a half chicken that’s been smoked and roasted, which is great in its own right, but believe me when I say that bird is just a supporting player. The puree takes on the color of rust and sports the texture of ice cream. The flavors range from vegetal to sweet to gently tangy (from the kefir), with lingering notes of Christmas spices. And unlike a fancy French pommes puree, or an overindulgent polenta, the butter here is used with restraint; it never detracts from the essence of the pumpkin.

It is best consumed on a cold day, watching the neon of Wythe Avenue light up the falling snow. Add a touch of the chicken’s vinegar- and offal-laced gravy for extra oomph, and take pleasure in consuming one of New York’s next great dishes.

Since it opened nearly six years ago, Reynard’s identity hasn’t so much centered around the food or the chef as it has around the urban ethos of its operator, Andrew Tarlow. The hospitality guru rose to fame at his restaurants Diner and Marlow & Sons, where menus scrawled on receipt tape, carpentry contracted from local artisans, and meats sourced from local farms helped shape the Kings County restaurant identity and solidify a global image of #Brooklyn as an exportable brand of crafty hipness.

Reynard is a touch spiffier than Tarlow’s other venues. It felt, in the early days, like a gently commercialized hagiography of Williamsburg’s industrial past, a clean-cut blend of reclaimed wood ceilings, scratched mirrors, patterned tile floors, and distressed brick walls, all in a reasonably priced hotel that boasted killer views of Manhattan. The natural wine list was awesome, the natural light was killer for photo-friendly brunches, and the straightforward American fare was, well, straightforward. But it never wowed.

Five years later, Reynard has earned its patina. The dining room feels like a refuge from the neighborhood’s current state of Disneyfication, with more and more exorbitant apartment buildings of glass and steel choking up the skyline, and with proliferating street-mural adverts commissioned by the likes of Spotify, Microsoft, Delta, and Tinder.

And the food, with its service-included pricing, now deserves its own narrative. It finally wows. Lecki’s all-day American fare makes hearth cooking feel like the primal — yet studied — act of deliciousness it should be, rather than the performative and pedestrian act it’s become in too many restaurants installing Cadillac grills. Her creations, more gutsy than gut-busting, are lighter and brighter than much of what she put out at The Breslin, with no fatty steaks for two, with acid used strategically, and with the flavor of fire feeling more like a subtle background note than an overwhelming act of quasi-barbecue.

Consider the pig’s face — a bit of an acquired taste. Lecki makes it user-friendly by heating it up on the griddle, rendering all the gelatinous bits soft, and bringing out the dish’s porcine perfume. She lays a small pile of lettuce on the side for wrapping, along with a little bit of pickled jalapenos to cut through the fats with spice and zing. There’s your Italian-American bo ssam right there.

Lecki gets more aggressive with the fire in her urchin course. She torches pita over the wood coals, dusts it with a speckle of house-made togarashi, and pairs the piping-hot flatbread with cold Massachusetts uni on the half shell. This bread and butter course — with its palate shocking chaud-froid — brilliantly uses the heat of the chile and the smoke of the grill to tame the squishy funk of the sea.

To achieve this level of precision, Lecki had Tarlow and a local steelworker remove the kitchen’s old Argentinian grill, whose raw-wood style of cooking could overpower ingredients with acridity, she tells me. In its place, Tarlow installed a plancha and hanging racks, allowing for more controlled cooking.

Garlic slowly smokes while hanging over the hearth; cooks squeeze the sweet pulp into a soul-warming soup fortified with leftover meat stock, squishy pecorino breadcrumbs, and tangy whey. The yellow broth’s opacity belies its nimble flavors; it nearly vibrates on the tongue. The portion is not small, but because of its balance, it manages to work as an appetizer for one.

This being Reynard, of course, it’s likely some readers and regulars have a very specific question: How’s brunch? Well, it’s great, but it’s lightened up a bit. Translation: The famed Dutch pancake, often laden with ham and Gruyere, has been banished from the menu.

Instead, diners will encounter delicate egg crepes and crisp socca — southern French chickpea pancakes topped with a tangle of burnished cauliflower and a smattering of za’atar.

Maple-glazed ham arrives as a single pink slice, the thickness of cardboard and curled at the edges from a proper smoking. The meat packs notes of salt and sugar, with a dusting of aji dulce for a fruity heat. Paired with soft, prosciutto-studded collards and two poached eggs, the Southern-leaning dish never veers into nap-inducing territory; the portion size will leave the non-boozing brunch patron feeling refreshed. Same goes for the roast beef, cooked rare, sliced thin, and slathered in horseradish sauce over chicories. It reads like a steakhouse lunch on the menu; it turns out to be a nimbly beefy salad in disguise.

Back at dinner, Lecki lights up the grill for house-ground merguez, a loosely packed sausage stuffed with lamb hearts, liver, kidneys, and fermented red chiles. She lets the warm, smoky, gamy flavors build, and then uses a verdant cilantro and parsley salad to cleanse the palate.

She fries plump East Coast oysters and wraps them in tender lettuces. She sears ’nduja-stuffed squid to an ethereal creaminess. She pan-sears Peconic Bay scallops, leaving the interior cool and rare, while imparting the exterior with a complex campfire char. She grills pork coppa to a breathtaking medium rare; some bites are as tender as filet mignon, and others pack a welcome heft. All sit in a gorgeous bright broth of apple cider vinegar, pork fat, and mushrooms.

You finish with a house-made snowball — coconut-dusted meringue with tart lime curd. And you declare that Reynard isn’t just better than ever, it’s one of the best revamped kitchens of 2017 altogether.

Our review of Reynard 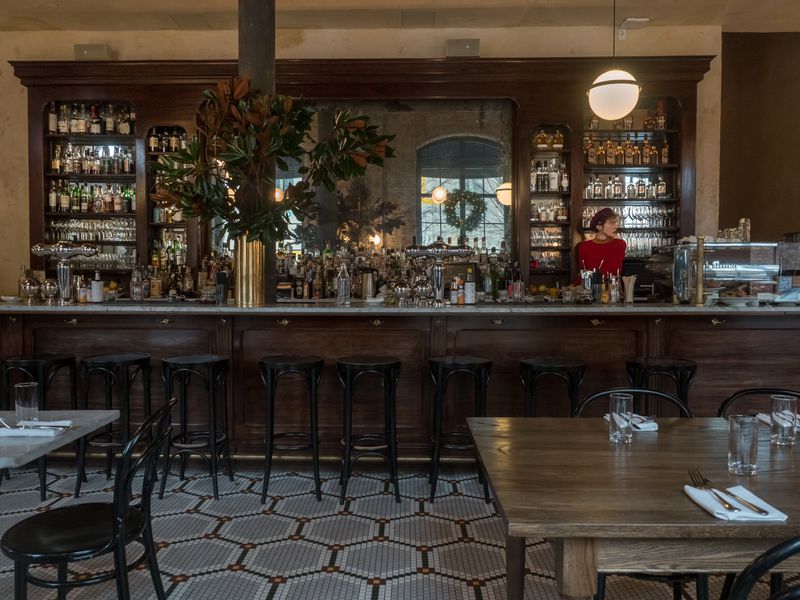 Bonus tip: Walking in shouldn’t be a problem during dinner, but consider making reservations for brunch, Reynard’s most popular meal service.

An Ambitious Pastry Chef Debuts Her Own Dessert Palace in Flatiron