Review and information for Chawla's 2

For many of us, the first Indian cuisine we fell in love with came from Punjab: lamb and chicken in thick gravies pungent with ginger, garlic, and masalas, flaunting powerful flavors that put European gravies to shame. And those meaty curries were matched with meatless ones that taught Americans new ways to look at vegetables like spinach, potatoes, and cauliflower. But as the present century dawned, other regional Indian cuisines from places like Kerala, Hyderabad, and Gujarat came to supplant — or at least rival — it in our affections. Now, the Punjabi menu has returned at Chawla’s 2 in enhanced form, and the time has come to give it another try.

The Punjab is a region that sprawls across India’s northern frontier into Pakistan. It lies along the Silk Road, which has historically provided ready access to spices that are often used by the handful. The Sikh religious group’s center and principal temple is there in Amritsar, a city that’s name-checked several times on the menu. Amritsari kulcha ($3.49) is one example — an herb-flecked, potato-stuffed flatbread brushed with oil. It could become your favorite Indian bread.

Chawla’s 2 represents a restaurant chain with 110 branches in Australia, New Zealand, and Canada, as well as northern India. It was founded in a town northeast of New Delhi in 1960 by S. Attar Singh Chawla. The “2” in the moniker signifies a modern approach to cooking, featuring locally sourced ingredients and a menu emphasizing tandoori cooking and adding other fare like Indo-Chinese. Located just southeast of Gramercy Park, the restaurant is well lit and boxy, decorated with playful cartoons of colorfully turbaned Sikhs juggling veggies and spinning flatbreads in the air.

Complete meals for one person are a real bargain, mainly in the $10.99 to $13.99 range and including a main dish, dal, and roti or rice. Larger entrees accompanied with rice are paradoxically $3 less, so it’s better to marshal a group of friends and share several. Then you can also explore the appetizers, which are hidden away in the sections called “Sides” and “From the Fryer.”

Appetizer gobi Manchurian ($10.99) comes from the Indo-Chinese canon, battered and deep-fried cauliflower smothered in a tangy sauce. Most places it’s greasy and syrupy, but here the dish is relatively light. With similar flavors, lollipop chicken deploys wings with the flesh pushed to the end of the bone, making them look like Chupa Chups. For vegetarians, chilly paneer and chilly mushroom — using a common Indian spelling of “chili” — are good choices. A particularly filling starter is keema naan, a naan stuffed with ground meat that comes with a bucket of mild gravy.

But let’s cut to the chase, entrée-wise. One of the best features of the restaurant is the use of cream rather than milk in its recipes. Cream chicken ($8.99) is the menu’s flagship: boneless bird in a buff-colored sauce lacking the expected masalas. It tastes herbal and almost French. One of the herbs is certainly fenugreek, and the recipe, formulated by the chain’s founder, is further enriched with crushed cashews.

This dish seems like a challenge to the more commonly seen butter chicken, a Punjabi crowd pleaser featuring poultry pieces in a pink tomato sauce. Some fellow diners and I decided to compare cream chicken to butter chicken one evening, and I was the only one who preferred the cream chicken. “The butter chicken is a little bit sweeter and more richly flavored,” one friend observed. I recommend trying them both side by side, and rendering your own opinion, since they’re two of the most delectable things on the menu.

The northern vegetarian Indian standards are all available in above average renditions, including malai kofta (vegetarian “meatballs” in a thick sauce), palak paneer (spinach with fresh cheese cubes), and mushroom tikka. But the best vegetarian choice here is kukuri bhindi ($6.99) — shredded okra fried until the green vegetable achieves the consistency of fruit leather. Jumbled with raw yellow and red bell peppers and purple onions, the dish is an explosion of colors and textures. And for those who detest the usual sliminess of okra — this method of cooking banishes it.

In line with the fresh and natural aesthetic of the restaurant, the tandoori chicken is not colored red with artificial dyes. Instead, it is coated with a beige spice paste before roasting in the oven. While wholesome tasting, it doesn’t pack the smoky wham of the usual recipe, so skip it. One dish I found particularly interesting was something I’d never encountered before: rara mutton. Pieces of tender lamb swim in a sauce laced with lots of ground chicken. Ground chicken? Well, for folks who always order the meat lover’s pie in a pizzeria, consider this a great choice.

Our review of Chawla's 2 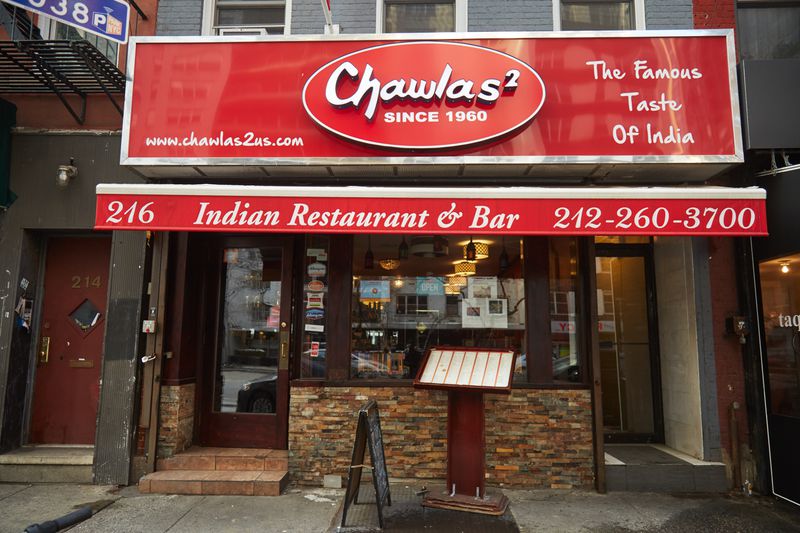 Cost: Dinner for two, including one app, entrees, one bread, two beers, plus tax but not tip is $50.

What to drink: Kingfisher or Taj Mahal Indian beer are good choices, but skip the wines available. The restaurant’s “fresh lime soda” ($3.99) is wonderful, filled with unexpected flavors.

Bonus tip: The restaurant’s biryani is among the most opulent in town. Filled with chicken, shrimp, lamb, and boiled eggs, and accompanied by a bowl of raita, at $16.99 it could make a nice lunch for two.