A Decade Later, Alex Raij and Eder Montero Are Still the Masters of Tapas

Two stars for El Quinto Pino and Txikito in Chelsea

Share All sharing options for: A Decade Later, Alex Raij and Eder Montero Are Still the Masters of Tapas

The sandwich inspired an amusing game of critical one-upmanship. When Peter Meehan of the New York Times reviewed the Chelsea spot, he declared the oceanic panino the “sandwich of the year.” A few months later, blogger Andrea Strong wrote that the “unini,” as she called it, had taken on “legendary, if not mythical status.” Serious Eats then upgraded panino to “sandwich of the decade” in 2009, the same year the Frank Bruni cast a broader net, calling it an “era-defining treat.”

They’re all impressive accolades for something that looked like an underbaked grilled cheese sandwich. The dish hailed from an era when restaurants didn’t calibrate visuals for social media; Instagram was still three years away and the iPhone had just debuted.

Good news: The sandwich has not been beautified for the smartphone era. The only thing that’s changed is the urchin itself, which Raij says is higher quality.

The pressed bread shatters when bitten. The squishy urchin bleeds neon juices. The sweet taste of uni fills your mouth — until mustard oil kicks in and stings the sinuses; that condiment doesn’t so much cleanse the palate as provide it a momentary reprieve from the funk of the sea. And while bigger restaurants — Toro and The Pool — would go on to serve uni sandwiches on toast with mustard, none have the approachable, iconic calling-card status that Raij’s does.

The serving vessel was, and still is, wax paper. This is not uni as a luxury item, which it often is. This is uni as a sandwich, meant to be consumed while standing up, on the go. It is one of New York’s great dishes.

As a certain strain of soul-draining monotony infects the New York dining landscape, with deep-pocketed empire builders and big-time chefs looking for The Next Big Thing, be it counter-service pasta, nouveau delivery, or quinoa-laced beet bowls, it’s refreshing that diners can still turn to a veteran, non-rock-star operator and find cuisine that’s simultaneously creative, thoughtful, and affordable.

El Quinto Pino and sister spot Txikito around the block remain two of the most compelling expressions of Iberian fare in New York. The former has few equals in the sphere of tapas, while the latter might just be the city’s top Basque spot. Both fluently alternate between the traditional and the modern, between pan amb tomaca and double-patty burgers. And both do so without charging more than $30 for pretty much anything.

El Quinto Pino and sister spot Txikito remain two of the most compelling expressions of Iberian fare in New York.

Maybe we should all be paying less attention to new restaurants with full-time social-media coordinators or fast-casual ambitions, and more to venues that have been grinding it out for years without a place on the World’s 50 Best list.

La Vara in Cobble Hill might be the Michelin-starred jewel of Raij’s tiny empire, which she runs with her co-chef and Bilbao-raised husband, Eder Montero, but that venue, an ode to the Sephardic and Moorish traditions of Spain, can command two-hour waits on a Saturday night. Neither El Quinto nor Txikito, by contrast, generate much of a queue for walk-ins. In fact both are so close to each other and the food comes out so expeditiously that one could literally hop between the two.

An ideal game plan: Kick off the festivities at El Quinto with cumin-spiced lamb skewers, follow up with chile- and anchovy-laced queso fundido, then scoot over to Txikito for ethereal salt cod fritters, with an interior blended to the texture of mousse and a heady flavor that evokes seafood chowder, and funky head-on shrimp.

Then return to Quinto for a frozen dark and stormy and rabbit paella where the yellow rice is a brilliant conveyance mechanism for the nuclear-powered aroma of saffron.

One could continue eating.

El Quinto began as a single tiny room. A larger dining area off to the side opened in 2013, but the heart of El Quinto is the bar room, with sconces the shape of antelope horns, wallside dining ledges as small as airline seat trays, burnished mirrors, chalkboard menus, and a curved marble counter — a classic design hack that lets solo patrons face other people instead of the bartender.

The size of dishes are proportionate to the room. They are small, rarely more than a handful and a half of food. And they are often unexpectedly sweet, but never in an unwelcome fashion.

Cantabrian anchovies lie on crackers adjacent to thin sticks of vanilla butter; just as the salt starts to overwhelm, the sugar-laced dairy wipes the palate clean like a milkshake. Bomba toledanas — spiced beef and potato fritters — come anointed with a thimble’s worth of habanero puree. The floral heat gently burns, until a mash of sweet peas, sitting below each croquette, cools the palate. And a pile of incendiary spreadable soppressata — essentially Spanish ’nduja — comes with a well of honey in the center, a classic Menorcan pairing that only seems foreign until you realize it’s the functional analogue to maple syrup-laced bacon.

Basque cuisine, at its heart, is a “cuisine of subtraction,” Raij writes in her cookbook, drawing contrast to the region’s more complex avant-gardists, from Arzak to Mugaritz. “Fancy embellishment is stripped away until you are left with the essence of an ingredient.”

And while El Quinto Pino is not a Basque restaurant — more about Txikito in a bit — her statement rings true. Or put differently: at El Quinto Pino, Raij and Montero use supporting flavors to deify a lead protein or vegetable. Their cooking evokes a superb three- or four-ingredient cocktail. Waiters don’t spend an hour describing the food upon presentation, because a spice or seasoning listed on the menu is apparent to the diner immediately upon consumption, without explanation or elaboration.

For example: Shrimp fritters can verge into scallop-like sweetness in other hands. At Quinto, the kitchen uses brown krill to draw out the deeper, richer, mid-tide tang of XO sauce. And while Raij says she pairs plancha-singed calamari with garlic and Parmesan to evoke a pasta, the umami-rich ingredients end up producing a simpler and grander effect: They make squid taste more like squid. It is near-perfect food.

Txikito is the slightly more creative restaurant, with certain refinements (no sandwiches, no burgers) and a somewhat heavier nod to seafood, in deference to the Basque love of all things maritime.

Even the fries here, doused in paprika, arrive with a ramekin of cod-laced mayo.

Like at Quinto, the cooks sear squid on the plancha, only they slice them into spaghetti-like ribbons and drape them over a puree of pine nuts with onions. They riff on txangurro, the traditional stuffed crab, by slicking the shellfish with cream cheese, warming it under the broiler, and lighting it ablaze with the very non-Basque sriracha; it packs as much crustacean flavor as a good crabcake yet it costs just $8.

The kitchen shreds skate wing with parsley coulis, fried garlic, dill, and cilantro, treating fish as if it is a salad ingredient meant to be tossed in a verdant and fragrant salad of herbs. It’s the type of dish one might expect at the two-Michelin-starred Aska.

Guests have more elbow room at Txikito. The bar is just a little bit longer. The wood-paneled walls don’t need windows to create the illusion of space. The garage-like front opens up during the spring, and sidewalk tables appear outside. It’s something to dream about until things get warmer.

Until then, make do with the homemade Navarran sausage, a semi-firm “rope,” as the menu calls it, of pork jowl cut with paprika. The smoke of that spice is brilliantly restrained, recalling a charcoal grill’s dying embers.

Raij forges chewy little gnocchi out of shrimp and iberico; the pink surf-and-turf nuggets, tasting simultaneously of shellfish and aged ham, arrive in a delicate squid ink sauce. Ropa vieja, the Cuban dish of shredded steak with peppers, is de rigueur as well. Txikito substitutes brisket and stuffs it into green peppers, balancing the meatiness of the protein against the vegetal tang of the capsicum. Softening the richness further is a layer of yogurt and a whisper of non-traditional yuzu oil; Raij tells me that for most of the dishes, she provides the inspiration, while Montero, a native of Basque country, pushes back when necessary.

Lemon cake, cut with orange-flower water, makes for a fine dessert. But it’s also hard not to resist dropping by El Quinto again for a sea urchin sandwich to go. During a year when so many new restaurants are soporific at best, spending all the more time at venues we’ve overlooked is a pleasant act of gastronomic protest.

Our review of El Quinto Pino 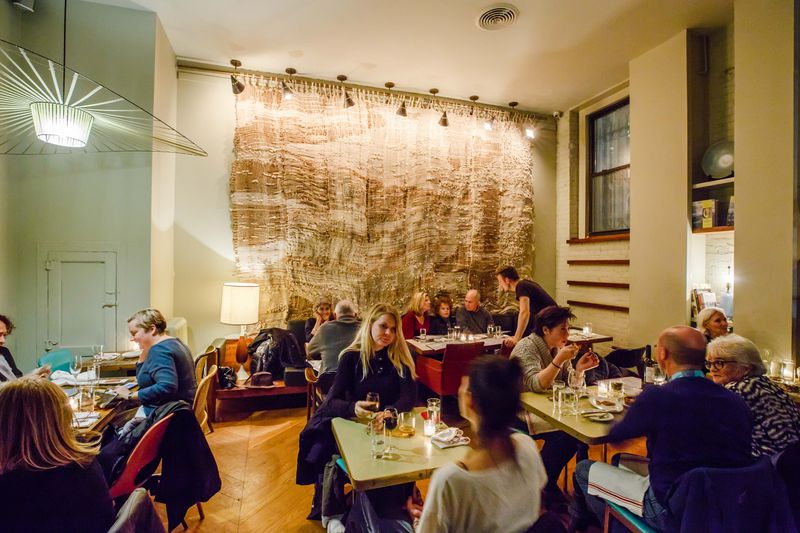 Cost: Most tapas and sandwiches at $16 or under; many dishes under $10.

Bonus Tip: The uni panini is rock star dish here, but do not sleep on the anchovies with vanilla or the Menorcan sausage with honey. 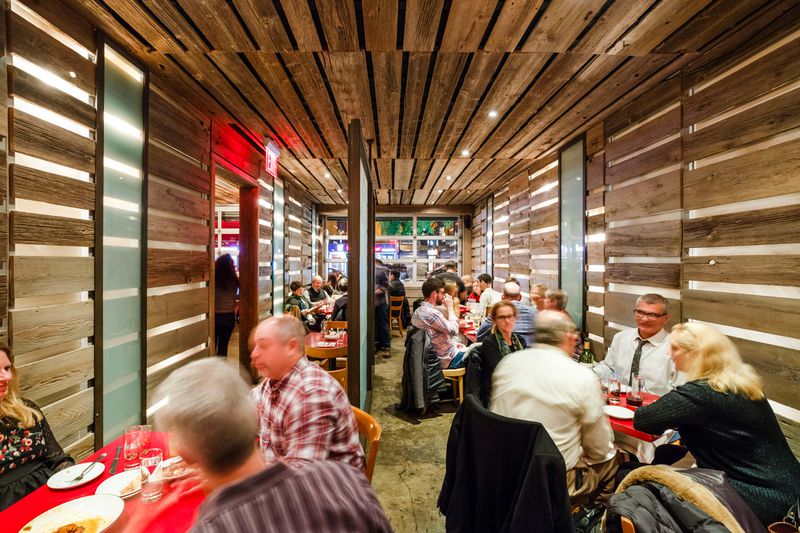 Bonus Tip: Excellent list of Txakoli wines by the glass.