Experience the Epitome of Georgian Cuisine at Brooklyn's Georgian Dream

Share All sharing options for: Experience the Epitome of Georgian Cuisine at Brooklyn's Georgian Dream

Review and information for Georgian Dream Cafe and Bakery

Of all the cuisines of the former Soviet republics, Georgian is the most delicious. It makes much of fresh herbs, turning soups and stews bright green. As with other countries along the Silk Road, kebabs are cooked over charcoal to be way fatty and smoky. Composed salads constitute another strong point, with walnuts and pomegranates making frequent appearances. And for those who love dumplings, Georgian examples are fist-sized, while the country’s breads are rapidly becoming New York classics.

Open one year, Georgian Dream is the city’s best restaurant from the mountainous republic that straddles Europe and Asia. It lacks the object-cluttered walls and paintings by late 19th-century artist Pirosmani — showing dudes with massive mustaches — that characterize many other Georgian restaurants. Instead, sitting at a table is like being in the square of a serene village. Up above hang street lights and balconies, whose doors seemingly might swing open at any moment as people wander out to admire the Bay Ridge sunset.

The breads mentioned earlier include khachapuris, and the menu offers three contrasting examples from the regional cuisines of Georgia. The one most New Yorkers will be familiar with is khachapuri acharuli ($15), which resembles a bulbous canoe filled with molten cheese. On top of the cheese, threatening to swamp the canoe, are a raw egg yolk and a knob of liquefying butter. Stir the ingredients before pulling off hunks of bread to dip in the delectable mess.

For those uninterested in a jiggling raw yolk in a slippery pool of butter, cardiologically-speaking, the khachapuri megruli ($12) might be the ticket instead. Shaped like a pizza, the bread is covered with a double layer of sulguni cheese. In fact, it’s what might be called a white pizza, only the cheese has been browned to make it chewier and more pungent. Imeruli khachapuri features two layers of dough with the cheese inside. Back in Georgia, there are at least five other variations, some featuring boiled eggs and potatoes.

You won’t find better charcoal-grilled kebabs than at Georgian Dream. The population of the country is largely Christian, rather than Muslim or Jewish, so it offers pork kebabs ($12) not available in Uzbek or Turkish establishments. These are made with fatty ground meat and come dusted with sumac. They’re also wrapped in a flatbread, so you can eat them like cylindrical sandwiches. Rice or french fries are served alongside. Pick the fab fries, which are creamy on the inside, and a perfect sienna brown on the outside.

Among other easy-to-love treats are the huge, thick-skinned dumplings. Like Tibetan momos or Shanghai soup dumplings, these khinkali ($12 for six) are round and puckered on top like a leather coin purse. They feature a mixture of ground meats seasoned with onions and garlic. When cut into, juice often spurts out.

As if this were the American Georgia, corn has made its way onto the menu in a big way in the form of gomi. This honest bowl of fluffy cornmeal porridge might be mistaken for hominy grits, and to further extend the illusion, the bowl is topped with butter and cheese. Don’t miss it. Georgian is also a cuisine loaded with stews. My favorite is chakapuli, a veal casserole with a bright green broth due to fresh tarragon — which also confers a liquorice-y flavor you might love or hate.

Probably the most famous Georgian entree is chicken tabaka, which a friend has facetiously called “road-kill chicken.” It consists of a partly deboned bird that gets flattened, fried, and then paved with crushed garlic; it has long been a staple of Russian and other former Soviet restaurants. Unfortunately, the version at Georgian Dream is pallid, and delivers no garlic wallop, so skip it. Instead, turn to the vegetarian dishes that pack the menu.

The regular tossed salads are pristine in their freshness and generously dressed, mainly featuring lettuce and tomatoes, and the pickle platter will remind you that, in a geographically confused way, Georgia is on the fringes of Eastern Europe, even though it’s east of Turkey. And so does olivie, which is a lot like American potato salad with a few extra veggies thrown in. But why not turn to the composed salads, which are more uniquely Georgian?

Indeed, the “assorted pkhali” ($16) might be the best thing on the menu — it’s certainly the most beautiful. Three compressed pucks of vegetable matter are aligned on the all-white platter: one pink, one yellow, one as green as a forest in springtime, all scattered with pomegranate seeds and fresh herbs. Green beans, beets, and spinach are the vegetables providing the colors, stuck together with a walnut, garlic, and herb puree. And you won’t find a more delectable vegan dish in Brooklyn.

Our review of Georgian Dream Cafe and Bakery 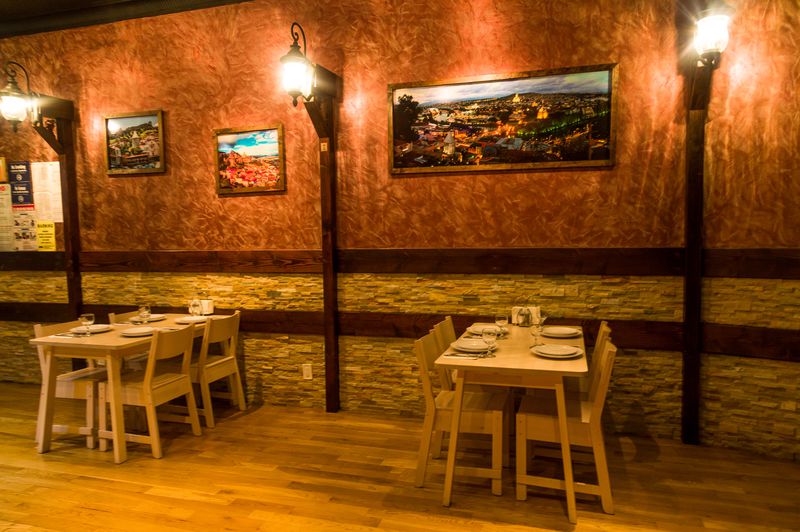 Cost: Dinner for two, including one salad, one cheese bread, a kebab with fries, and a stew, plus tax but not tip, $60.

What to drink: Georgian dream is BYOB, so bring beer or wine. There are also a number of great imported soft drinks on the menu, such as Natakhtari tarragon lemonade and Borjomi, a very mineral-ey carbonated water.