Nargis Fires Up Skewers Worthy of a Meat Destination

Share All sharing options for: Nargis Fires Up Skewers Worthy of a Meat Destination

Review and information for Nargis Bar and Grill

To all the chefs decorating their restaurants with stone hearths as expensive as Teslas and fire-spitting grills that shine like Cadillac rims, here’s a bit of advice: Dine at Nargis, a new Park Slope spot from one of New York’s best Uzbek chefs. The staff here can roast meats better than you, and with a heck of a lot less bling.

A small window lets diners peek into the kitchen, where a chef stands behind a plain steel trough filled with smoldering coals. The setup is as pretty as an air-conditioning duct.

Skewers of veal liver, lamb leg, and chicken heart lie inches above the coals, turning various shades of pink, tan, and brown. The chef twirls each kebab, or shashlik, six or seven times to ensure even cooking. He picks up a magenta hair dryer, slowly waving it past the white embers. The spurt of air speeds up the combustion process, akin to the oxygenating effect of a blacksmith’s bellow, only this comes courtesy of a plastic grooming device sold at Duane Reade for $25.

Grilling at Nargis isn’t Instagrammable performance art. It isn’t tableside flambe. It is simple cooking. Affordable cooking. Masterful cooking. The kitchen sends out cumin-laced chicken thighs whose gentle char, preternatural juiciness, and complex notes of smoke recall the delicacies of Tori Shin, a high-end Japanese hangout where a tasting for two easily runs $200. But here, at this months-old sequel to the Sheepshead Bay original, a proper dinner date won’t cost more than $80 after tax and tip.

Give credit to chef-owner Boris Bangiyev. In an era when the fates of so many restaurants rise and fall on reviews from the major critics, social-media fervor, high-paid design firms, and photographic virality, this 39-year-old Tashkent native built a loyal following with little of the above.

Here are some of the quirks one might notice while dining at the Park Slope location: a nonworking ATM downstairs, Cheesecake Factory-like headsets worn by the waiters, a 7-foot tall waterfall in the backyard garden, and a soundtrack that always seems to include “What’s Up” by 4 Non Blondes. The restaurant itself is distinguished by its exposed red brick, ornamental carpets, stunning tiles the color of Uzbekistan’s sky-blue minarets, a mural depicting the historic madrasas of Samarkand, and a bar television that shows the ballgame. The bar is often empty.

The real draw of Nargis, of course, is the breathtaking melting-pot cuisine of Uzbekistan, meaty and muttony traditions that balance Turkic, Asian, Persian, and Slavic influences. Cabbage kimchi — Stalin deported thousands of Koreans to Uzbekistan during the Second World War — sparkles with stinging heat and high-voltage acidity. Lagman, the classic Uighur dish, is everything it should be: a crimson lamb soup laced with mild chiles, green beans, peppers, and toothsome hand-pulled noodles. And the pan-Central Asian chuchvara, pan-fried beef dumplings in the shape of tortellini, arrived drenched in heady caramelized onions that alone would merit the $13 price.

This type of food isn’t in short supply in New York, where nearly half of the country’s 63,000 Uzbek immigrants live. Rego Park and Forest Hills in Queens are home to Cheburechnaya and scores of other great kosher Central Asian spots — frequented by the Bukharan Jews who fled as the Soviet Union collapsed. Uzbekistan’s Muslims, by contrast, have largely settled in Sheepshead Bay, Kensington, and elsewhere in Brooklyn, thousands of them having availed themselves of the diversity visa program to flee economic hardship at home. Their presence in King’s County paves the way to success for excellent and occasionally halal spots like Tandir Bakery, Emir Palace, and Cafe Kashkar.

So what sets Nargis apart? The fact that it’s in Park Slope, an increasingly exorbitant slice of Brooklyn not particularly known for its sizable Russian or Uzbek population. That’s no small matter.

Every single table at Nargis in Sheepshead Bay was full on a recent Friday. My companion and I ordered markovcha, the classic Korean-Uzbek salad of shredded carrots doused in vinegar, garlic, and chiles. The kitchen piled the vegetables vertically and generously, as if this were a savory cotton candy, balancing notes of sugar, acid, and heat.

The markovcha was piled as if it were a savory cotton candy, balancing notes of sugar, acid, and heat

Bangiyev opened his flagship in 2007, when the food-writing community was laser focused on the East Village and the ascent of David Chang. Nargis started as a 40-seat spot sandwiched between a florist and a dry cleaners, but as those businesses closed, he expanded, raising the seat count over 150 to meet the booming demand.

The chef tells me that non-Russian, non-Uzbek customers were rare in the early days. As the chef himself puts it, “People would say, ‘What the hell is Uzbek food?’” But over the years, that sentiment changed and his clientele diversified. “That gave me the strength to say, ‘Other people besides our own love my food,’ and that’s when I said it’s time to give Park Slope a shot, which I considered the big leagues.”

Still, Bangiyev is likely aware that the former Soviet Union’s diverse foodways — or geography — don’t quite carry the same currency among the so-called food elite as regional Mexican or Thai fare. Hence, a bit of unobtrusive but amusing pedagogy begins every meal in Park Slope. Each guest receives a paper placemat depicting a map of Eurasia, with the restaurant’s country of inspiration highlighted, just in case anyone doesn’t know precisely where Uzbekistan is.

Nargis Park Slope, like its flagship, does not traffic in upscalification. Nothing is a miniaturized, nasturtium-topped riff on something humble and hearty from back home. Bangiyev does not sell overpriced kebabs with wagyu beef or foie gras (though if he did, I bet they’d be grand). The closest thing to fusion or local adaptation is the slice of New York cheesecake.

Bangiyev serves classics. He slicks his beef tongue and radish salads with mayo. He stuffs samsa, flaky meat pies with juicy, chewy bits of beef, lamb, and onion. He forms non (Uzbek bread) into the shape of an old-timey car wheel, as is the style in Tashkent, baking it in the tandoor to a light golden brown. The middle is flat and pretzel-like, like a hubcap, while the round, almost pneumatic exterior is pure bagel chew.

Bamboo baskets of manti — dumplings the size of a xiao long bao — come stuffed with pumpkin, the official gourd of Central Asia. The flesh itself is spiked with a traditional blend of black pepper and raw sugar: just enough sweetness to require a dunking in tart sour cream.

Bangiyev’s charcoal-tinged kebabs rank among the city’s finest. He lets the bamboo smoke permeate, but never overpower, the flesh in question. Skirt steak ($8) bursts with concentrated beefiness. Lamb chuck exhibits a restrained funk, a marked tenderness, and beguiling sweetness. The heat transforms chicken hearts into springy, snappy saltiness, with little sinew or offally tang. And chicken wings stun with their technicality; the gentle cooking renders out all the schmaltzy fats, leaving the skin with a blackened crispness whose texture recalls phyllo and whose complex aromas evoke porcini.

If any of the meats are too fatty, douse them with chile vinegar and cleanse the palate with beer.

Pair the kebabs with plov, the elaborate pilaf that’s essentially the national dish of Uzbekistan. Bangiev cooks it the traditional way, fat-slicked basmati rice heated in a steel kazan over shards of carrots and layers of lamb leg. The flavors are unambiguous: The natural sugars of carrots amplify the funk of game.

At this point, the pain of stomach distension sets in. Quell the hurt with black tea, and order the classic Central Asian wedding dessert, chak-chak. The kitchen stacks crispy bits of fried dough atop one another in the style of a bee’s nest and drenches them in honey.

I started to fall in love with Uzbek fare in the early aughts, when my father would bring home kebabs from Sheepshead Bay, near where he worked. We’d eat the grilled lamb with vodka tonics or red wine while watching the Yankees on TV. Back then, when too many Americans viewed their fellow citizens with suspicion because of the way they looked or the language they spoke, it would’ve been hard to imagine that there’d soon be too many Uzbek restaurants to count in New York, that places like Nargis would be standing room only, and that a Tashkent-born chef would eventually expand not just to Park Slope but to Williamsburg as well, which is his plan for 2018. What a city.

Our review of Nargis Bar and Grill 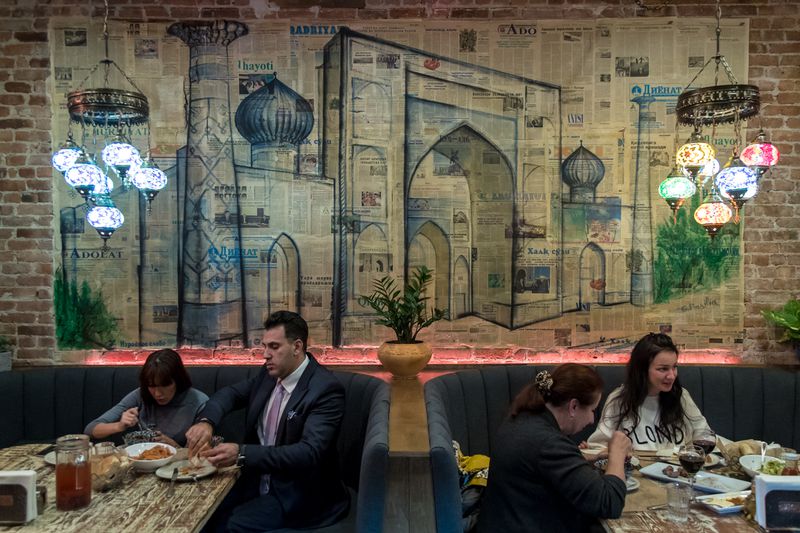 Bonus tip: Food comes out fast, and nearly all at once. Consider ordering starters, along with manti and chuchvara, before moving on to kebabs.