Momofuku Nishi 2.0 Tastes Familiar, But Now With a Grown-Up Setting

A first look at Nishi’s second time around

Share All sharing options for: Momofuku Nishi 2.0 Tastes Familiar, But Now With a Grown-Up Setting

When I first visited Momofuku creator David Chang’s Nishi on opening night in January 2016, it was clearly a work in progress. The service was great and I liked much of the food, which was partly Italian-Korean. But the place was crazy uncomfortable, with cramped seating on tiny, backless stools, tables thrown down at odd angles with multiple bottlenecks, and deafening noise levels.

The restaurant engendered mixed reviews, including one-stars that read like pans from Eater critic Ryan Sutton and Times critic Pete Wells, causing something of an identity crisis in the Momofuku empire. Eventually, the restaurant closed for renovations and recently reopened. Curiosity prompted me to make another early visit.

You’ll barely recognize the space. Done in muted shades of dark green and medium gray, trimmed with blond wood, the room now radiates serenity. A banquette runs on one wall deep into the premises, with semicircular booths scooped out across from it, in a room that comfortably seats 48 and looks a bit like a diner. All chairs have backs and padding. Slightly risqué watercolors in red and gray seem inspired by cave drawings; one shows a woman on a bike with a buffalo head on the handlebars. 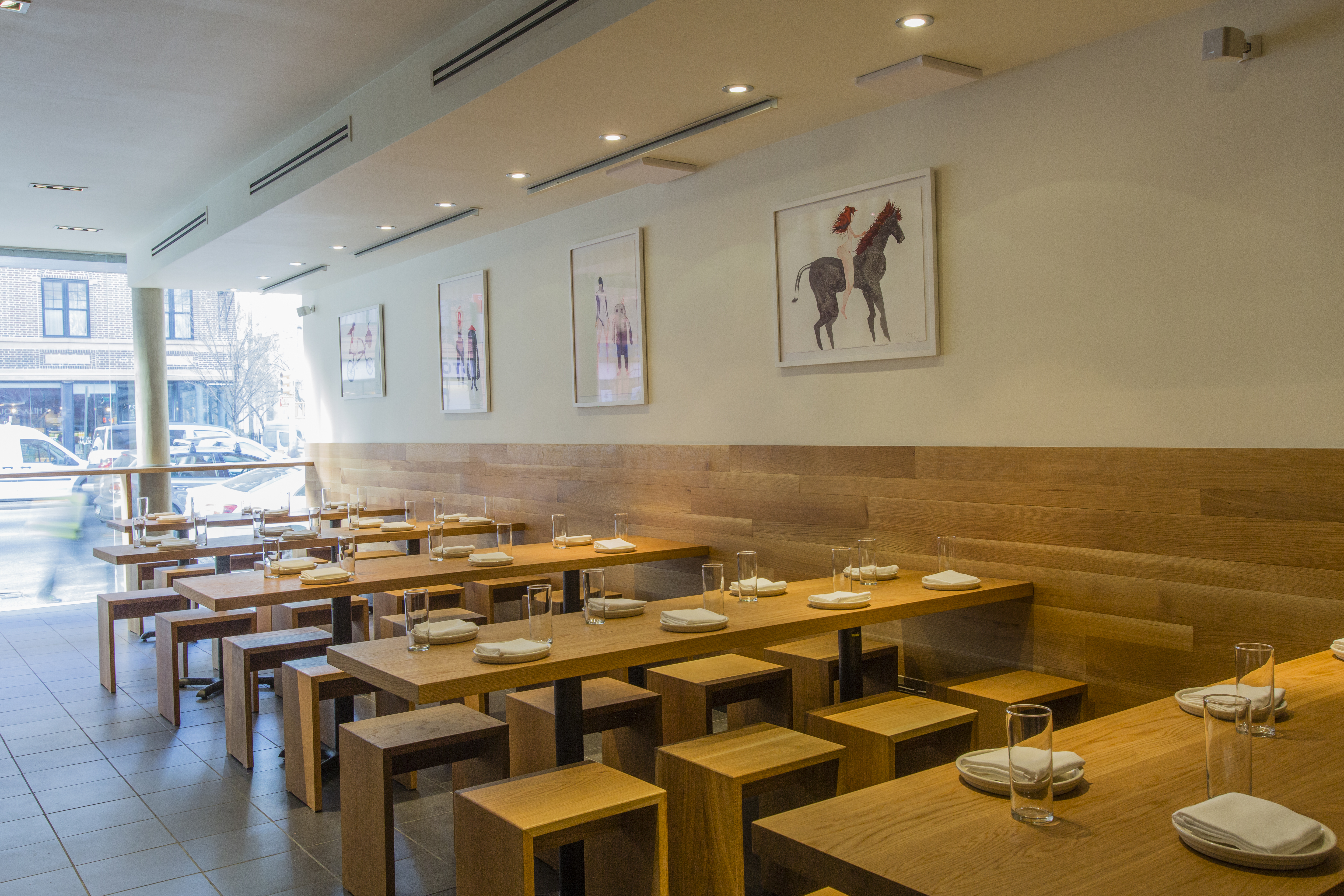 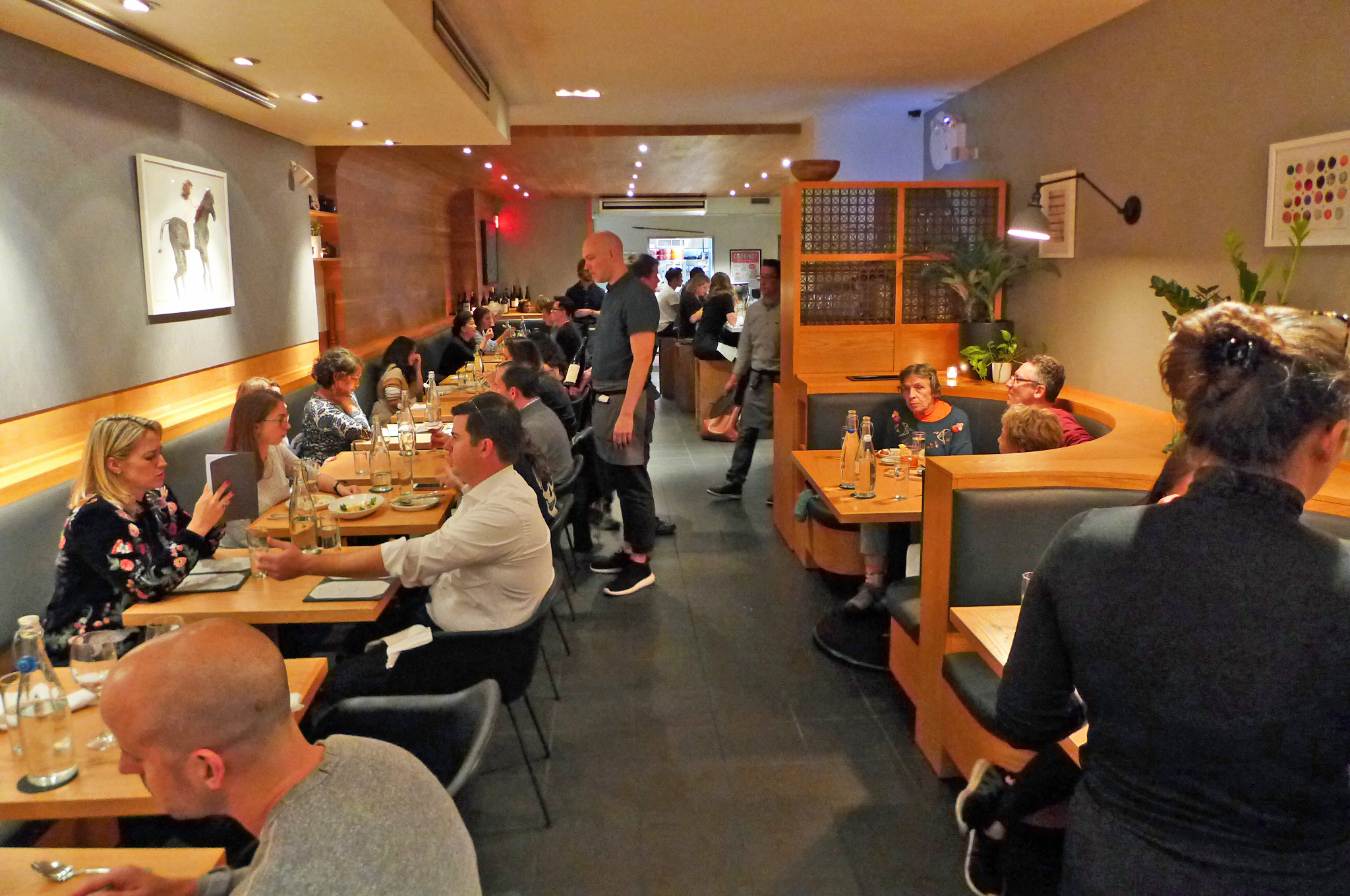 Some of the food represents a departure from the earlier menu, while about half remains virtually the same, but with a few name changes. Chef Joshua Pinsky, who also presided over the old place, has wisely kept intact the epic ceci e pepe — a take on a Roman classic that substituted fermented chickpea miso for cheese. A bonafide hit, it seemed to be on half the tables. The clams grand Lisboa, one of my favorites on the first visit, is now called capellini a la fideos ($22), making it sound more Cuban than Italian.

This toss of slender noodles now arrives at the table in a cast-iron skillet rather than in a bowl; it has been baked so the noodles char a bit and become crunchy on the edges. “Is there some soy sauce in there?” I asked the congenial waiter. “Well, there may be some white soy, but there certainly is apple juice,” he replied — which surprised me, but, hey, the dish remains delectable. As for the Caesar salad, the bagna cauda, again ramped up with walnuts, is now deployed on red endive instead of romaine.

There is a new, opulent salad of butter lettuce and frisee ($12) in a perfect dressing that emphasizes vinegar over oil. The dashi-sprinkled beef carpaccio is gone, as is the raw mackerel, while a version of scallop crudo remains, and a striped bass carpaccio has been added. There is a new spirit to the menu that hints at European multinationalism rather than pan-globalism, and thus some of the Asian elements have been eliminated, or at least toned down.

But they are still there. The pappardelle with duck managed to taste more like a Chinese sweet-and-sour than a northern Italian agrodolce. Wagyu beef ($32), cooked to something between rare and medium rare, sported a brown glaze that tasted like teriyaki, though heaped with a green Moroccan chermoula. But the best things I ate that evening were holdovers from the previous menu: crunchy, head-on shrimp ($15), and a brilliant soft focaccia studded with garlic cloves, offered with a dipping sauce of anchovies and olive oil ($6).

Nishi has set out on a new path, which looks a lot like the old one: a forward-thinking Italian restaurant that might be more at home in Florence or Rome than on Chelsea’s Eighth Avenue. Only now much more comfortable and quiet.