Review and information for Public Kitchen

Those who spend too much time on Food Instagram know that envelope-pushing chefs like to hide pricey proteins beneath canopies of cheaper, well-manicured foliage. Ignacio Mattos of Flora Bar tucks slouchy gobs of sweet shrimp under neat squares of nori; the young kitchen at Contra, in turn, obscures pork collar below thinly sliced radishes. One could write essays tracing the lineage of this technique and spend hours trying to discern its meaning, but the practical effect is unquestionable: Diners experience a gentle surprise in an experience not unlike unwrapping a birthday present.

So the story goes that Jean-Georges Vongerichten, once a culinary trendsetter himself, has brought this technique to Public Kitchen, a new hotel restaurant on the Lower East Side. The dish in question is frico, traditionally a humble Friulian snack of fried cheese crisps. But here, in a hip corner of Manhattan, it takes the form of a large disc of cheddar. It magically hovers above the plate, hinting at something more underneath. Is it a few slices of fatty pork jowl? Nope. The surprise is a handful of stale popcorn. Biting into the dish doesn’t so much evoke opening a gift as it does finding coal in one’s stocking.

The more figurative surprise, however, is realizing that one of the world’s great chefs runs the city’s worst new restaurant.

Public Kitchen is a curious name for a restaurant where a 10 p.m. reservation requires three weeks’ notice, where a handful of fried squid rings runs $14, and where a round of pre-dinner drinks for four, including a margarita whose aggressive sugars recall Kool-Aid demi-glace, costs $83. Then again, Public is a questionable name for Ian Schrager’s parent hotel; weekend rates generally start at $400 after taxes. Those who book seats at the rooftop bar are sent an email asking them to arrive “early and with their entire group, preferably of equal ratios.”

Physically accessing the restaurant requires a journey. Prospective guests walk past a spacious yard, which is a nice place to relax under a real tree with fake leaves, past a series of Tron-themed escalators, past a gift shop hawking $600 sunglasses, and past a pastry counter that sells excellent (if slightly stale) strawberry eclairs. Those who continue to walk back will encounter the restaurant, guarded by a host who, on at least one occasion, knows to reflexively look down at his little host computer (not up to make eye contact) when a patron approaches.

I fondly remember the first time I was escorted past the privacy screens into the restaurant itself. Chefs behind a marble counter retrieved second-rate pizzas from the fiery hearth, while waiters carried plates of zucca pasta with bacon and jalapenos, a preparation whose thin flavors recalled takeout from a mall food court. Brown wood beams crisscrossed the ceiling, a handsome juxtaposition to the (plastic) ivy that hangs in the rear garden. I admired this elegant ballet before sitting down and realizing my right hand was gently sticking to the bottom of my chair, my fingers apparently coated in a veneer of someone else’s soy-ginger sauce. Or whatever it was.

In 2017, Vongerichten is a slightly more complicated internationalist, presiding over an empire of nearly 40 establishments and concepts across the world. A handful of these venues are ambitious and distinctive. In 2010, his ABC Kitchen helped spark our prevailing vegetable- and toast-heavy zeitgeist, while his AbcV, in 2017, continued that trend with bold vegan flavors (and Juicero machines).

But the bulk of his worldwide venues, alas, appear to be bland facsimile spots, peddling wagyu in Cabo, eggs Benedict in Dubai, burrata in Sao Paolo, and fried calamari in Shanghai.

Public Kitchen, according to its website, specializes in the “best of ‘New York’ food, ‘World Food’ really, and all of the cultures that make up the eclectic mix and melting pot that is New York City.” In reality, it’s doubtful that anyone marginally familiar with the five boroughs would identify the bill of fare here as anything other than “international hotel” food. Even Manhattan clam chowder, the accompaniment to grilled salmon (ordered medium rare, delivered medium well), turns out not to be actual soup, but a thin, saccharine, barely spoonable sauce of tomato and chile oil; it’s precisely the type of liquid one might expect to find scrapped off the side of a hot steel buffet.

Dishes with an Asian bent, the chef’s longtime comfort zone, feel less like revolutionary imports and more like they’ve been appropriated from the corporate commissaries of clubstaurants like Tao or Buddakan. Butternut squash potstickers are insipid blobs of sweetness. Raw tuna ($19), which takes the ethereal form of udon-like ribbons at the Jean-Georges flagship, devolves into an indistinct, underseasoned, chile-laced mash at Public; the spicy hand rolls at sushi chain Wasabi in Penn Station would be a more compelling substitute.

And shrimp toast ($22) turns out to be flaccid sticks of soggy, loosely bound crustaceans. Anyone armed with a box of Gorton’s and a toaster oven could achieve more texture.

In the black truffle pizza, the signature fungi paste exhibited the color and texture of wet mud

It’s ironic that a bad meal from Vongerichten, who holds three Michelin stars at his flagship, isn’t something new or out of the ordinary; the New York Times dealt him goose eggs for V Steakhouse in 2004 and Mercer Kitchen in 2006. But as restaurants around town struggle with labor costs and skyrocketing rents, the abject awfulness of Public serves as a cynical lesson for chefs who are transitioning from being brash, we-might-fail-any-day envelope-pushers to conservative middle agers. That lesson is you can still draw in throngs of fashionistas and magazine editors — Public might actually be a tougher reservation than The Grill — with poorly executed greatest hits.

Take the black truffle pizza, a dish Vongerichten offers in too many locations to help pay the rent and serve as a “you’re back at home” totem for jet-set diners. I still remember the first time I sampled it uptown at The Mark, where it was gently crispy and filled with the potent musk of wet earth. At Public, the kitchen charred the exterior crust to a carbonic black, while the interior drooped flaccidly. The signature fungi paste, in turn, exhibited the color and texture of wet mud.

Among New York’s fanciest French chefs, Vongerichten has never been known for particularly compelling service, but the staff at Public find a way to make the concessioners at Yankee stadium look four-star by comparison.

I tell a bartender I’m waiting to eat at the counter. “We don’t really take names,” he replies. After waiting for an hour I finally snag seats and ask for a menu. “What kind of menu?” How about a dinner menu!

I ask how the steak is prepared. The answer: “Rare. Medium rare. Medium. Medium well.” The correct answer is that the strip is marinated in soy and dressed in a fermented black-bean dressing. Neither seasoning does much to salvage the commodity-quality beef, which boasts all the flavor of grilled seitan.

Food comes out as it’s prepared. This means that if you order two pizzas for the table, one comes out as a mid-course, while the second, which you’re happy the kitchen forgot because you’re getting a bit frustrated by the point, magically appears when you’re just about done with your mains. That second pizza, incidentally, isn’t so much an actual pizza as it is an oil-soaked sponge of potatoes, aged Gruyere, and bacon.

Those who find themselves here would be best off ordering the the chile lobster. It tastes like chiles and lobster.

Waiters will push a slightly-above-average tartufo for dessert; the more responsible decision is to leave.

When I try to make a follow-up reservation and see a 10:15 p.m. Sunday-night booking disappear before my eyes, OpenTable recommends I try the clubstaurant Vandal instead. It’s a clever suggestion. Vandal is almost as lousy as Public, but one’s expectations are lower (it’s the Tao Group), and the space is decorated with a collection of murals that are amusing enough to contemplate while hate eating dishes like “New York hot pretzel steak tartare.”

Our review of Public Kitchen 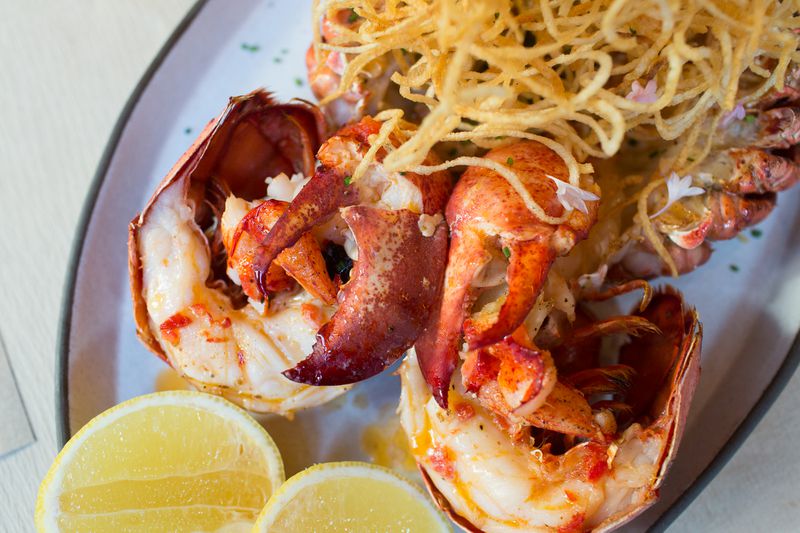 Bonus Tip: If the bartenders fail to offer you water (a possibility), and if you can’t get their attention (a very real possibility), the hotel lobby offers plastic cups and jugs of citrus-scented water, which you can bring back to the bar, which is what this critic did.