Share All sharing options for: Augustine Is an Instant Keith McNally Classic

If restaurants serve as temporary escapes from reality, or at least the weather, one wonders why so many New York establishments keep their spaces as dark nightclubs in the dead of winter. That’s not to say gourmands expect banquettes to double as tanning beds, but as the days grow shorter, the ignominy of using an iPhone flashlight to read a cocktail list grows larger. What this city’s owners and operators need to remember is that just as turning up the volume on a playlist isn’t a surefire way of livening up a venue, turning down the lights doesn’t necessarily cast sexier shadows on the patrons. At some point, you just can’t see the person in front of you.

Keith McNally, a 65-year-old Englishman who’s been courting high society with roast chickens and other unfussy fare ever since he opened The Odeon in 1980, understands the importance of seeing the person in front of you, as well as the fashion editor across the room. This is what brings us to Augustine, McNally’s French-y foray into the Financial District. The restaurant isn’t just brilliantly lit; it’s a veritable cure for seasonal affective disorder.

McNally Gold is the correct term for Augustine’s color scheme, which you’ll also encounter at his other downtown French restaurants, Cherche Midi and Balthazar. This isn’t gold in its Trumpian form, a polished penthouse metal that distorts the face of the onlooker. This is gold as luminescent warmth, a product of faded yellow ceilings, orb-like incandescent lamps, and orange flowers painted on the walls. McNally Gold is a real life Instagram filter, imbuing all of Augustine, from the tile floors to the airy cheese soufflés with a gently-gilded patina. McNally Gold doesn’t quite shimmer as much as it radiates. The aura is such that it offers a clear line of sight from the packed bar up front to the coziest booth in back, and it nourishes all with one of winter’s scarcest luxuries: light.

And for those rolling their eyes at such panegyrics, here’s something equally practical for the colder months: When you walk into Augustine’s double-doored ante-room, you’re blasted by two separate heaters, a central one set at 88°F, and a smaller device on the floor at 92°F. It is the foyer of the century, and it makes taking off your coat feel like mainlining a hot toddy.

Then you walk in and feast on some of the city’s finest raw and roasted meats.

Augustine represents a new culinary benediction of the Financial District, where many of the journalists who cover McNally, myself included, are increasingly being relocated. It also happens to be McNally’s first hotel restaurant, a fact you’ll become acquainted with when searching for the restrooms, accessible via a Judge Dredd-style long walk (through the lobby bar, down a curved staircase, past a private party, and to the left).

The food is good. Very good. I can’t think of a single other new beef tartare that has plagued my daydreams the way Augustine’s has. Chefs Daniel Parilla and Shane McBride lace the raw filet with a lethal dose of the hot sauce-slash-citrus perfume known as yuzukosho. I’ll be disappointed the next time I cut into a humble cabbage leaf and find that it’s not stuffed with jiggly foie gras and heady black truffles, like it is at Augustine. And I’ll sigh whenever I sample a warmed oyster that doesn’t have the briny explosion of the ones served here — they're topped with trout roe, and softened with Pernod butter.

It’s possible dishes like these attract patrons to Augustine. And it’s possible they don’t. Neither bloggers nor gourmands keep track of ongoing gastronomic developments at McNally spots the way they pounce upon hybrid pastries by Dominique Ansel or squid ink ramen bowls by the latest Japanese chain.

When I asked a fellow food writer, a person whose nuanced opinions keep him gainfully employed, what makes McNally restaurants so popular, he responded they’re reasonably effective means to getting lucky in the, ahem, biblical sense. I asked him to elaborate on the nuances of that saucy assertion, and the PG version of his answer boiled down to "that’s just the way it is." I replied that the same could be said of any halfway-competent establishment that sells alcohol. And yet, I kind of see his point. With all the well dressed people behaving better than they would at Tao, though in a more raucous fashion than they would at Le Bernardin, it’s easy to see how hanging out at Augustine can promote a sense of benign promiscuity among a certain crowd. Or something like that. And as is the case elsewhere, the alcohol helps.

A staffer hands me a blend of whiskey, fig syrup, and Branca Menta. It tastes like a peppermint patty and costs me, after tax and tip, over $20. Three young men at the zinc bar, all wearing hubcap-sized watches, pair their entire meal with aged rums in snifters. Two women try to charm a Parisian bartender by tackling the dizzying linguistic acrobatics involved in ordering a Grey Goose & soda in French. Their voices waver after a few seconds, and they switch to English. The bartender serves me the "whisky burger," a juicy, fall-apart brisket blend topped with Comté and onions. And then he hands me the included side dish: a shot of whiskey.

It’s not the type of scene (or beverage pairing) you’d expect at a Danny Meyer joint. If Meyer is the city’s undisputed king of hospitality, McNally is one of its misbehaving princes, always making people happy but never not creating mischief. Last year Meyer penned a thoughtful op-ed for the Times about how high-rents are hurting restaurants. And this year McNally thought it was a good idea to publish this: "It’s difficult not to be anything but fully supportive of a system that protects employees from harassment. But, remembering what it was like to be in my 20s, I believe it’s also important not to throw out the baby with the bathwater."

Let me continue the comparison: As Meyer has spent the past three decades inventing wholly unique establishments with brand-name chefs, McNally has largely occupied himself with opening up the same restaurant over and over again, doling out infinite iterations of a French all-day brasserie — outliers like the Italian Morandi, the beefy Minetta, and the American Schiller’s notwithstanding. Trying to distinguish among, Pastis (RIP), Balthazar, Cherche, and Augustine is like differentiating the various entrants in the Fast & Furious franchise. Dedicated fans have their favorites, and I suppose they’re all good in their own right, but novices are usually best off making do with the latest entrant and having friends fill them in on what they’ve missed elsewhere.

Augustine, true to form, is currently the best of the McNally gang. It’s a fine example of the classic French cooking New Yorkers are falling in love with yet again, and it even equals Minetta in the quality of destination-worthy steak cookery.

Leg of lamb is a proper order for any first timer. McBride and Parilla slather the meat in thyme and rosemary, spin it around the rotisserie for an hour, and slice it rare like roast beef. There is nothing surprising or eyebrow raising about this dish. It is spectacular because it is ordinary. It is simply soft lamb with jus over flageolet beans.

What is eyebrow raising, however, is the location of the fancy Rotisol-brand rotisserie, which is somewhere in the kitchen. Long before modern American chefs decided it would be "entertaining" to have open kitchens, restaurants and even supermarkets treated rotisseries like Ferraris, placing them at the edge of dining rooms so guests could stare off into the distance and watch caramel-colored meat rotate methodically over flames. McNally will have none of those distractions. You come to Augustine to ogle people, not poussin.

Tan chicken thigh exhibits all of the markings of a maitre rotisseur — soft flesh, almost the texture of confit, surrounded by skin that’s more pliable than crisp, a carnivorous Fruit Roll-Up. Order it.

What you can skip is the seafood and crudité platter. Balthazar, in its heyday, seduced many a young culinarian with its towers of oysters, clams, shrimp, and lobster. Augustine’s $85 version, by contrast, is a forgettable pile of overcooked shrimp, bland lobster, sweet snow crab, neutral mussels, and string beans. Halibut en cocotte is a miss as well; the mealy, overcooked flesh sits in a bowl of under-seasoned black truffle jus. This mistake costs $41.

Stick with heartier fare. The foie-gras stuffed cabbage leaf I mentioned earlier is a little gift that accompanies the squab. Stab the bloody breast with your knife and drag it through a lose pâté of the bird’s own liver. Rabbit cassoulet, a copper tin of soft saddle, heady sausage, and white beans buried underneath a carpet of buttery breadcrumbs, won’t win any awards for depth of flavor or execution. But it warms you and feeds you. In this weather, I’ll take it.

A note about the steaks: they’re aggressively seasoned, a move that might aggravate haute-carnivores. No, there’s nothing uncommon about crusting an affordable-ish bistro steak with peppercorns. What makes Augustine’s preparation a bit of an outlier, however, is the fact that this is the default style for a $53 Creekstone strip. The $145 porterhouse, in turn, is crusted heavily in Montreal spices: garlic, coriander, cayenne, paprika, dill, and sugar. The result in both cases is profound and mesmerizing. The Stilton-esque odor of the dry-aged beef is clean and clear on the plate, but as you chew, the blue cheese notes form a quieter background note to the pyrotechnic spices, a vibrating bassline for an electric guitar. There are no other steaks I’m more excited about eating in New York than these.

I sample the strip at the bar, where a stranger presses herself so closely against me while taking selfies it would’ve qualified as grinding if this were a club. A few minutes later I watch as a man escorts his partner into the bar area for the explicit purpose of mansplaining the concept of Augustine. "This is a brasserie, a real brasserie," he says. I consider ordering the baba au rhum I had a few days back, but I remember it being excessively sweet, so I keep things simpler and ask for some rum. I suppose I could have that same rum elsewhere for less (now you know why critics don’t review Johnnie Walker Blue at every new restaurant). And I suppose I could order a fine roast chicken at my local Gristedes for less than $32. But at this moment in time, I would rather have it at Augustine.

What to drink: Cocktails, even though they’re $17 each. Augustine is one of the rare restaurants to have a list of bespoke potables worth ordering (Dale DeGroff is the consulting bartender). Consider kicking off the evening with a Clement, a mix of rum, pear puree, and orgeat, or a Black Irish, a blend of whiskey, branca menta, and fig syrup.

Bonus tip: No online reservations at this time; call the restaurant well in advance for prime-time reservations.

Our review of Augustine 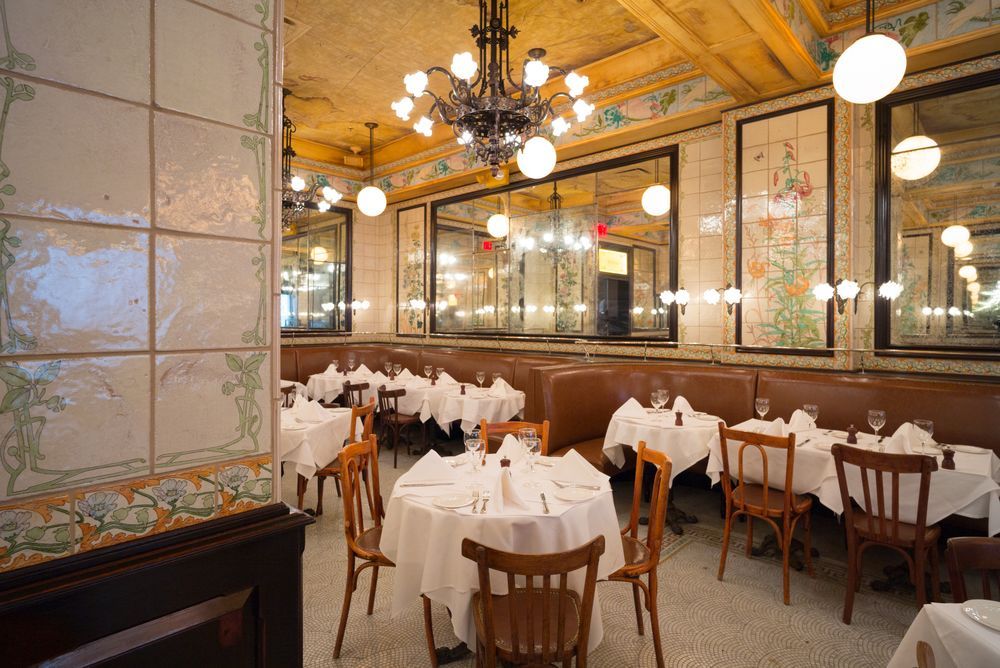 What to drink: Cocktails, even though they’re $17 each. Augustine is one of the rare restaurants to have a list of bespoke potables worth ordering (Dale DeGroff is the consulting bartender). Consider kicking off the evening with a Clement, a mix of rum, pear puree, and orgeat, or a Black Irish, a blend of whiskey, branca menta, and fig syrup.

Bonus tip: No online reservations at this time; call the restaurant well in advance for prime-time reservations.