Share All sharing options for: Bolivian Llama Party Is an Underground Sensation

The food court, once a scrappy lunchtime hangout, has of late metamorphosed into a legitimate culinary destination, a wi-fi wonderland where you hack away on a MacBook while your companion queues up for a $19 lobster roll. It's also called a food hall now, and it is, at its best, a democratizing force. Not only does its structure provides a more affordable way for restaurants to test out their ideas than does a brick-and-mortar location, but it also allows open-palated gastronomes to construct an eclectic meal by traversing only the length of a small shopping mall, instead of a large swath of the city, roaming from poke spot to toast joint without fear of death by vehicular traffic.

Still, the modern food hall, whose labyrinthine layout can evoke a Vegas casino (all the better to keep you inside!), can with all its curation and preciousness sometimes feel better suited for those who view food as only an intellectual and creative pursuit, rather than those who view food as fuel to keep their bodies chugging along. This brings us to Turnstyle, a food hall improbably located in the Columbus Circle subway station, which entirely avoids that. Its purpose feels a touch more utilitarian: to feed you quickly, deliciously, and affordably — albeit not cheaply — with coffee, cold press juices, pastries, poke (alas), and slices of pizza. This makes a certain sense: A subway station is a place designed to shuffle humans in and out as expeditiously as possible, which it does through incentives both positive (the trains are faster than taxis) and negative (it's a sauna in the summer).

A subway station, in other words, is literally the opposite of a destination. And yet, despite the liminal space that Turnstyle occupies — complete with a lack of sufficient air conditioning — there is one single awesome venue within it that manages to make this food hall a culinary draw in and of itself.

Welcome to the Bolivian Llama Party, a plywood kiosk that sells, with fairly little hoopla, the oft-overlooked wares of one of South America's poorest countries. Meet the salteña, a pastry whose braided vertebrae impart it with the look of a Nerf football. Unlike its thinner-skinned cousin, the empanada, the salteña, is filled with jigote: a chicken, pork, or beef soup the density of Campbell's Chunky. Like a soup dumpling, you bite off the tip and suck out the insides. (I wouldn't be the first person to compare it to a xiaolong bao, and I won't be the last: among other things, both the Chinese and Bolivian snacks rely on gelatin to keep their brothy interiors in a solid state before cooking, ensuring against any starchy sogginess.) Be warned that with more sauce comes more responsibility: the chin-dribbling repercussions are, if the pastry is consumed incorrectly, disastrous.

Bolivianos take their salteñas in the morning, and Llama Party, accordingly, opens up at 7:30 a.m. Those who prefer to eat more sugary fare in the early hours will appreciate the markedly sweet taste of the outer shell, far sweeter than a classic American pie crust, and a handsomely yellow hue thanks to the use of aji amarillo peppers. Hold the pastry vertically, and nibble in from the top corner until you strike liquid, about a third of the way down. At this point you could take a spoon and finish off the insides. Don't — you're not eating clam chowder out of a Panera bread bowl. Slowly sip the salteña from the side and treat it like the doughy chalice that it is. When the fragrant liquid is extinguished, pour in a bit of llajua — Bolivian cilantro chile sauce — to spice the remaining meat and hard-boiled eggs with a fragrant, stinging high. 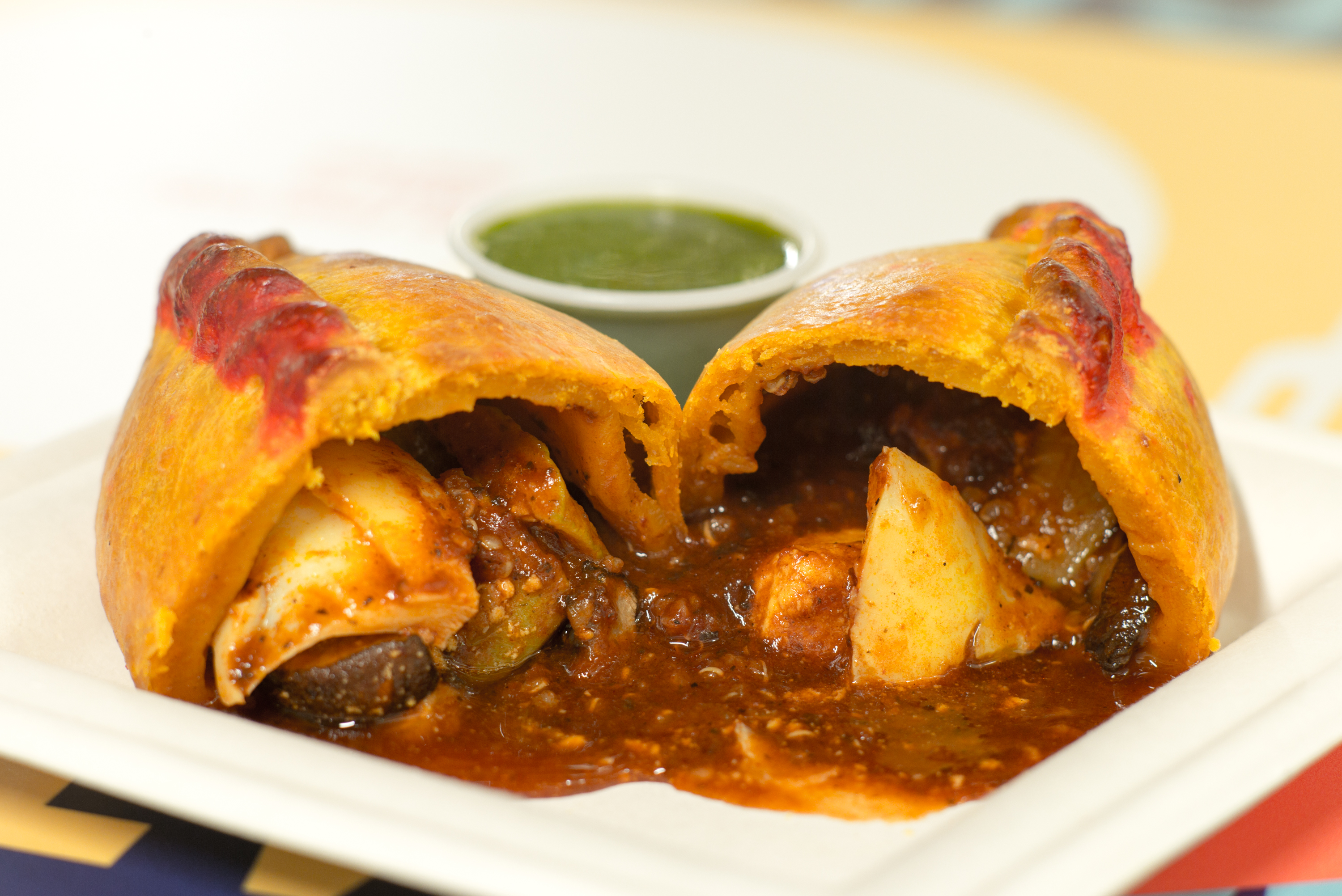 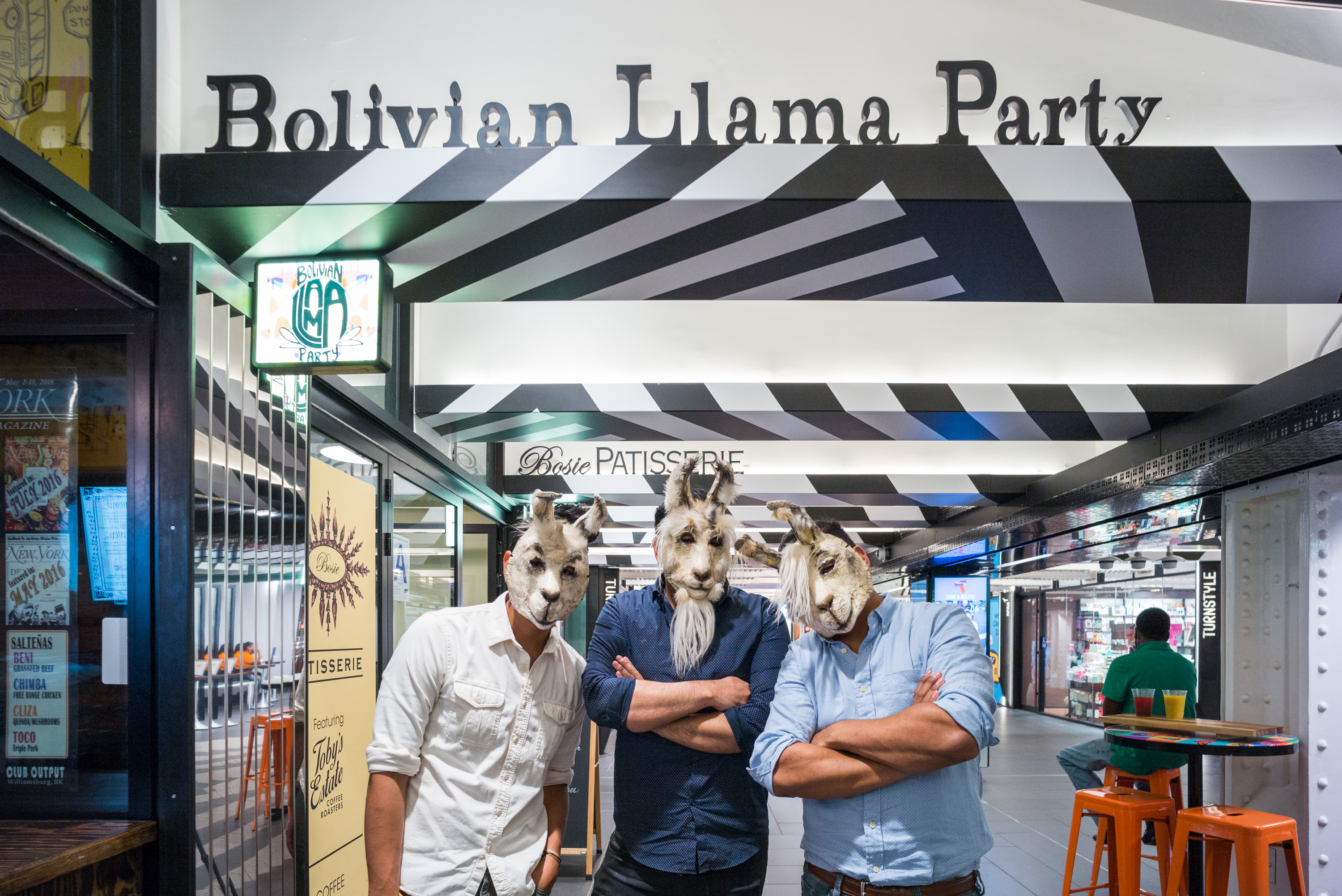 Brothers Alex, Patrick, and David Oropeza, whose parents hail from Cochacamba, a lakeside town in landlocked Bolivia, started selling their salteñas in 2012 at Smorgasburg, and have since popped up as seasonal operations on the Rockaway Boardwalk and at the Williamsburg club Output. Their Turnstyle location, open since April, is the siblings' first permanent endeavor, and arguably the highest-profile Bolivian spot in Manhattan.

BLP, as the restaurant often calls itself, does not not sell alcohol. It does not have table service because, well, there are no tables, nor are there seats. The ceiling is painted mustard yellow (French's, not dijon, topped with doodles of break-dancing salteñas), and the restaurant's official mascot, which hangs on the wall, is a llama mask that's somehow a dead ringer for the evil rabbit in Donnie Darko. Cayenne-spiked fries and a brisket-heart hamburger laced with oregano and smoked salt were the stars at the Oropeza brothers' seasonal locations, but not at BLP, so I won't tease you with them. At BLP, you'll have to make do with the chola sandwich, but this is not a bad thing.

BLP's chola, a reinterpretation of the classic Bolivian pork sandwich, is a swine three way: musky braised shoulder with burnt ends, house cured bacon deeply perfumed with smoke, and sticky chicharron softened by the warmth of all the other ingredients. The sandwich, laced with garlicky mayo (to amplify the richness) and pickled carrots (to cut through the same), packs all the porcine grandeur of Momofuku Ssäm Bar's $250 bo ssäm into a hand-held, $12 package. A brisket sandwich, with the same accoutrements, boasts none of the promised smoke flavor, which is just as well as the dish is rather a study in the concentrated flavor of beef. Eating this salty masterpiece is akin to dining on a short rib sandwich slathered in pan drippings.

It's easy to dismiss BLP as yet another fast casual venue peddling quinoa salad. But that grain makes sense here — the caviar of the starch world (such cute little spheres), is a chief export of Bolivia. The dark story behind the stuff, of course, is that the worldwide demand for the high-protein, grain-like seed has driven monocropping throughout the Andes, and demand-driven price increases abroad have made the traditional foodstuff unaffordable to many Bolivianos. With that in mind, you can skip BLP's quinoa salad, with its mix of greens, cherries, and walnuts. Quinoa nachos, drizzled with spicy homemade cheese sauce, don't pack half the sweet, sundrenched flavor of the superior corn-chip variety; they're also more expensive. An order with a scoop of pork costs $14 before tax.

But you can't avoid quinoa entirely: It makes an appearance in the majestic vegetarian salteña, whose pastry shell holds an incendiary stew of smoky-spicy aji panka, funky oyster mushrooms, and yes, soft quinoa. It's the type of dish complex enough to make a fine-dining chef wish he'd thought it up himself, a perfect menu item for a young, focused venue serving kick-ass food in a food hall, in a hallway, in a subway station, in the middle of New York.

What to drink: Try one of the Bolivian fruit drinks on offer, like the fragrant wild strawberry and blackberry juice with basil.

Bonus tip: This is still a small-scale operation and the wait time varies: You can usually get in and out in about a minute or two; other times you’ll wait ten minutes or more for your food. Be warned also that BLP frequently sells out of certain menu items.

Our review of Bolivian Llama Party

What to drink: Try one of the Bolivian fruit drinks on offer, like the fragrant wild strawberry and blackberry juice with basil.

Bonus tip: This is still a small-scale operation and the wait time varies: You can usually get in and out in about a minute or two; other times you’ll wait ten minutes or more for your food. Be warned also that BLP frequently sells out of certain menu items.