Emily and Emmy Squared Are Two of NYC's Most Exciting Pizzerias

Share All sharing options for: Emily and Emmy Squared Are Two of NYC's Most Exciting Pizzerias

In the mountainous Friuli region of Italy, frico refers to a dish of thinly sliced rinds and shards of Montasio cheese fried into a golden crisp. It is a frugal dish, often made with potatoes or cold polenta, built for surviving winter in the Alps. In the Detroit region of North America, frico refers to the messy, miraculous effect of putting so much mozzarella on deep dish pizza that it spills over the side of the pie and crisps up on the edge of the pan. It is a technique of excess in the land of plenty. And it's exactly what makes the square pies at Emmy Squared in Williamsburg so gosh darn amazing.Motor City pizza has arrived in New York. This is the monster truck of the ambitious pizza world — a weighty pizza for two. On the surface, the style seems familiar: Sicilian-American focaccia-like crust, cut into squares. But the similarities to Sicilian pies (or flatter, crunchier grandma slices) end there.

If there’s sauce on the Detroit pie, it sits partially above the cheese, rather than below. This brilliant innovation leaves the mozz under the sauce white and creamy, while the exposed sections turn brown, bubbly, and blistered. And that beautiful frico, a belt of burnt Maillard goodness, surrounds the fringe of the pie like a paper doily surrounds a cake.

Take a bite. The frico yields like blowtorched sugar on crème brûlée. The thick crust is softer at the top, but requires a bit more chew on the pan side thanks to the golden "underskirt," the term that true pizza nerds use for the bottom of the pie. The pie cools further as you bring it home – which you inevitably will because this is the mammoth steak for two of the pizza world. In the box, the oils start to firm up, fully developing a satisfying heft overnight in the refrigerator. For the true cold breakfast pizza enthusiasts, the ricotta and caramelized onion — evoking a proper tarte flambee minus the bacon — is the right pie for icebox aging.

Emily Hyland, the co-owner Emmy Squared, is not from Detroit. The poet and vinyasa yoga instructor hails from Jersey. Her chef husband, Matt Hyland, is also not from Detroit. He was born in Brooklyn, but raised in Greenwich, Connecticut. Dedicating Emmy Squared to Detroit-style pizza was an accident. They planned to open their sophomore endeavor as a square pie joint, Hyland explained via telephone, but after he anointed his creation with that gorgeous frico crust, he realized that what he ended up with was "accidentally Detroit pizza."

"Forty-five minutes to an hour," the host tells me around 7 p.m. on a Saturday night at Emmy Squared. Around 8 p.m. she’s quoting two hours (during weeknights the wait is often under 30 minutes). There’s your proof that New Yorkers aren’t pizza isolationists. And there’s your motivation to speed things up with takeout. Another reason why takeout is a smart move here: Emmy Squared’s marble bar, hard table tops, stools without backs, and cramped environs make for an uncomfortable, ear-piercing meal.

[The dining room at Emmy Squared]

Emmy Squared serves a mean pile of fries – waffle cut, doused with mayo, and topped with smoky bonito. The restaurant also serves a spicy chicken sandwich bristling with crunch, even if it’s not quite Fuku quality. This is Williamsburg, so there’s the requisite raw kale option for those who like salads as chewy as leather. You could order these things, but then you’d be full before that beast of a pie comes out. The move is to treat Emmy as a restaurant that serves one thing: pizza. And that pizza is most excellent.

Hyland lets the dough rise in the pans, which means lots of pans, about 600 to 700. After the dough rises, he adds the cheese, sauce, and toppings, and bakes the pizza in a gas-fired convection oven (which allows for more stable temperatures than wood) for about 10 minutes. A Neapolitan pie, by contrast, takes about 60 to 90 seconds. While the pizza bakes, all the oil at the bottom of the pan fries the dough – apologies, underskirt – imparting the pie with that golden crust. All this density and crispness is what lets the pie live a second life during takeout and delivery, rather than getting soggy, like a traditional Neapolitan pizza.

I could rate the merits of individual toppings, but really, if you like pepperoni, you’ll get the pepperoni pie. If you’re a ranch person (a Midwestern thing), you’ll order The Emmy, topped with a homemade version of the dressing, vivid with green tarragon. I’m tempted to say don’t be that person, but I’d probably be chased out of town if I did. I will say the Lou Wow is the rare intelligent riff on a hammy Hawaiian pie — it has a wicked coating of chiles on the pineapple to counterbalance the fruit’s natural sugars.

[The Emmy and the chicken sandwich]

And keep in mind that you’re not getting fresh, hand-crushed tomatoes. You’re getting sauce. There’s acidity, but this is more about tomato puree, amped up with wine, onions, and garlic. That richness translates to the overall eating experience. Remember to pace yourself while eating: You’re working with a lot of carbs here. If the standard rule at a Neapolitan pizza parlor is a whole pie per person, at Emmy I’d say anywhere from half to two thirds of a pie per guest is about right.

Just one gripe, because I wouldn’t be a true New Yorker if I didn’t complain about pizza. With pies this gut-busting, would it be the worst thing in the world if Emmy Squared sold them by the slice, especially in the after hours?

The Neapolitan pie, the proud parent of the New York slice, has long been the dominant force in the new wave of big city pizza, but even within that category you find a bevy of styles. In the mid-aughts, classicists like Keste and Don Antonio peddled tomatoes from the volcanic soil of San Marzano, cheese from the overrated water buffalo, and pies that were gently soupy and droopy in the center. More subversive types like Roberta’s forged a more New York-influenced version of the Neapolitan pie, stiffening up the crusts, and throwing on anything and everything, from pastrami to blue cheese to honey to pickle juice. Cracker-like Roman pizzas popped up at Danny Meyer’s Marta, while Sullivan Street Bakery took a different approach to Rome, serving al taglio-style room temperature flatbreads with crimson tomatoes and mandoline-shaved zucchini slices.

This year in particular we've seen pizzaiolos doubling down on anti-traditionalism. Pasquale Jones, at first glance, is a standard New York Neapolitan joint, except those pies are paired with a breathtaking selection of half-bottles poured into what might be the world’s greatest stem: Zalto. Speedy Romeo on the Lower East Side, a spinoff of the Brooklyn original, slings St. Louis-style pies with thin crusts, pickled peppers, square cuts, and melted Provel, the processed cheese blend beloved by Missourians.

New York, in short, has transformed itself into a global clearinghouse and testing ground for regional and international pizza styles. That ecumenical fervor extends even to styles that in earlier decades might have been deemed mere lesser cousins, like the New Haven.

"For a Saturday, our waits can easily hit three hours," a receptionist tells me at the flagship Emily, which opened in Clinton Hill in 2014. Detroit-style squares apparently have not undercut customers’ love of their round pies. This critic sometimes prefers the pies at Emily to the pizzas at Emmy Squared for a simple reason: I can eat more slices before filling up.

The Emily space is smaller than Emmy Squared. It’s a short, rectangular room with a black top bar, brown wood floors, white walls, and various other surfaces that will shatter your eardrums. But put up with such ignominies you will, because Emily is one of the few New York venues that tips its hat to the pizza traditions of New Haven, where venues like Frank Pepe’s and their coal fired ovens produce meatier crusts and more burnished underskirts than their closest analogues – the New York slice.

Five Things to Know About Burgers at Emily

The Hylands serve two mean beef burgers, and both are complicated to order, per the prevailing pre-apocalyptic zeitgeist of making patrons grateful to eat meat. Emily sells a dry-aged burger on a pretzel bun for $26. Emmy Squared sells a grass-fed, wet-aged patty stack with spicy sauce, also on a pretzel bun, for $22. Check out my colleague Nick Solares' reviews for both. But keep in mind that ordering the burgers isn't always easy:

Hyland changes things up a bit though: His pies are classic Neapolitan in their thinness, but lack the signature puffy rim. And he employs a wood-fired oven, which he keeps at a lower than normal temperature to allow for a longer New Haven-style bake, up to two and a half minutes. If a classic Neapolitan pie is more like a filet mignon in its chew, Emily’s version is closer to a skirt steak: It tires the jaw just a hint more, but the payoff is more flavor in the crust, with just enough carbonized char to impart roundness and smokiness rather than bitterness.

The entire awesome experience jolts you to the same carbophilic conclusion as does Emmy Squared: This is among the city’s most unique and exciting pizza.

That said, Emily feels like more of a proper restaurant than Emmy Squared — the latter is more of a stripped-down affair designed to get you in and out. And at Emily, the pies are lighter so it's safe to explore the whole menu. Emily boasts thoughtful cocktails (a riff on the Last Word gets a spray of rose water), impressive specials like spicy Korean chicken wings, and salads that engender daydreams. Try the delicate bibb with corn nuts and tart yuzu, or the bloomin' iceberg, wherein the normally hefty wedge is reimagined as flower petals, allowing the diner to make tiny little vegetable tacos out of bacon and blue cheese.

The pizza menu is also more extensive and complex. Emily divides its pizzas into four discrete categories: the usual red (tomato) and white (no sauce), but also pink (creamy) and green (tomatillo).

Here’s a brief user’s guide: The Emily is the necessary white (i.e. sauce-free) pie for first timers. The mix of pistachios, honey, and mozzarella is a Middle Eastern dessert posing as dinner. The PXG is the best green pie, with chorizo providing a meaty counterpoint to the tart tomatillo. The excellent pink pie is essentially rigatoni alla vodka deconstructed into pizza form. Expect soft bites of fragrant, tomato-infused cream interspersed with extra salty cheese. Just one problem: there’s not enough vodka sauce, so order extra.

Our review of Emmy Squared

What to drink: Cantine Federiciane "Ggragnano," a gently sparkling red in the style of Lambrusco, is your go-to pizza wine.

Our review of Emily 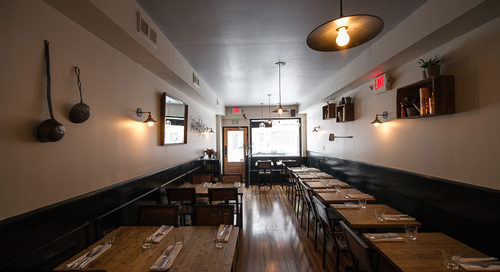 What to drink: Cantine Federiciane "Ggragnano," a gently sparkling red in the style of Lambrusco, is your go-to pizza wine.